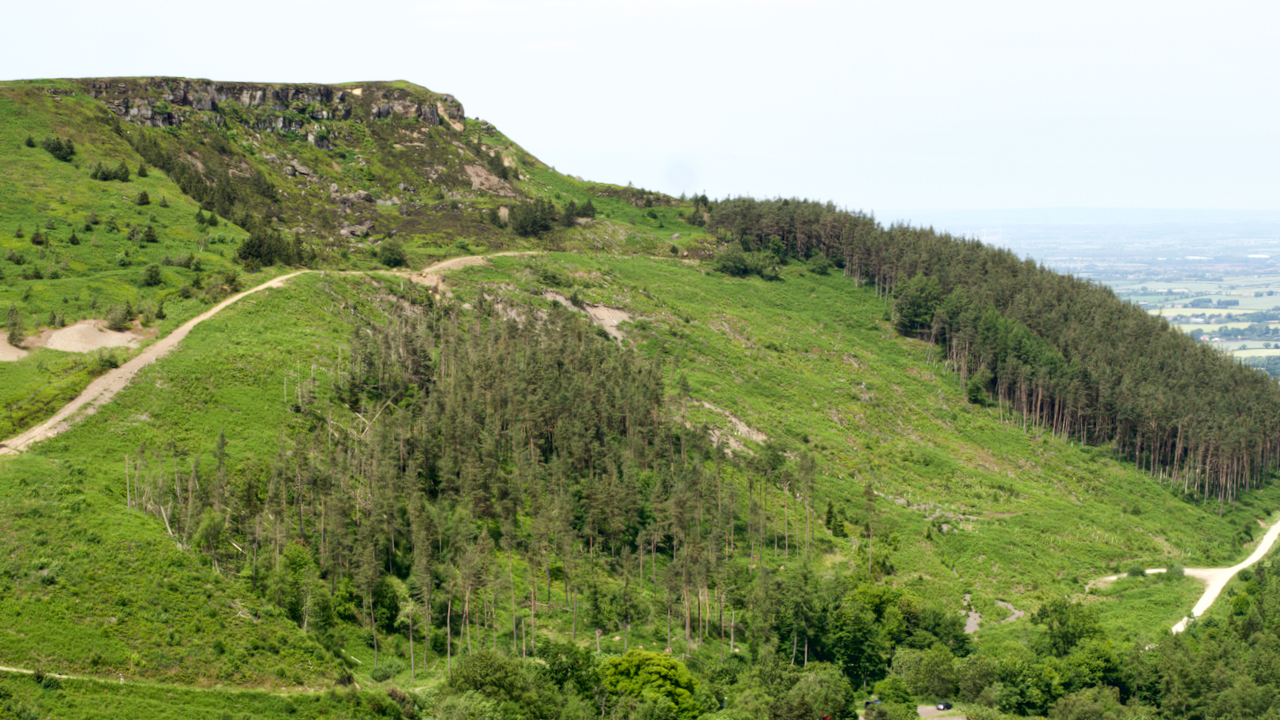 According to the first O.S. Map published in 1857, the prominence is White Hill

IMMENSE LANDSLIP ON THE CLEVELAND HILLS.

At Bank Knott Boundary Stone, which divides the properties of the Earl of Feversham and Lord De L’Isle and Dudley, and at a point on the beautiful range of the Cleveland Hills not far from Cow Scot Gate, which opens into Bilsdale, one of the most extensive landslips ever known in the North of England has occurred. The landslip is of so extensive a character that it is scarcely possible to adequately describe it. It must be seen to be fully realised. Large cracks and fissures of considerable length had been observed for some time past, and it was thought very probable that a slip might occur at no distant date, but one of the present character was never anticipated, and the feeling in the west end of Bilsdale and at the farm houses situated along the foot of the hills is one of intense wonder not unmingled with awe. One alarmed person said that “T’ ‘ills was fallin’ down.” The hill at this place rises, by a very rapid ascent, to a height of many hundred feet above the public highway leading from Stokesley through Bilsdale to Helmsley. This steep incline, from the road to the edge or brow of the summit of the small plateau or table land measures from five hundred to six hundred yards in length. The landslip commenced just on the ledge of the hill and extended along it for a distance of nearly two hundred yards. The whole space fell down, and exposed suddenly to view a rocky perpendicular precipice varying in height from 70 to 80 feet. The enormous weight of rocky debris, shale, turf, and soil, upheaved the earth further down, and the whole glided down the declivity. The rolling masses made a temporary halt a few yards before it reached the road, but it again continued its downward course, and buried the road to a depth of 10 to 24 feet for a distance of 200 yards. It has forced down the high wall skirting the highway, and entered the wood, uprooting some trees, and placing others at various angles, while others of less dimensions have been carried along with the descending mass. It is scarcely possible to calculate or form any idea of the hundreds of thousands of tons of rocky debris that have fallen down, and are still perceptibly moving on in their downward course, and there are unmistakable signs of the slide extending itself, there being a great many fissures reaching a great distance on each side of the present landslip. The sparkling spring situated to the right hand a short distance up the hill from the road has been dammed up by the falling earth, amongst which the water accumulates, and then breaks away, rushes in a muddy current across the road, and lodges against the wall. Nearly thirty acres of the declivity are at present covered with shale ironstone and earth. The noise caused by the falling masses resembled the distant boom of cannon mingled with the sharp report of cracking rifle, and was heard a distance of several miles. This part of the Hills has been extensively mined for jet, and the pillars are supposed to have given way beneath. The large quantity of jet shale thrown out on the side of the declivity, the long continued wet weather, and the late heavy thunder storm which passed over the district, would all give fresh impulse to the loosening masses. Many persons visit the scene daily, and no doubt are well repaid by the wonderful sight, if not by the magnificent view of the surrounding district obtained here. The famous Wainstones and the Ancient British Druidical Logan or Rocking Stone are only distant a few hundred yards from the Sandslip[sic], and would well repay a visit. The question as to who ought to open out the road for conveyances, and how it can best be done, is rather a perplexing one.

The scar produced by the landslip can be clearly seen on the photograph. And in recent years, the pine trees — as opposed to larch — that were planted to stabilise the bank have been felled. I wondered about this, but I guess the geologists and foresters know what they are doing. The upper forest track regularly slumps.

The Gazette article raised the perplexing question about who was responsible for re-opening the road. And it was indeed perplexing, ending up in the High Court of Justice at York Assizes.

In the second half of the 19th-century, the burden of repairing roads lay with the parish, in this case the Parish of Ingleby Greenhow, which was sparsely populated by farmers who had little cause to use the road.

The road was most used by Bilsdale folk to access the markets at Stokesley and Stockton and by the 60 or so jet miners who lived in Great Broughton. Jet mining was mooted to have been the cause of the landslip.

The estimated cost of stabilising the landslip and reinstating the road was put at a phenomenal £100,000. The folk of Greenhow therefore proposed a permanent diversion via Water Beck Farm

. This diversion would add about 2 miles to the journey.

The Bilsdale folk objected, took the matter to court, and won the case. The rate payers of Ingleby Greenhow had to bear the cost by the levy of a special parish rate3Marsey, Brian. “T’ills was Fallin’ Down”. Bilsdale Study Group. 2005..

Enter the Lord of the Manor, Lord De L’Isle, who provided some of the funding. The Bilsdale folk also provided their labour in helping to restore the road.

In 1930, a new road at a lower level was built by the County Council. The old road can still be walked starting at the entrance to Spring House

Intriguingly, The Gazette report refers to some features which I haven’t come across before: ‘Bank Knott Boundary Stone‘, ‘the Ancient British Druidical Logan or Rocking Stone‘, ‘Cow Scot Gate‘.