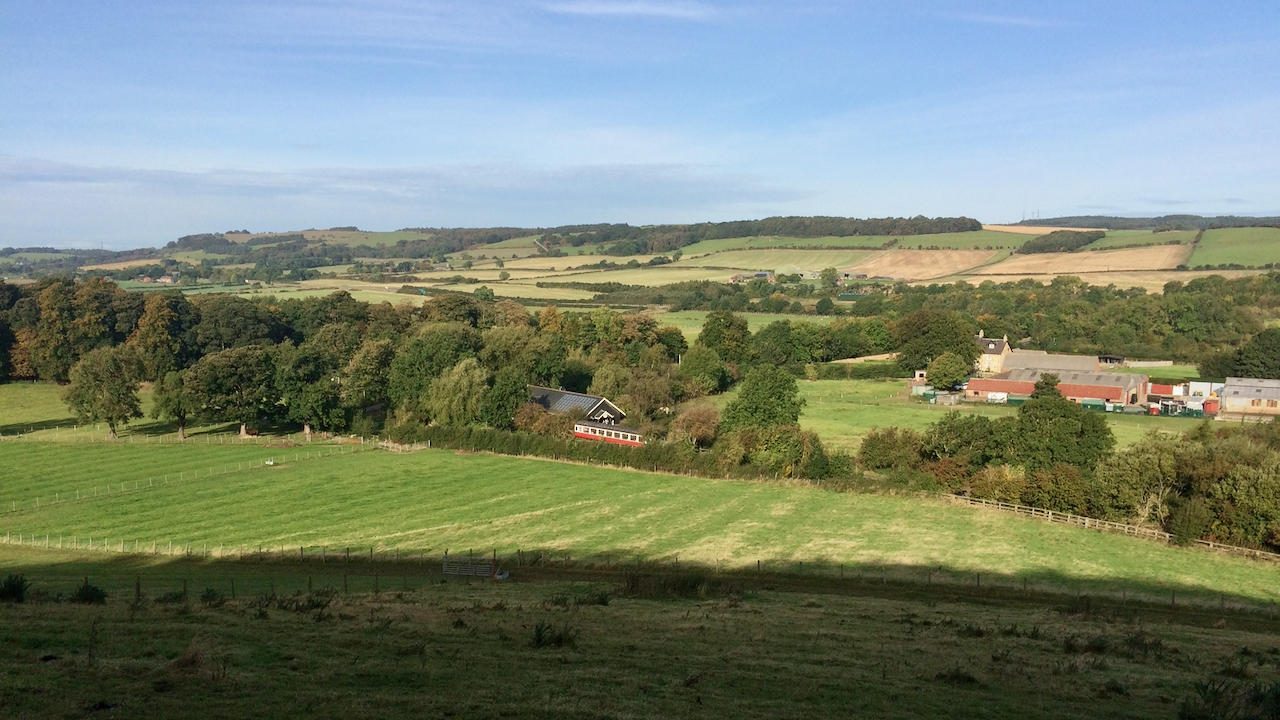 I am very conscious about posting a photo of the same feature or from the same viewpoint. I knew had posted one from this spot before, but I now find I’ve actually posted three, here and here. But whatever; comparison of photos years apart can itself be interesting.

I also forgot that in one of these posts I mentioned the Roman helmet found at Barnaby Grange Farm when the Cleveland Railway Company was constructing their mineral railway in 18641Brelstaff, J. (2021). Environs. [online] Blogspot.com. Available at: https://guisboroughhistorynotes.blogspot.com/2009/10/environs.html [Accessed 11 Oct. 2021]..

The helmet, which now resides in the British Museum in London, is a cavalry one made of thin bronze and has some embossing and lightly engraved decoration depicting the Roman deities Victory, Mars and Minerva. It has been dated to the 3rd century AD2The British Museum. (2021). helmet | British Museum. [online] Available at: https://www.britishmuseum.org/collection/object/H_1878-0910-1 [Accessed 11 Oct. 2021]..

There is some doubt whether the helmet was intended for combat or ceremonial in parades and cavalry sports events.

Barnaby Grange Farm is just right of centre at the foot of the bank known as Barnaby Side. The helmet was found just south of the farm in the construction of a new accommodation road.

Whilst the helmet remains the highlight of the discovery, a contemporary account in the York Herald gives some hints of other finds which unfortunately can not now be subjected to modern scientific analysis3‘INTERESTING ARCHÆOLOGICAL DISCOVERY IN CLEVELAND’ (1864) York Herald, 20 Aug, 10, available: https://link-gale-com.ezproxy.is.ed.ac.uk/apps/doc/R3211104162/GDCS?u=ed_itw&sid=bookmark-GDCS&xid=52c6d290 [accessed 11 Oct 2021].:

The find consists mainly of bones, with a few shells, and with a very curious plate of metal, either brass simply or washed with gold elaborately embossed and engraved. The bones on examination prove to have belonged to one or more species of the aboriginal horse — the extinct ox [unreadable (auroch?)], the swine ,and two species of deer, probably the red and roe-deer. Of the animal last-named only the bones of one individual appear; of the other deer, the ox, and the swine, the remains of several. Comparative measurements abundantly disclose the facts that the horse was scarcely thirteen hands high, with a long head, a broad and vaulted forehead, a stiff foreleg, and a round full sized hoof. One at least of the deer represented must have been a remarkably fine animal, and the bones of the ox testify to at least a capacity to sustain plenty of meat. They were found at a medium depth of 8 feet, and under such circumstances as to lead to the inference that been deposited where found by the agency of a sweeping current of water, inasmuch as they were embedded in a substance consisting of drift matters — sand, twigs, sticks, nodules of wood, shells, and small stones. A considerable period probably elapsed during which the process of deposition was going on, but it is hard to ascertain this positively. That some of the bones had come under the action of human hands is certain, as they were split longitudinally; most of them however, were entire. Still, the split bones and the presence of at least two kinds of seashells can only be accounted for in one way, — the stream, which in its flooded action deposited the mass of bones, swept close by some human settlement or residence. The presence of so many bones of an extinct ox refers the period to a very remote date. The metal object is, as mentioned above, curiously and elaborately engraved and embossed, the raised effigy of two snakes, with their heads in close juxta-position, and their bodies and tails encircling the central portion, forming the chief features of the ornamentation. The metal is not tarnished, nor yet delved or indented, nor even scratched — circumstances which show that it could scarcely have been rolled over and over by the action of the impetuous torrent, capable, at least at times, of moving bones and stones of many pounds weight. Besides being, as it is, folded twice in the direction of its length, so that one fold overlaps the other, and then doubled across, it irresistibly conveys the idea that it was thus treated in order to facilitate conveyance, or possibly, rather, concealment ; and this notion is confirmed by the fact that it was found buried about a foot deep in a gravel bed and under strikingly different circumstances from the bones. It may have been the of plunder or theft, and concealed in the belief that it was a costly metal, and never reclaimed from its concealment. It is difficult to allege either its origin or its purpose. Folded as it is, but too little of its design can be made out. At present the writer would be inclined to assign it to a late Celtic or very early Anglo-Saxon period, but even this must be received with great caution. Still, the whole find is one of extreme interest and curiosity.

The age of the butchered bones is the obvious unanswered question. Are they mesolithic or contemporary with the Iron Age hillfort on Eston Moor? And how did the seashells come to be deposited at an altitude of 100m? As for the helmet, was it loot or a trophy of war?