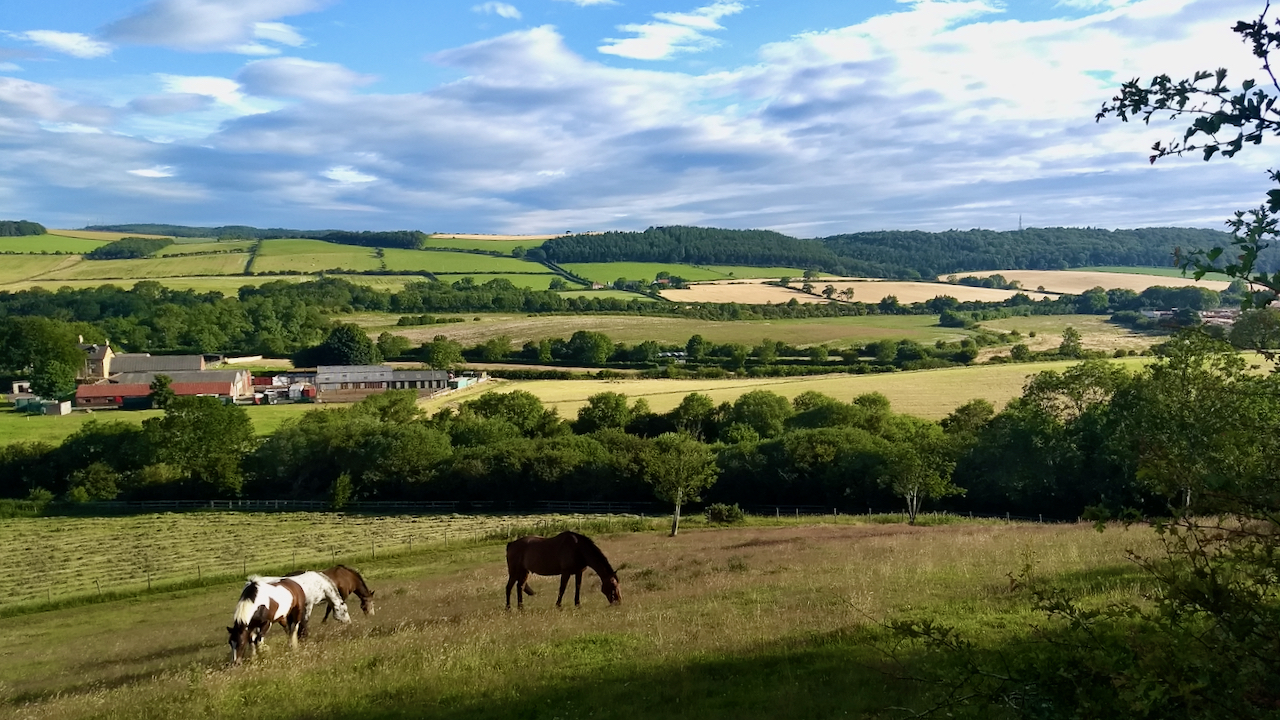 A ‘swang‘ is a Yorkshire term for a low-lying piece of grassland that is liable to flooding. To the left of the photo, the drainage is west to the River Tame and eventually the Tees; to the right, the flow is east into the North Sea at Saltburn. In between, the contours are vague and it is difficult to decipher the precise watershed.

Surprisingly, or maybe not, there are points of interest spanning two millennia of history that can be picked out in the photo.

In the distant far left, at Barnaby Grange Farm (just out of sight hidden by trees) a bronze Roman helmet was discovered in 1864 during the construction of a road leading under the Cleveland Railway. This area is not renown for its Roman sites known. In fact, there isn’t any so it’s a bit of a mystery how it arrived here. The helmet is now on display at the British Museum in London.

The Cleveland Railway ran along the bottom of the far hillside and was built to rival the Middlesbrough and Guisborough Railway which line is marked by the trees beyond the horses. The Cleveland’s promotor was Ralph Ward Jackson and aimed to cater for the ironstone mines north of Guisborough and of East Cleveland. The Middlesbrough & Guisborough Railway which was opened in 1853, served Joseph Pease’s mine at Codhill. Although passenger services started a year later, it was very unpopular with the townsfolk of Guisborough. I have often thought the rivalry between the two industrialists would make a good novel, especially with a bit of ‘Romeo and Juliet’ style romance thrown in.

The Cleveland Railway was shortlived. Both railways were taken over by the North Eastern Railway in 1865 and the Cleveland was closed in 1873 after being operational for only twelve years. The Middlesbrough & Guisborough was closed from Nunthorpe Junction in 1964. It is now a countryside park and walkway.

The cluster of buildings on the left is Lowcross Farm, the location of the tithe barn I posted a week ago. The farm was Crown land and when the tenant, Scarth Boyes, died in 1843, the farm was re-let by tender to William Simpson of Nunthorpe. Ten years later the railway came past.

The final point of interest is on the skyline to the right. Look closely and you can see a mobile phone mast just poking above the trees. This is on the site of Park House, the original seat of the Chaloner family. It was demolished in the 1970s so a few photos exist from which it has been estimated the house dated from the 1660s so would have been built by Edward Chaloner (1625 – 1680). The house was in a medieval deer park and would have had superb views over the vale to Roseberry but it was remote from the town. Consequently, in the early 18th-century, Edward’s son, William Chaloner, had Old Hall built in the grounds of Guisborough Priory.

Incidentally, Edward’s uncle, Thomas Chaloner, was one of the judges who signed the death warrant of King Charles I in 1648.