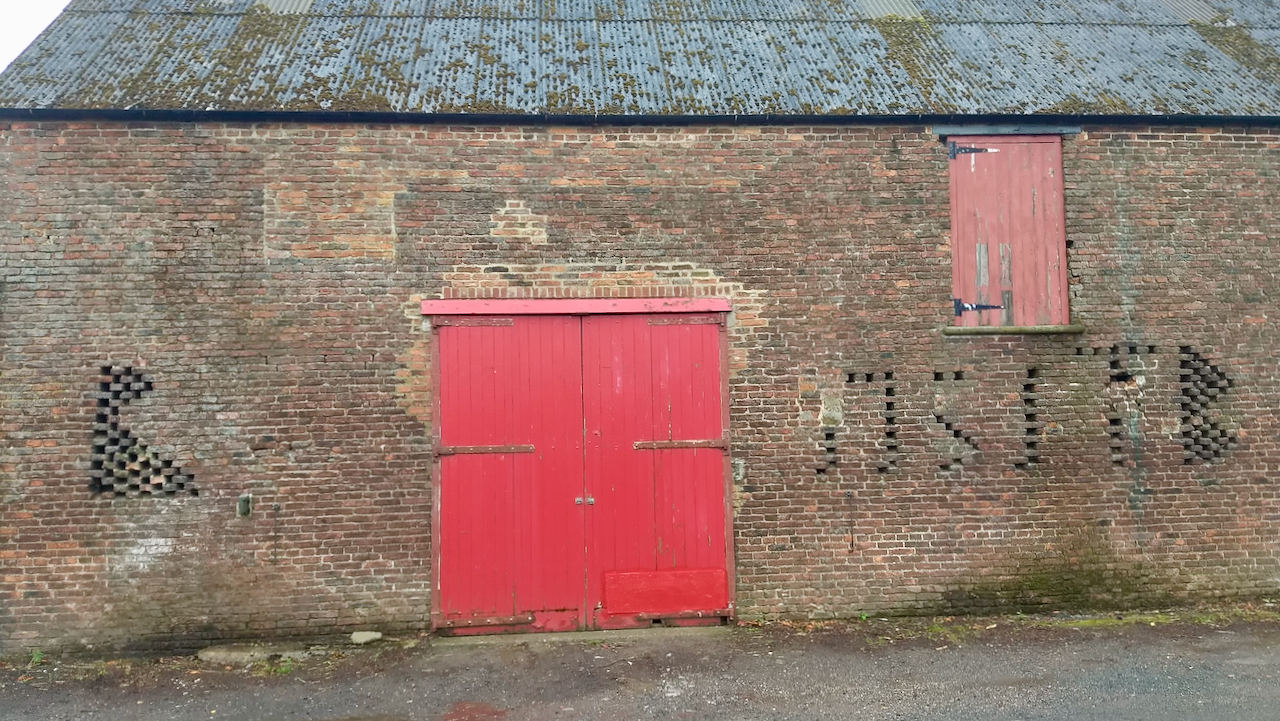 I remember being intrigued by the wall of this barn when driving past it on the old road which went through Lowcross Farm, near Pinchinthorpe. The farm has long since been by-passed and the memory had faded but a recent visit to the stables there worked a few brain cells.

The holes are for ventilation, necessary to prevent stored crops from spoiling. They seem to be in the shape of characters. A date of ‘1751’ is discernible and, if the right-hand two are the letters ‘T B’ then the left-hand one must be an ‘R’. What does this all mean?

I found the answer in Grace Dixon’s 1991 booklet “Two Ancient Townships – Studies of Pinchinthorpe and Hutton Lowcross”. The design should say ‘R Y’ for Ralph Yoward and ‘1751 T B’ denoting its use as a tithe barn. This was where the grain contributed by the manor’s farmers (one-tenth of their produce) to the Church was stored.

I’ve posted about Ralph Yoward not so long ago. He became Lord of the Manor of Hutton following the death of his father in 1751. So it seems he must have wanted to make a grand statement of his new status.

The ‘Y’ must have disappeared when the double door was added, however, that would put the two letters quite far apart as there is no sign of infill brickwork next to the ‘R’. The ‘1’, ‘5’, and the ‘T’ all have had some infill.

The other interesting thing to note about this barn is the brickwork itself. It seems a bit haphazard. Aesthetically, one would expect some uniformity in the laying of the courses, especially for a statement building. Commonly in the 18th-century, English Bond would have been used; where alternating courses of bricks are laid lengthways (stretchers) and crossways (headers). English garden wall bond has three courses of stretchers between every course of headers. Scottish bond has five. American bond can have any number between three and nine courses. If you look closely at some of the original brickwork on this wall, keeping away from the holes, there is a right mixture. Sometimes three, sometimes six, sometimes seven courses between the headers.

There may well be a design to it, but I can’t see one.