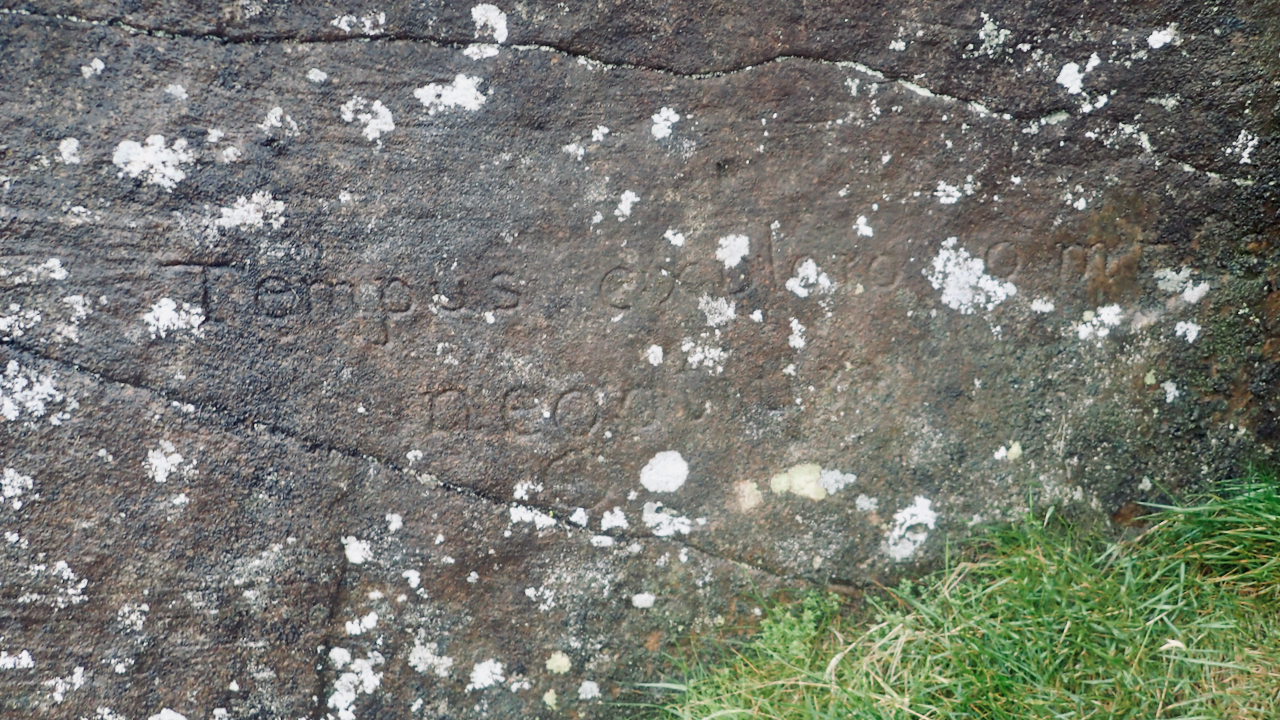 Rather poor Latin, I’m told. The belief is it’s intended to mean “time reveals every affair”. My ‘O’ level Latin didn’t much help. And reputedly carved by a monk, although I can’t remember where I picked that up from.

Google, however, says it’s “every time to explore business”. Hmmm, not sure about that.

Another website translates it as “I’ll try anything once and everything in time.”

As you can see, another day I was struggling to find a photo. Ran from the Lords’ Stone to Clay Bank in thick mist, only seeing one other person.

“Time reveals every affair”, I like that. Seems quite topical.

So back to that old chestnut, Capt. Cook.

The toppling of Edward Colston’s statue in Bristol has ignited a fuse about our own James Cook’s various memorialisations in Cleveland. See my post from the beginning of the week. Facebook is now seething with sundered views. One local Tory MP has made a complete fool of himself by getting basic facts about Auschwitz completely wrong. Teesside’s mayor has taken the opportunity to score points.

And now our Prime Minister, Boris Johnson, has chipped in with the remark that the removal of statues is ‘to lie about our history’.

That is one of the main tropes that I see repeated on Facebook. Statues are our heritage, we must not hide our history.

The fact is that the memorials themselves more often than not hide history. They are a veil designed to suit the history that the promoter of the memorial wants the world and future generations to see. And to hide that he doesn’t to be seen.

Take Captain Cook’s Monument, for example. Erected in 1827 by Robert Campion, a Whitby based banker, 47 years after Cook’s death. The idea of a memorial to Cook had been talked about for 40 years but attempts to gain public subscriptions for the cost of one on Eston Nab failed.

Eventually, Campion took up the idea himself, funding the monument and building it on his land on Easby Moor. Surprisingly Campion was known for his philanthropic contributions, particularly to abolitionist causes.

The inscription, so problematic today, was added later and written by Dr. George Young, a Presbyterian minister, also from Whitby. Young died in 1848 so the current inscription was placed on the monument between 1827 and 1848. Campion died in 1866 so would have approved of the new inscription. To modern thinking, this seems at odds with his abolitionist views.

So the glorification of Cook was well underway a decade after his death although obviously not enough to command sufficient public funding for a memorial. Cook’s celebrity, if that’s the right word, would have begun after upon his return from his first voyage. For both the Crown and the Royal Society, it was a very successful expedition. It is only now, 250 years later, that, although the aims of the expedition were achieved, we learn that Cook undoubtedly disregarded his Admiralty orders both in the precise wording and in spirit.

The Royal Society, a ‘learned society’ interested in promoting science, successfully petitioned King George III for financial support for an expedition to observe the Transit of Venus from the Pacific. The Admiralty agreed to supply a ship and crew for the voyage. That was ostensively the aim of Cook’s voyage.

But Cook had secret orders from the Admiralty which he could only open once at sea:

You are also with the Consent of the Natives to take Possession of Convenient Situations in the Country in the Name of the King of Great Britain: Or: if you find the Country uninhabited take Possession for his Majesty by setting up Proper Marks and Inscriptions, as first discoverers and possessors.

In addition, the President of the Royal Society, James Douglas, 14th Earl of Morton, issued to Cook various ‘hints’ which read like an 18th-century equivalent of a modern humanitarian text. These ‘hints’ were copied to the two Royal Society representatives on board, Joseph Banks, a botanist, and Daniel Solander, a Swedish naturalist. This is just an extract:

To exercise the utmost patience and forbearance with respect to the Natives of the several Lands where the Ship may touch.
To check the petulance of the Sailors, and restrain the wanton use of Fire Arms.
To have it still in view that sheding the blood of those people is a crime of the highest nature:— They are human creatures, the work of the same omnipotent Author, equally under his care with the most polished European; perhaps being less offensive, more entitled to his favor.
They are the natural, and in the strictest sense of the word, the legal possessors of the several Regions they inhabit.
No European Nation has a right to occupy any part of their country, or settle among them without their voluntary consent.
Conquest over such people can give no just title; because they could never be the Agressors.
They may naturally and justly attempt to repell intruders, whom they may apprehend are come to disturb them in the quiet possession of their country, whether that apprehension be well or ill founded.
Therefore should they in a hostile manner oppose a landing, and kill some men in the attempt, even this would hardly justify firing among them, ’till every other gentle method had been tried.
There are many ways to convince them of the Superiority of Europeans, without slaying any of those poor people.

Transcripts of both of these documents can be found here and here.

These two documents say to me two things. Firstly, even though the ‘secret instructions’ specifically instructs that Cook must have the ‘consent‘ of the native peoples, it is difficult to imagine how Cook could have reconciled the documents.

And secondly, there was a scientific community that was at least aware of the potential impact of a violent takeover of an occupied land.

So was this awareness forgotten once Cook had successfully returned with Banks’ glowing reports and scientific specimens? Perhaps this was when the mythology of Cook began. When the end justified the means.

Cook died in 1779. Colonisation of Australia began in 1788 with the establishment of a planned penal colony at Botany Bay.

It would be interesting to research the progress of the mythology. Did it explode after his death? Eulogies are invariably complimentary to the deceased.

The removal of commemorative statues will not remove history but might well hide one view of it. A view that is uncomfortable. But any removal needs a replacement, ideally, one which shows the comfortable and the uncomfortable.