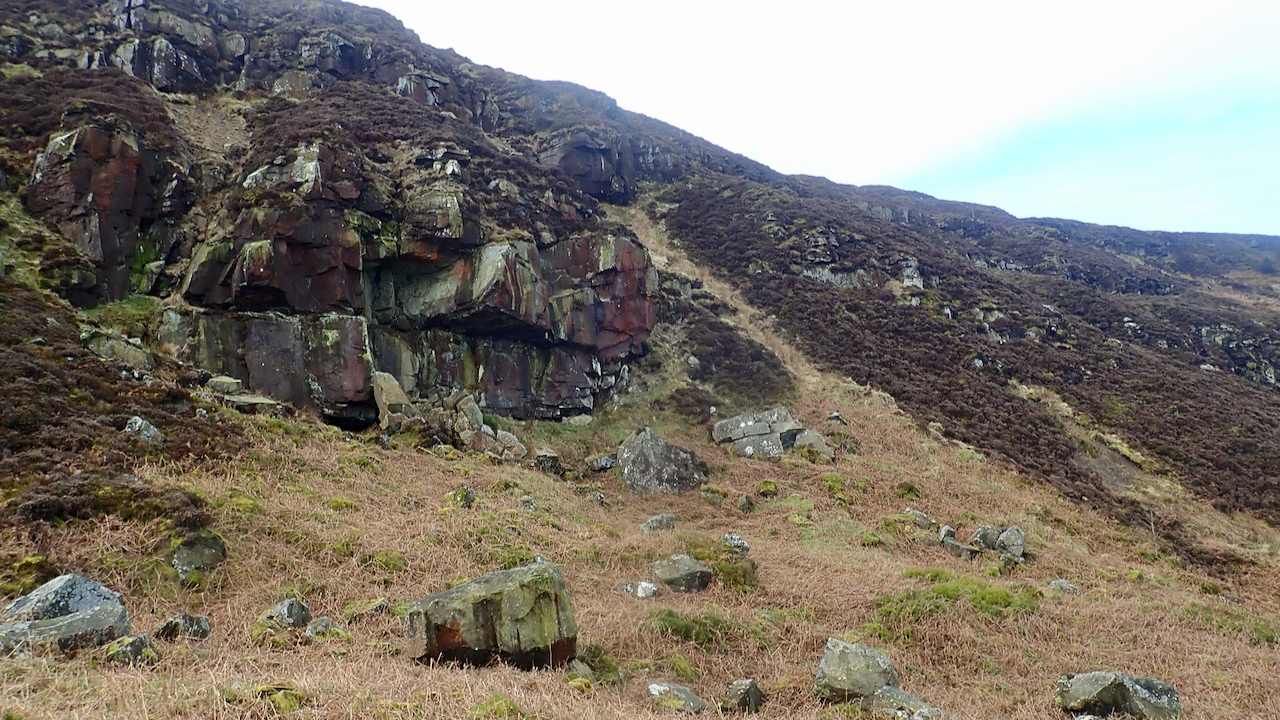 Last night I found a book I had forgotten I had, tucked behind the book shelves. Tom Burns Scott has written extensively about the North York Moors. In this book, he wrote of an engraving in an old quarry face on Cringle Moor that records “a change of ownership of the Dromonby estate in 1732”1Burns, Tom Scott. “Round and About The North Yorkshire Moors: A Glimpse of the Past”. M.T.D. Rigg Publications. Reprinted 1989. Page 35.. I had found my mission for today.

Burns also wrote it was “close” to the ‘Tempus exploro omnis negotium‘ inscription I posted about last year, so a good place to start. Contouring along the base of the crags was quite challenging and I eventually ended up at a crag with a large overhang which the climbers call ‘Cringle Crag’.

The crag was just above a significant hollow caused by a glacial landslump which had exposed the narrow band of Saltwick Sandstone2“BGS Lexicon of Named Rock Units – Result Details.” Bgs.ac.uk, 2020, webapps.bgs.ac.uk/lexicon/lexicon.cfm?pub=SWK. Accessed 9 Mar. 2021..

But there was no trace of any 18th-century inscription. Some obvious modern graffiti. There had been a not so recent rockfall I noticed. I continued descending to the hollow.

Here, there was evidence of quarrying activities providing stone for local buildings. Some dry stone wall foundations for a small shelter. It looks like rock from the crag was dislodged, allowing it to tumble down to the hollow where it was split into blocks suitable for sledding down to the village. The quarry was particularly active in the 1750-1850 property boom3“Kirby Bank Heritage Trail”. Kirby, Great Broughton & Ingleby Greenhow Local History Group. Leaflet. www.kgbighistory.co.uk. Sept. 2016.; later than Burns suggested but I guess the stone would have been quarried spasmodically as and when required.

It was then that I noticed a square shaped feature on a much smaller crag further along the contour. Back up I climbed.

I found a recess, definitely manmade, and there seemed to be traces of letters but they were to weatherworn for me to make out.

So, a failure. Mission not accomplished. But a good morning’s outing.