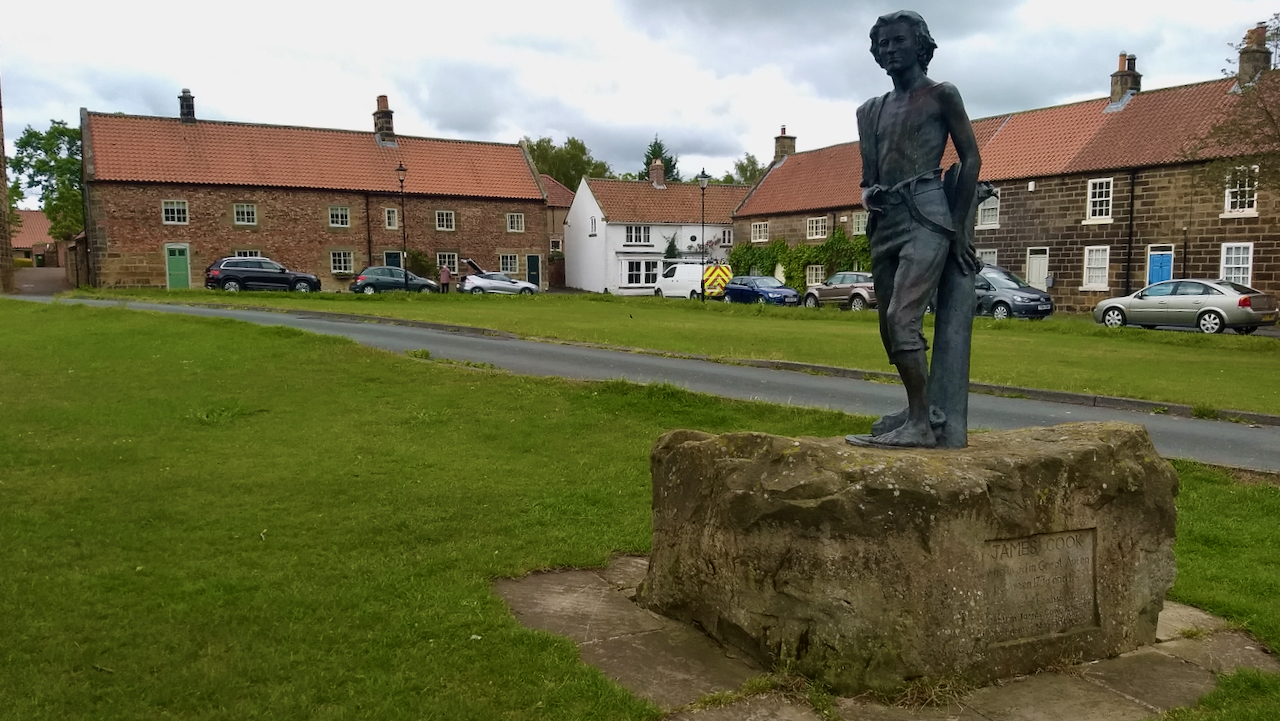 The recent events in Bristol when Edward Colston, deputy governor of the Royal African Company which oversaw the transportation into slavery of an estimated 84,000 Africans plus another 19,000 who did not survive the sea voyage, ended up at the bottom of the harbour, raises questions closer to home. Whilst not condoning the criminal aspects of the deed, it is criminal that the statue, offensive to many Bristolians was actually still in place.

In Great Ayton and Middlesbrough, Captain James Cook is venerated. In 1827, a monument was erected to commemorate him on Easby Moor, there are dedicated museums in Great Ayton and Stewart’s Park. There is at least one school named after him and school houses after his ships. There is a Captain Cook Way, a Captain Cook Square, Captain Cook’s Crescent. In Great Ayton, where the young James Cook lived and attended the village school before navigating the world, the statue in the above photo of him as a boy was unveiled in 1997, taking pride and place on the High Green. The Bottle of Notes sculpture in Middlesbrough is in the form of handwriting taken from his diary. And then there’s Whitby which has its own statue and memorials.

Yet to the indigenous people of Australasia, Captain Cook is vilified as a murderer and looter. Kidnapping people to get his way, killing them if they resisted, stealing at will, and knowingly allowing devastating sexually transmitted diseases to spread through his crew. And a portent of their future colonisation, assimilation, and oppression. Such statues and memorials are deeply offensive to these people. Their voices are loud but are only faintly heard in this country.

But not entirely unheard. In March this year, before lockdown, paint was daubed on the plaque on Capt. Cook’s Monument, a plaque which says:

“… while it shall be deemed the honour of a Christian Nation to spread civilisation and the blessings of the Christian faith among pagan and savage tribes, so long will the name of Captain Cook stand out amongst the most celebrated and most admired benefactors of the human race.”

Cook’s responsibility for these clearly deplorable and immoral actions, either directly or indirectly, may be mitigated by saying he was a child of his time, a child who was the son of a farm labourer and who, through talent and ambition, rose up the ranks of the Royal Navy and who was under orders from his King and a duty to put his ship and crew first.

My fear is that the fate of Edward Colston’s statue may encourage these protestors to take ever more extreme measures. But would it not be better if we recognise now the deep hurt and anger that the name James Cook induces in our neighbours even when they are on the other side of the world?

Maybe for starters, an interpretation board giving the context of the inscription and the views of the indigenous peoples of the South Pacific?
 Open Space Web-Map builder Code

2 Replies to “What shall we do about Capt. Cook?”