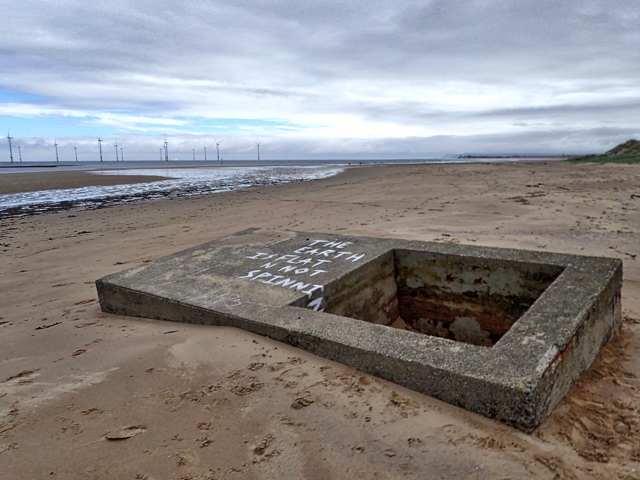 I went orienteering today … at South Gare, a complex area of sand dunes and reclaimed land created over 150 years of iron production. A bit rusty. Should have picked an easier area. A leg along the beach went past this World War II pillbox almost buried in the sand.

Pillboxes were hastily constructed after the fall of France in June 1940 as a defence against an expected German invasion. The intention was to primarily slow down an invasion to give time for reinforcements to be brought in. There were several ‘standard’ designs and for the pillbox spotters amongst us this in fact a Type FW23. It was made of concrete and comprised two compartments, one roofed with three embrasures or gun openings and an open section at the rear for a light anti-aircraft gun. It would have actually been built on top of the dunes which now lie 50m or so behind. In the 76 years since it was built the dunes have gradually been eroded away and the pillbox has not only dropped to beach level but is still slowly continuing to sink below the sands.

But what is the meaning of the graffiti?