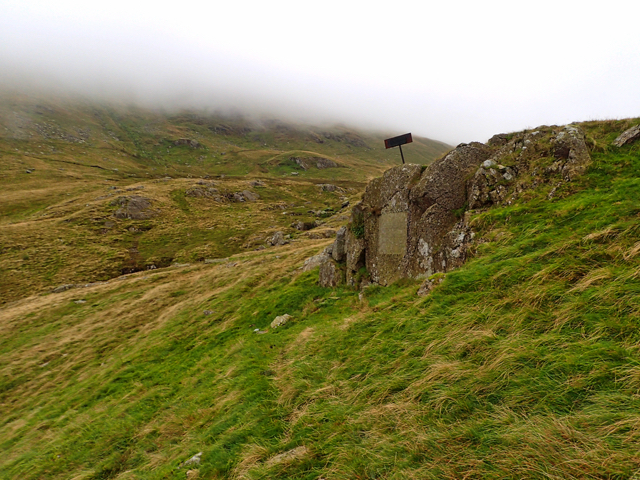 ​It was pretty grim on Fairfield today. I had expected an hour an an half to kill waiting for my DoE group to summit so I put on all my spare clothes, got the bivvy out, and hunkered down behind the low summit shelter to listen to a Radio 4 podcast. Half an hour later they turned up. Brilliant.

On the way down via Grisedale Tarn, the mist cleared so instead of a silouette of sheep looming out of the mist I thought the Brothers’ Parting Stone would be a better posting. It’s situated just below the outflow 50m or so away from the modern path. It was here that at Michaelmas, 1800 William Wordsworth said goodbye to his brother, John, who was a sea captain and was about to set off on a voyage to the East Indies. His ship, the Abergavenny, was wrecked in 1805 and William never saw his brother again.

The carved inscription on the stone is unfortunately too weathered to be readable but the all knowing Wikipedia quotes it as:

Here did we stop; and here looked round

While each into himself descends,

For that last thought of parting Friends

That is not to be found.

Brother and friend, if verse of mine

Have power to make thy virtues known,