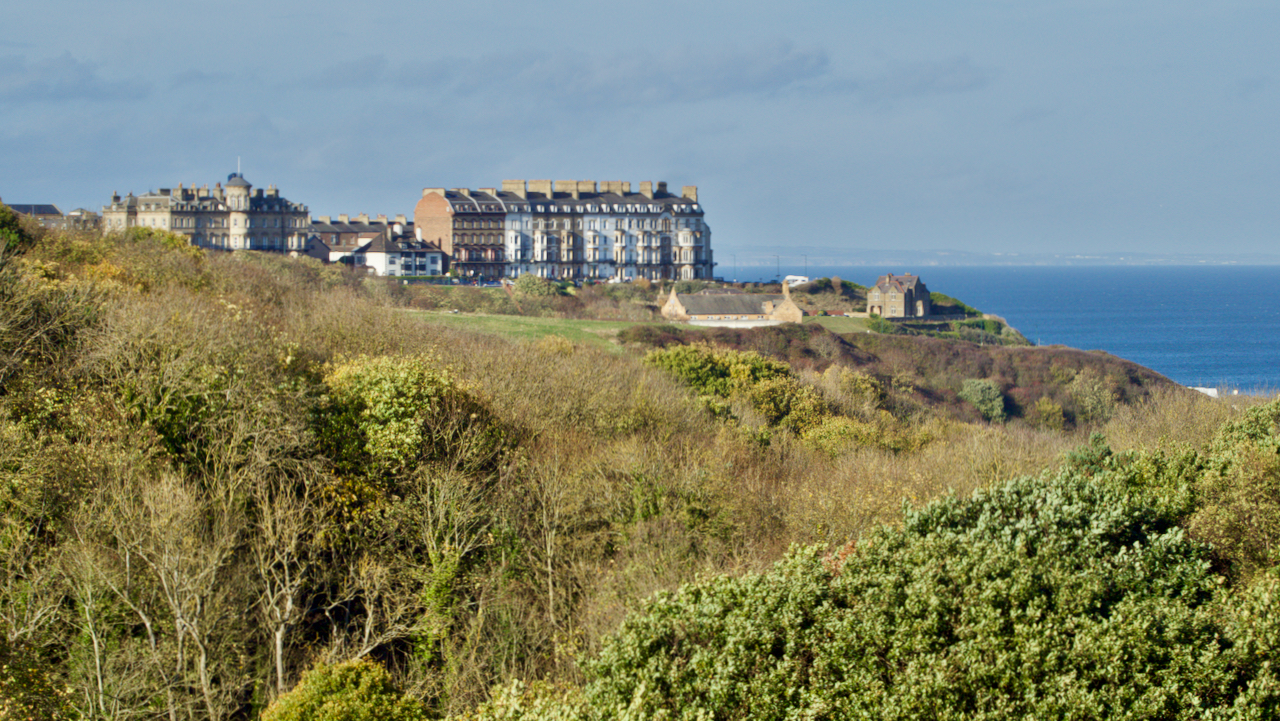 In spite of occupying the prime spot overlooking Saltburn Sands, Britannia Terrace is architectually dominated by Henry Pease’s Zetland Hotel, described in 1867 as “one of the most magnificent and commodious Marine Edifices in the Kingdom,” commanding “a splendid Prospect of the Sea and the finest Mountain Scenery in England“1‘Zetland Hotel, Saltburn-By-The Sea. Yorkshire.’ | Newcastle Guardian and Tyne Mercury | Saturday 05 October 1867 | British Newspaper Archive’. 2022. Britishnewspaperarchive.co.uk <https://www.britishnewspaperarchive.co.uk/viewer/bl/0000366/18671005/061/0004> [accessed 8 November 2022].

I love it when I ‘discover’ a new view. I’ve ran up Saltburn Gill before, so if I’d stopped, turned around and enjoyed the view, I would have seen it before.

The tall Britannia terrace is interesting and hides some history. If walls could speak. Mapped as a hotel in 1895, it was reported in 1872 that “Lord Ernest Vane Tempest, Lady, and Hon. Charles Henry Vane Tempest” were staying at No. 2 Britannia terrace2‘Visitors at Saltburn’. | Redcar and Saltburn News | Thursday 11 April 1872 | British Newspaper Archive’. 2022. Britishnewspaperarchive.co.uk <https://www.britishnewspaperarchive.co.uk/viewer/bl/0004626/18720411/022/0004> [accessed 8 November 2022].

The “Hon. Charles Henry Vane Tempest” is almost certainly his baby son just one year old, but the term of “Lady” used is intriguing.

The happy couple moved to Scarborough, where Charles was born, but apparently there were newspaper reports — which I haven’t traced — “of a relationship between Mary and a mysterious Mr Hungerford, who was described as a close friend of the Prince of Wales who later [became] Edward VII. Ernest attempted to knock his head off!” Presumably Hungerford not the Prince of Wales.

Lord Ernest Vane Tempest died in Scarborough in 1885 aged 49, however “his obituary did not mention a wife at all but she apparently lived in the Scottish borders and survived him by five years. Both are buried at Thorpe Thewles”.

He had led an interesting life. Leaving school at 18, Tempest joined the army in the ranks, but though his family connections he gained a commission as an officer in the Life Guards.

Whilst stationed at Windsor, Tempest had a romantic liaison with a young actress. Forcing his way into her dressing room, he punched the theatre manager throwing him down the stairs. Tempest was forced to resigned in disgrace, and went opal mining in Australia.

But the scandal eventually died down, and Tempest returned and joined the the 4th Dragoon Guards as a lieutenant, serving in the Crimean War.

However back in Brighton, he was involved in forcing two younger soldiers to take part in an initiation ceremony. One was found in a fountain in his nightshirt while the other, the son of a prominent clergyman, was pinned down on a sofa when Tempest cut off his whiskers.

For a second time, Tempest was drummed out of the army. The shaven soldier pressed assault charges, and Tempest went into hiding in his mother’s house to avoid the summons. He was declared an ‘outlaw’ and fled abroad, apparently without paying for some jewellery.

During the American Civil War, wouldn’t this make a good movie, Tempest ended up fighting for the Union under the name of “Colonel Stewart” in several battles on the River Potomac.

By 1868, Tempest was back in the North East trying his hand at politics. He stood as the Conservative candidate to be the first MP for Stockton, but he only polled 25 per cent of the votes — there was only one other candidate.

And what of baby Charles? He grew up to serve in the Royal Flying Corps but was shot down over France in 1917. He survived and was captured but died shortly afterwards.