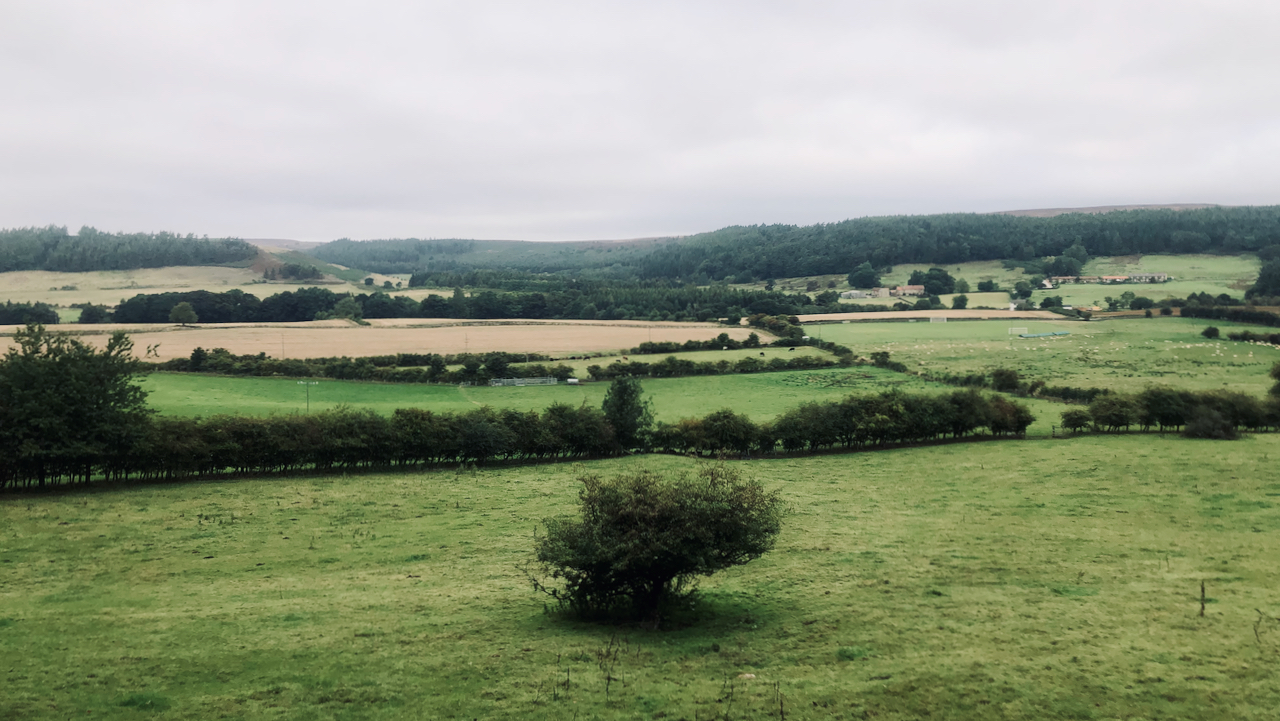 In the right distance is ‘New Row’, a terrace of six single story cottages built by the Lonsdale Mining Company in 1865-7, and added to by six 2-story houses for the Whinstone miners.

In front of New Row is the Kildale Sports Field, newly decked out for the forthcoming football season.

In the late 1970s, there was a village sports day held on that field in which a pair of local athletes made their professional debuts. In those days, racing for money was absolutely verboten, so these two runners entered under assumed names, Smith and Jones, taking turns to enter the programme of races: 100yds, 200yds, once around the field, and then twice around. Only in the final race, the cross country, involving a dash across the fields and along the skyline, did both the two runners race against each other. Winnings were in brown paper envelopes which the runners’ respective wives took charge of — enough to buy an ‘LP’ each.

Kildale Sports Field is, of course, home to the village football team.  A favourite anecdote recounted by Cedric Anthony in his book “Glimpses of Kildale History” is when Kildale played Great Broughton in the Final of the Jefferson Cup at Stokesley in 1952. “The Great Broughton team included Brian Clough and his two brothers. Brian Clough, who was known to be a very good player, was being watched by George Hardwick who was acting as Scout for Middlesbrough Football Club. To their delight, Kildale won the game by 5 goals to 2 despite Clough’s efforts for the opposition; apparently ‘he was too well marked by tough Jack Appleton.’ There was added piquancy when Clough was signed for Middlesbrough the next day, – (Frank Wilson said he was signed for £10 and an oval football!) – and extra satisfaction as they watched Clough’s progress up the League as a prolific goal scorer for Middlesbrough. He was sold to Sunderland for £55,000, a huge sum in those days, and went on to win two England caps and then moved into management at Hartlepool, Derby, Brighton, Leeds and Nottingham Forest. It is said that Clough was ‘the best Manager England never had’.“1Anthony, Cedric. “Glimpses of Kildale History”. Page 516. Geni Printing. 2012.