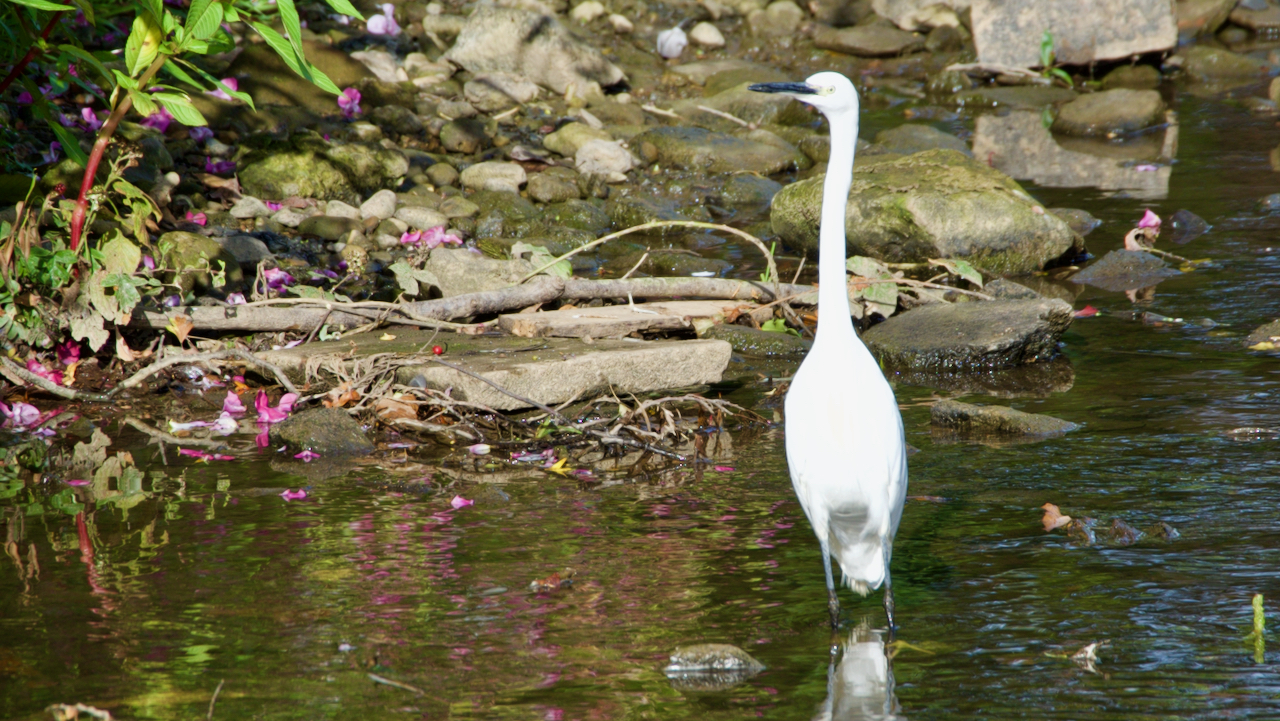 Small and elegant with its brilliant white plumage, this attractive bird has been hanging around the village for several years with reports in Guisborough and Stokesley — but is the same bird?

My RSPB 2002 book says Little egrets (Egretta garzetta) are resident in southern Britain and move south for the winter — is this an example of a changing climate?

Little egrets were once so numerous that in the 15th-century, the banquet to celebrate the enthronement of George Neville as Archbishop of York included 1,000 of them (among numerous other birds). They were listed in the coronation feast of King Henry VI in 1429. But by the mid-16th century, they were becoming scarcer for William Gowreley, “yeoman purveyor to the Kinges mowthe“, “had to send further south” for egrets1Wikipedia Contributors. 2022. ‘Little Egret’, Wikipedia (Wikimedia Foundation) <https://en.wikipedia.org/wiki/Little_egret#cite_ref-Stubbs_12-0> [accessed 23 August 2022].

In the 17th-century, bird feathers began to be in demand for decorating hats, especially the long filiform tufts of the Little egret. They had long been esteemed among the peoples of Asia as ornaments for their turbans or head-dresses. An egret was sent by the Sultan to Nelson after the Battle of the Nile, and was said to be much valued by him2KIRKE SWANN, H. ‘A dictionary of English and folk-names of British birds; with their history, meaning, and first usage, and the folk-lore, weather-lore, legends, etc., relating to the more familiar species.’ Page 145. WETHERBY & CO. 1913..

But it was Victorian fashion that really accelerated the decline of the Little egret in England, with the ladys’ large hats decorated with elaborate creations of silk flowers, ribbons, and exotic plumes including entire stuffed birds3Wikipedia Contributors. 2022. ‘Little Egret’, Wikipedia (Wikimedia Foundation) <https://en.wikipedia.org/wiki/Little_egret#cite_ref-Haines_15-1> [accessed 23 August 2022]. Perhaps this is how the Little egret acquired its colloquial name of the ‘Batty bird’4KIRKE SWANN, H. ‘A dictionary of English and folk-names of British birds; with their history, meaning, and first usage, and the folk-lore, weather-lore, legends, etc., relating to the more familiar species.’ Page 14. WETHERBY & CO. 1913.?

The craze continued, in 1887 one London dealer sold 2 million egret skins and Egret farms were established where the birds were plucked without being killed, but even so most of the most valuable Egret tuft feathers were obtained by hunting5Wikipedia Contributors. 2022. ‘Little Egret’, Wikipedia (Wikimedia Foundation) <https://en.wikipedia.org/wiki/Little_egret#cite_ref-Haines_15-1> [accessed 23 August 2022].

SOCIETY FOR THE PROTECTION OF BIRDS.
To the Editor of the Yorkshire Herald.

Sir, — May I be permitted through the medium of your columns to call attention to the Society for the Protection of Birds, which was established two years ago to prevent the enormous slaughter of birds that takes place at the dictates of a cruel and remorseless fashion ? There is no subscription to belong to the Society ; all that is required of members is that they shall refrain from wearing the feathers of any bird not killed for food, except the ostrich. When we think that many species of birds are becoming rarer and rarer, and it is feared they will become altogether extinct ; that to keep the feathers of some small birds in better condition they are killed by being put into a cool oven, which is heated till they are dead ; that the egret is only killed for the sake of the small tuft of feathers (called osprey) which it bears at breeding time, — then, surely, it is not asking too much of your lady readers if they will at once join the S.P.B. I shall be most happy to receive the name and address of intending members, and to give any further information. — Faithfully yours,

I don’t understand though why the ostrich should be exempt.

In 1904, the ‘Society for the Protection of Birds‘ gained its Royal Charter to become the RSPB, and the trade was soon brought to an end.