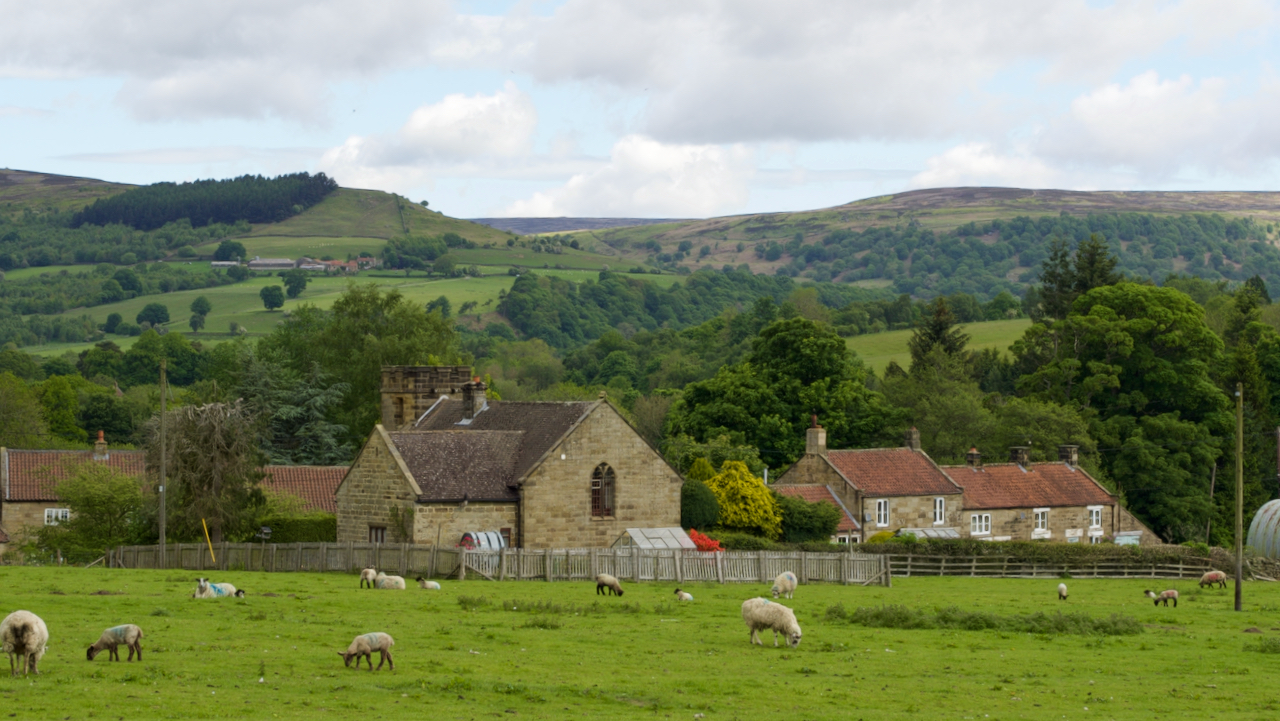 I find it frustrating photographing villages, there are always cars parked along the lanes and many interesting buildings have undergone conversion into residential.

Take for example the methodist chapel at Fangdale Beck, half way down Bilsdale. Built in 1927, last used in 1984, and since converted1Local History Articles. [online] Bilsdale.org.uk. Available at: http://www.bilsdale.org.uk/history/article/49/ [Accessed 28 May 2022].. To me, it is a rather unusual methodist chapel as it has a tower.

Fangdale Beck is the southernmost of a number of hamlets in upper Bilsdale, others being Chop Gate, Seave Green, Town Green, and Urra. It is referred to in an early-13th-century document although the earliest buildings existing today date to the 18th-century2North York Moors Historic Envoronment Record No. 5960..

It previously had boasted a post office and a forge, both also now private dwellings.

The Old Forge a Listed Grade II Building and was built about 18233North York Moors Historic Envoronment Record No. 15439.. It was founded by John Wood who died, aged 83, in 19374Britishnewspaperarchive.co.uk. (2022). MR. JOHN WOOD Death of Bilsdale Hunt Treasurer | Leeds Mercury | Monday 02 August 1937 | British Newspaper Archive. [online] Available at: https://www.britishnewspaperarchive.co.uk/viewer/bl/0000748/19370802/134/0005 [Accessed 28 May 2022].. I suspect the building originally started life as a mill. John’s father, William Wood was a miller and moved his family to Fangdale Beck in the 1840s. Several buildings of the complex have been demolished, including the 10 foot high furnace.

When John was 17, he left home after falling out with his father, and headed to Manchester, There he learnt the latest techniques in water power. On his return to Fangdale Beck, he constructed an overshot waterwheel, which is more efficient than the usual undershot, and later invented the gearing necessary for his forge to be supplemented by a horse gin went the water supply was low5Hartley, Marie and Joan Ingilby. “Life and Tradition on The Moorlands of North-East Yorkshire”. Pages 32-34. J.M. Dent & Son. 1972 ISBN 1 870071 54 9..

In 1874, John made his first cast-iron plough. Later, Middlesbrough Pig-iron was transported from Ingleby Greenhow and heated with coke to produce a more durable material. His ‘Wood Plough‘ would become much respected amongst the dales. Ploughs were made to suit the intended purpose and soil type, each named after Bilsdale men. Their initials were cast on the mouldboard. Thus a William Noble (WN) was a digging plough, and a William Barr (WB), for thin ploughing6Ibid..

In 1911, John Wood moved his business to Driffield as John Wood and Sons, agricultural engineers, although he continued to live in Fangdale Beck7Ibid..