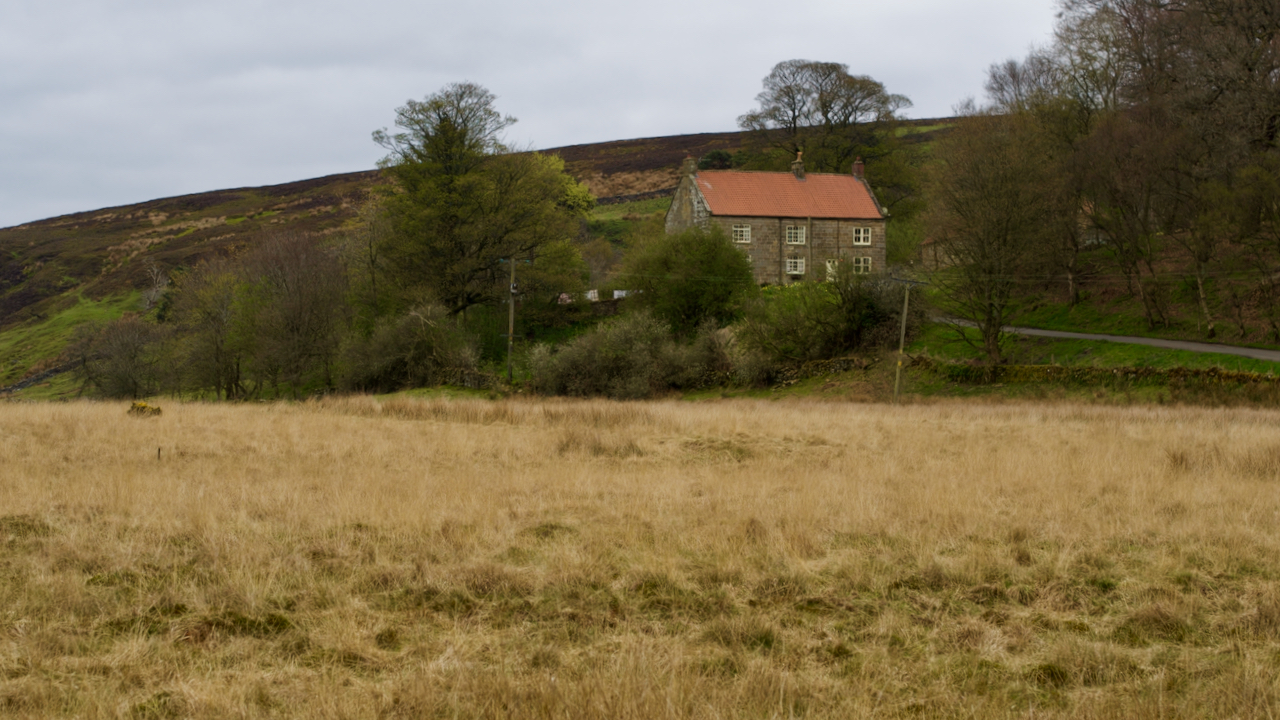 West House Farm, at the foot of the climb up Kempswithin on the Westerdale road. Seen here across Peat Carr, the boggy watershed between Kildale and Commondale.

The farm was listed as part of Kildale Estate when it was sold by Sir Charles Turner in 1806. Then, it was occupied John Rigg who paid a rent of £110 for the 285 acre (and 24 perches) farm.

In 1871, Matthew Ackroyd farmed there. Sometime towards the end of August in that year, he gave work to an intinerent labourer by the name of Samuel Edmunds. A decision which was to have dire consequences. I’ll quote the report in the Leeds Mercury for all it gory details1Murder At Kildale, In Cleveland. | Leeds Mercury | Tuesday 22 August 1871 | British Newspaper Archive. [online] Available at: https://www.britishnewspaperarchive.co.uk/viewer/bl/0000076/18710822/023/0006 [Accessed 28 Apr. 2022].:—

A shocking murder was committed on Wednesday evening last, at Kildale, about six miles from Stokesley, in the North Riding of Yorkshire, by a man named Samuel Edmunds, a navvy, and a native of Enville, in Stafford-shire. The victim was Francis Wilkinson, aged forty-six years, who was residing at New-row, Kildale. It appears that on the morning of the murder, the prisoner, who was a stranger in the district, went to Mr. Matthew Ackroyd’s farm, at West House, Kildale, in search of employment, and was engaged by Mr. Ackroyd to work on the farm. After he had done work in the evening he washed himself and took his supper, and sat talking in the kitchen until near nine o clock, when Mr. Ackroyd went with him to a barn a short distance from the house, for some straw for a bed for the prisoner, there not being accommodation for him in the house. They brought some straw to a granary above the stable, near the house, and the prisoner made his bed, and said it would do very well, Mr. Ackroyd bade him good night, and left him about half-past nine. Edmunds was then undressing, and appeared all right. About half an hour after Mr. Ackroyd went to his garden, to look at some beehives, when he heard some one shouting. He went into the house and fastened the door, and told his wife that the man in the granary was shouting, and appeared to have the horrors, He called up his servant, John Wilkinson, and in a few minutes Edmunds came to the front door quite naked, and said he would be in and kill the master; he had a heavy breaking bridle bit in his hand, and commenced smashing the windows and door. John Wilkinson went out at the back door, and proceeded to the New-row, about a mile distant, for assistance. He called upon the deceased and a man named Williamson; and another man, named John Milburn, hearing the noise, got up and dressed himself. The deceased and Milburn being the first ready, set off in the direction of West House, along the railway. When they got to a bridge near to the farm, they heard Edmunds upon the bridge shouting. They went up the embankment, and Edmunds was standing with a large oak stick, about five feet long and three inches thick, in his hand, He said he would kill the first man that came near him, and said ” Will you take a man upon the highway? ” Milburn said to the deceased they had better not go to him themselves, when deceased replied something must be done, and at the same time attempted to get over the rails on to the road, when the man made a run at him and struck him a violent blow across the bead with the stick. Deceased fell backwards insensible. Edmunds said to Milburn ” I will not kill you. ” He then went to the deceased, looked at him, and ran towards Mr. Achroyd’s farm, saying he would come back directly. At that time Williamson and John Wilkinson came up to the bridge, and Williamson seeing what had happened went off for more assistance. Edmunds was eventually secured after a very severe struggle at Kildale village, about two miles from tho scene of the murder, and brought in a cart to the lock-up at Stokesley, where he had to be strapped down. The deceased was removed to a cottage close by, shortly after being injured, and Dr. Alexander was sent for and dressed the wound. The deceased remained insensible to the time of his death, at about four o’clock p m. the next day. An inquest was held on view of the body before Mr. J, C. Sowerby, Coroner, at Kildale, on Saturday morning, when a verdict of ”Wilful murder” was returned against the man Samuel Edmunds. The prisoner has worked at the ironstone mines for the last four months at Guisbro’, and had been drinking for above a week previous to going to Mr. Ackroyds. He is a discharged soldier, and is branded with the letters D. and B. C.