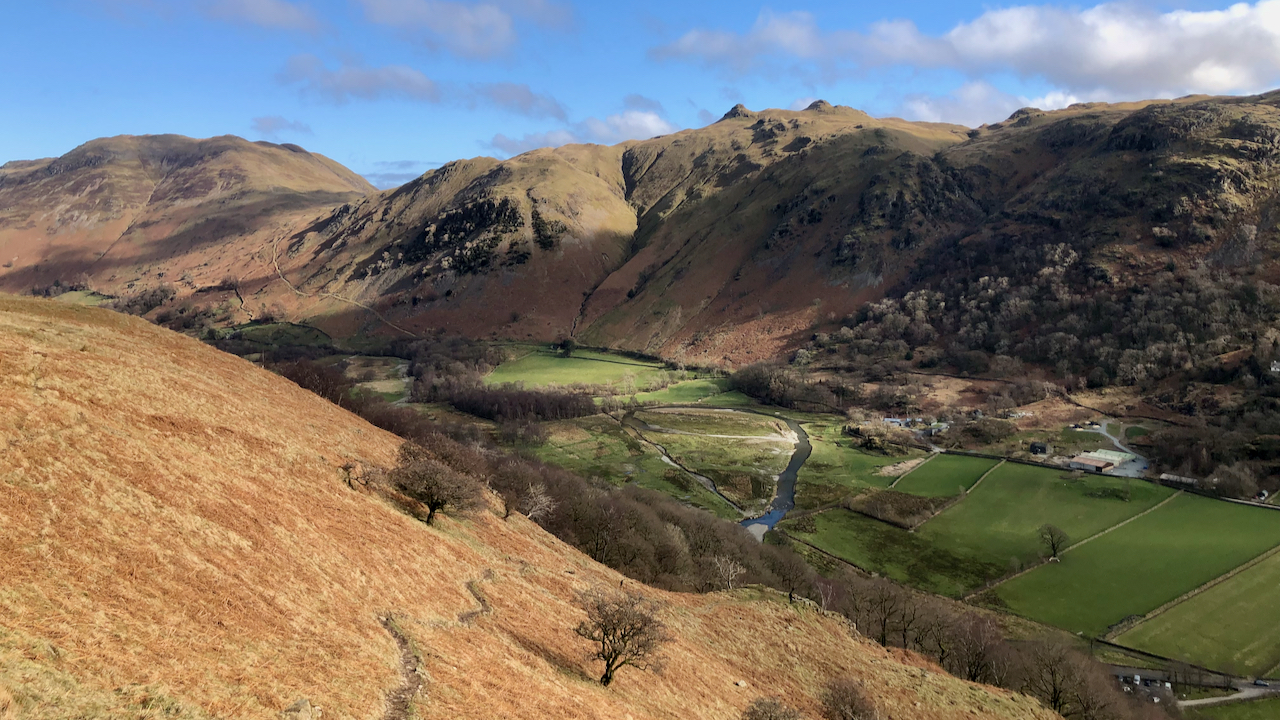 The principle “river” in Patterdale between Ullswater and Brotherswater is Goldrill Beck. That’s it there, just right of centre and to the left of the “holiday village” of Hartsop Fold

But compare it to the map, which shows the beck hugging the road, hidden by the trees of low Wood.

In the late 18th-century, the beck was canalised, made straighter between embankments in an attempt to drain the fields and make them more productive.

The beck became fast flowing with uniform depth and a lack of natural features made them a poor wildlife habitat. And the high embankments actually prevented the fields from draining  into the beck and so became boggy and reed-filled.

This was done in many of the valleys of the Lake District, but Goldrill Beck also had a particular issue for Goldrill Beck as its canalised route alongside the A592 caused it to continually undercut the road. This was particularly bad during Storm Desmond

The National Trust, in conjunction with the Environment Agency, Natural England and Cumbria County Council have undertaken a project to restore Goldrill Beck to a more natural course with features such as gravel bars, riffles, and meanders1National Trust. (2022). We’re taking action to restore Ullswater’s rivers. By reconnecting them with the land around them we will impr. [online] Available at: https://www.nationaltrust.org.uk/aira-force-and-ullswater/projects/restoring-ullswaters-rivers [Accessed 6 Mar. 2022].. The parlance is to re-wiggle the rivers although in the case of Goldrill Beck it seems to be one big loop but at the lower end of the loop the beck is split into multiple channels where it joins Angletarn Beck.

The old river channel has been partially filled so that it may act as an overflow pond at times of high rainfall.

Ahead, on skyline, are the twin summits of Angletarn Pikes. To the left the deep gash of Dubhow Beck with the cottage of Dubhow and its foot

It’s just occurred to me that the online mapping below will eventually be updated to show the new river system, so for posterity here is a link to the 1920 O.S. Map.