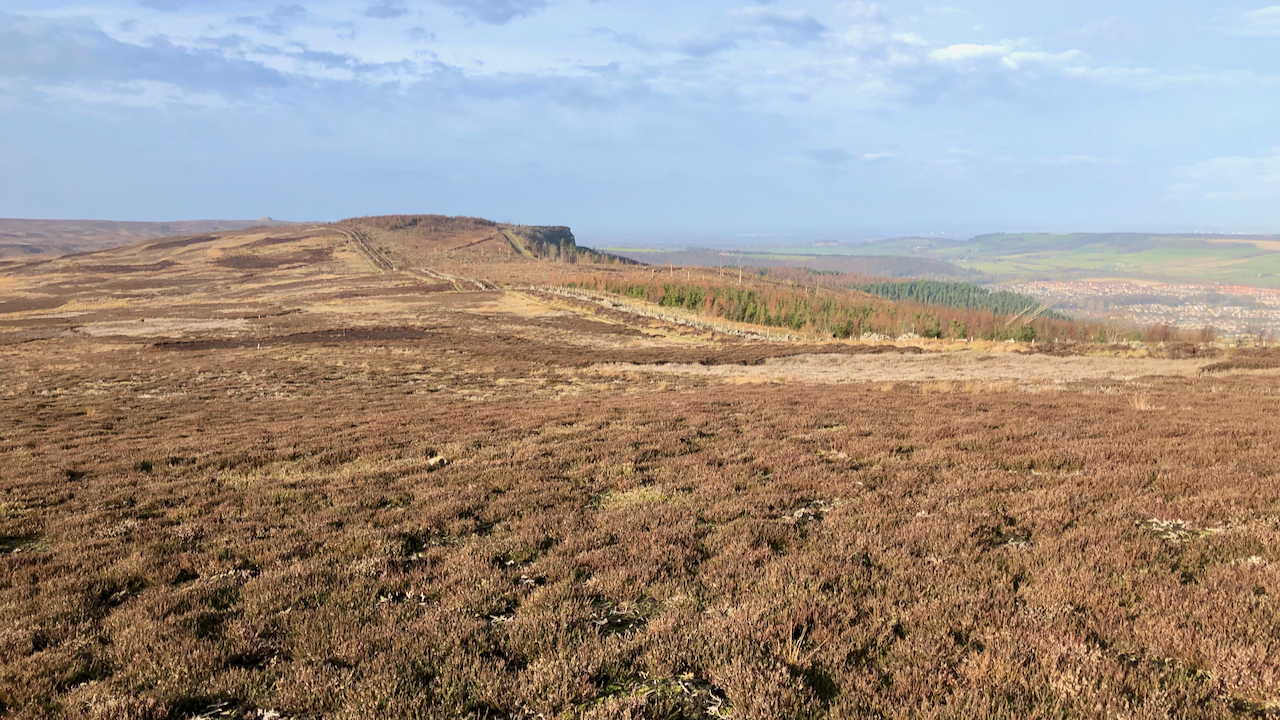 descending diagonally from the nab to the col of Highcliffe Gate.

First thing when I got in was to have a look at the Lidar mapping, courtesy of the National Library of Scotland:

Curiouser and curiouser, as Alice said.

The North York Moors Historic Environmental Records Map indicates an  earthbank in that location surrounded by a field system, both dated to the Iron Age 1NYM HER Nos: 14282/14379..

I was aware that flint tools and an hearth dating back to the Mesolithic have been found on Highcliff Nab, but Iron Age — I had no idea2NYM HER No: 15247..

The trouble is the actual records are not available online, so further research was frustrated.

John Walker Ord, the 19th-century topographer and historian, was aware of an embankment on Highcliffe Nab. Born in Guisborough, he wrote of “a well-defined and very complete ancient encampment, never described by any previous historian“3Ord, John Walker. “The History and Antiquities of Cleveland: Comprising the Wapentake of East and West Langbargh, North Riding, County York.” 1846. Page 122. Available online at https://books.google.co.uk/books?id=qPsnAAAAYAAJ&dq=ord&pg=PA122#v=onepage&q=highcliffe&f=false.

He further tells of “a strong well defined rampart and ditch extend[ing] from the eastern extremity and flank[ing] the northern declivity of hills extending nearly a mile in an uninterrupted line to the stone quarry near the old Alum Rock in Belman Bank“. A boundary bank is indeed recorded on the NYM HER map

“A similar line forms an additional defence westward to the brow of Highcliffe forming a double rampart towards the vale on the north“. This is likely to be the dyke recorded below Highcliffe

Ord suggests these earthworks are contemporary with the promontory hill-fort at Eston. That may well be the case but what is clear is that the earthworks, so visible when Ord visited, have been obliterated by the 20th-century forestry undertaking.

I played around with Ord’s dimensions and came up with an area of about 5½ acres for the “encampment” he describes. Or about 3 football pitches. For comparison the 300m ring contour of Highcliffe (Potters Ridge) is 98 acres and the 310m, 39 acres. So to find Ord’s “encampment” on the Lidar map, one needs to look quite closely. The resolution is not good but there is a subtle suggestion.