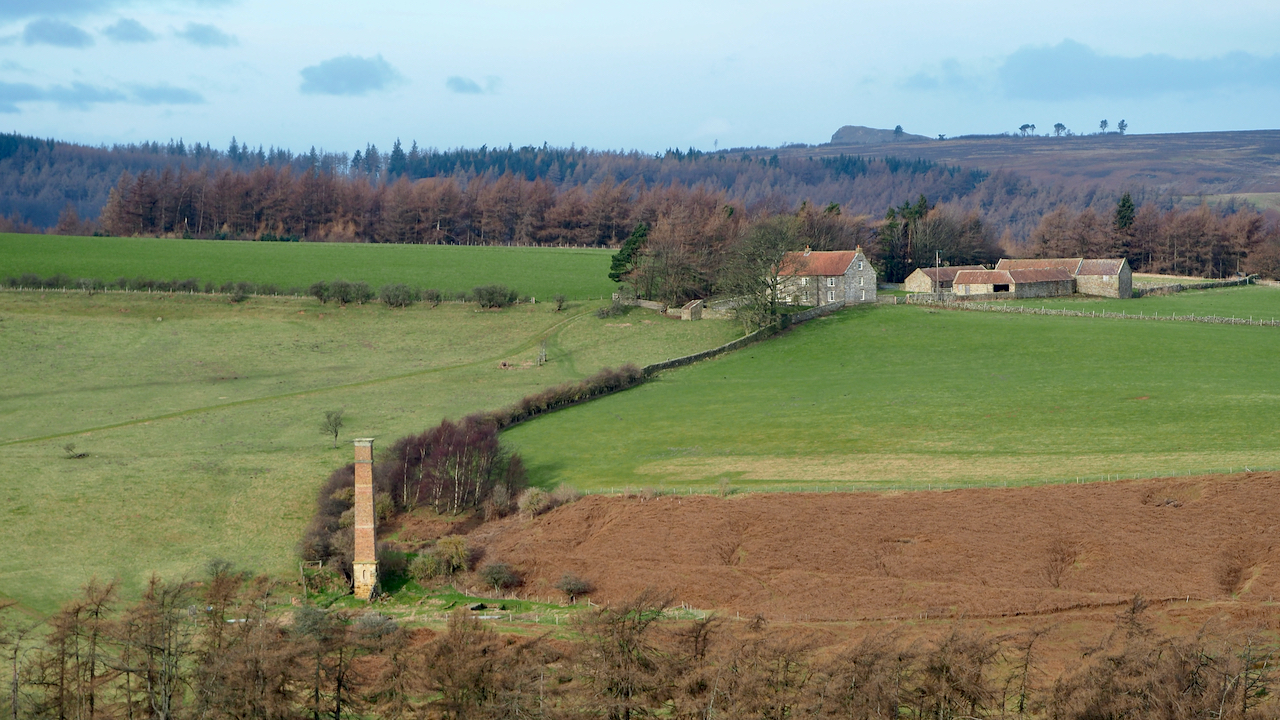 , a short lived enterprise that hoped to capitalise on the 1860s ironstone boom.

The architecture of the chimney is in contrast to the utilitarian style later in the century. No expense seemed to have been spared, with decorative polychromatic banding, and the top splayed out. All the more surprising that it would only be noticed by grouse and sheep.

But perhaps it was a condition imposed on the mining company by the landowners, the Turton Estate.

There are two reasons why a chimney would have been needed: to vent noxious fumes or to provide a draw for the steam boilers. Being in such an exposed location it’s hard to believe a lack of a draw would have been considered a problem.

On the bracken covered bank to the right of the chimney, a number of drifts can be seen. The Warren Moor Iron Company were responsible for these, which accessed the Dogger ironstone seam, but this was found not to be good enough quality. The company went into liquidation.

The Main seam is generally about 200′ (61m) lower than the Dogger, and it is this seam that, four years later in 1872, the Leven Vale Iron Company tried to exploit by sinking shafts necessitating building the chimney. It is thought the mine was abandoned before reaching the seam1“Cleveland Ironstone – a memorial to John Owen, presenting some of his researches into the ironstone mining history of Cleveland and other related topics”. Published jointly by the Cleveland Industrial Archaeology Society and North York Moors National Park Authority. 1998. ISBN: 0 907480 77 2..

As the chimney is just over 64′ (19m) high, it gives a visual indication of the depth of the shafts needed.

Incidentally, clearly visible this side of Warren Farm

, at the top of the hill, is a Grade II listed privy, contemporary with the house itself, late 18th-century 2Heritagegateway.org.uk. (2018). PRIVY APPROXIMATELY 20 METRES TO SOUTH OF WARREN FARMHOUSE. List Entry Number: 1151360 [online] Available at: https://www.heritagegateway.org.uk/Gateway/Results_Single.aspx?uid=1151360&resourceID=5 [Accessed 4 Feb. 2022]..