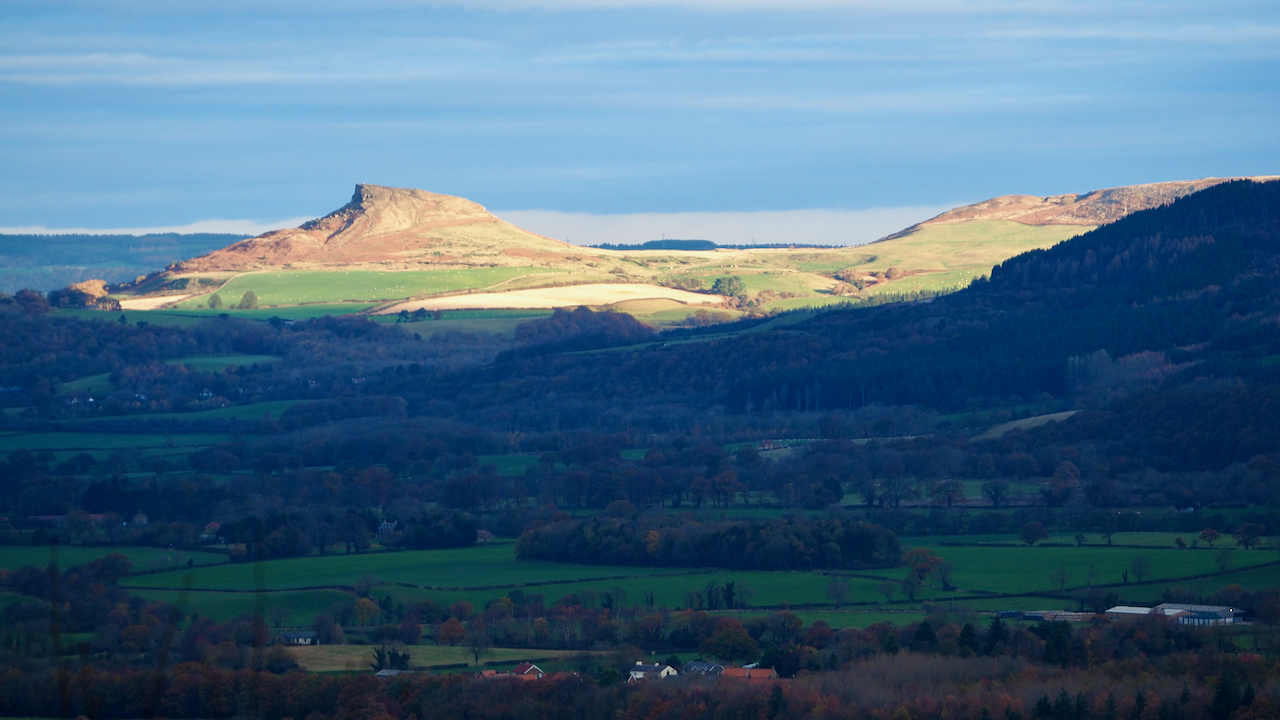 It seems a bit of a waste. Posting a distant photo of my local hill.

I had planned a wander over Urra Moor. A dull start but I could see this patch of sunlight slowly making its way over the Eston Hills. I figured sooner or later it would shine on Roseberry. I wasn’t disappointed. Odin’s Berg with the fields of Aireyholme Farm became brilliantly spotlighted.

I mentioned the other day that Aireyholme was once the common land for Great Ayton parish and was enclosed in 1658, but the etymology of the name suggests a much older usage.

Aireyholme is named as ‘Ergun‘ in the Domesday book, and derives from the Old Irish element ‘Airgh‘ indicating an upland pasture or a shieling used in the summer1Morris, R.W. “Yorkshire through Place Names”. Page 139. David & Charles. 1982. ISBN 0-7153-8230-6.. This is suggestive of Scandinavian settlers coming from across the Irish sea, first to Cumbria, then over the Pennines into Yorkshire2Ibid. Page 141., probably in around the early 10th century3“Historical Atlas of North Yorkshire.” Edited by Robin A Butlin. Page 69. Westbury Publishing. Reprinted 2004. ISBN 1 84103 023 6..

This is the current thinking, but one Victorian antiquarian believed ‘Ergum‘ meant the site of an open-air place of sacrifice4“Notes about Great Ayton in Cleveland”. Collected by Rev . C.V. Collier 1896. Referenced by Pearce, I. (2012). “Published books on Great Ayton and Roseberry Topping”. Available online at: http://greatayton.wdfiles.com/local–files/books-on-cleveland/Published-Books-on-Great-Ayton.pdf..

If we assume the upland pasture origin of the name, it begs two questions: when and where. When was this farming method used and where did the cattle come from.

The etymology suggests that those Irish-Norse settlers were using Aireyholme for summer pasturing. Perhaps they merely continued a tradition dating from pre-history.

The seasonal movement of cattle or other animals is termed transhumance and the temptation is to assume stock was moved up from Aton, the farm by the river, during the summer months. But moving cattle to lusher pastures can be over much longer distances. There are ‘drove’ roads linking  permanent settlements in Kent to their summer pastures on the Sussex Weald5Transhumance. Papers from the International Association of Landscape Archaeology Conference, Newcastle upon Tyne, 2018.Edited by Mark Bowden and Pete Herring. Page 12. Archaeopress Publishing Ltd. 2021. ISBN 978-1-80327-128-6..

By contrast transhumant movement can also involve relatively small numbers of animals over short distances, with animals moving to higher pastures in spring or early summer. This may be related to cultivation — freeing up the lower pastures for the growing of crops7Ibid. Page 6..

Cattle may also be moved over relatively long distances where a jarl or lord has scattered holdings and allows his peasants to move their stock from one of his manors to another for similar reasons8Ibid. Page 6..

For what type of summer pasturing Aireyholme was used for is open to speculation.