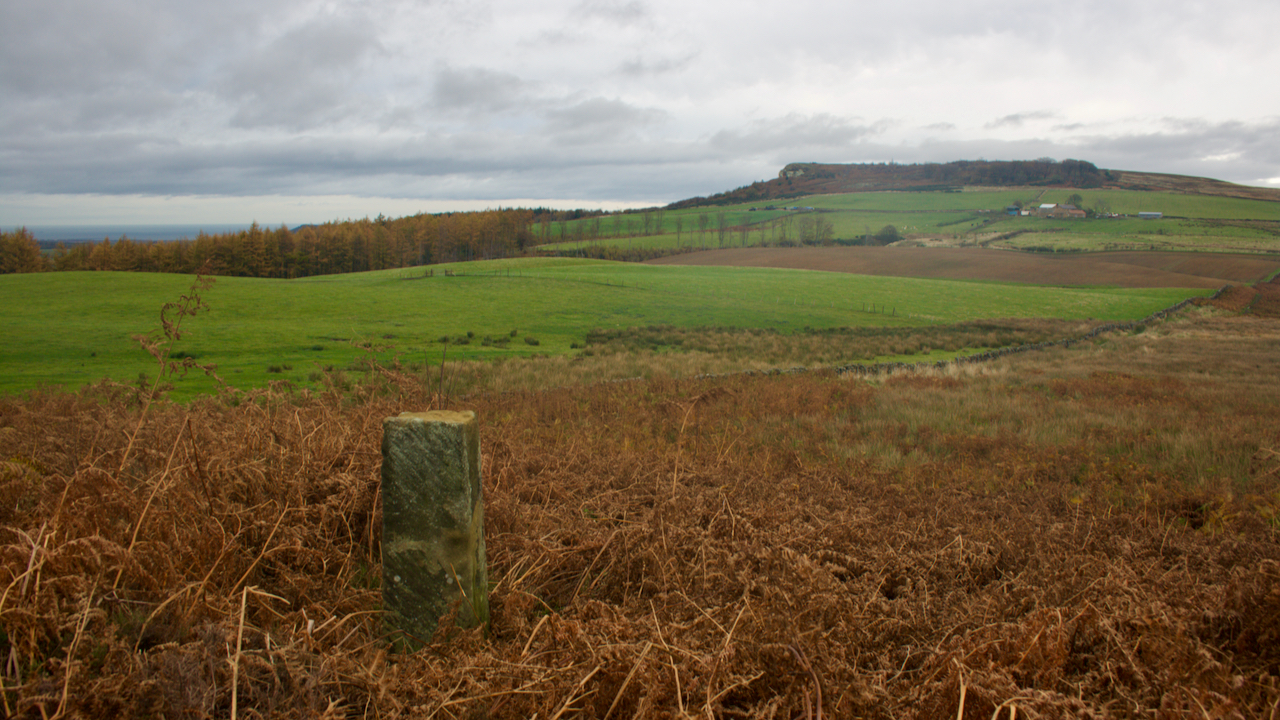 A view of Highcliff Nab across Bold Venture Gill. This boundary stone is one of a line of marking the former boundary of Guisborough and Hutton Lowcross boundary. It is inscribed ‘T.C. G. 1860’; standing for Thomas Chaloner and Guisborough. But it is his father, Robert Chaloner, I want to write about today.

I have posted about Robert Chaloner before. Born 1776, MP, Lord Mayor of York, Justice of the Peace, Deputy Lieutenant for Yorkshire, director in the Stockton and Darlington Railway Company and a senior partner in a York banking house. Altogether an illustrious career until his bank went pear shaped and he found himself bankrupt. But that was in 1825, I want to concentrate today on his activities five years earlier.

Like many other influential North Riding families, Chaloner was a Whig, a faction which supported the abolition of slavery and other moral reforms1Wikipedia Contributors (2021). Whigs (British political party). [online] Wikipedia. Available at: https://en.wikipedia.org/wiki/Whigs_(British_political_party)#Return_to_power [Accessed 6 Nov. 2021].. He called repeatedly for Catholic emancipation and parliamentary reform and attacked the Tory Government for pursuing repressive policies that ‘infringed the liberties of the people’2Malcolm Chase (2015) CAROLINE FEVER, ROBERT CHALONER AND THE NORTH RIDING WHIGS, Page 22, Northern History, 52:1, 85-100, DOI: 10.1179/0078172X14Z.00000000079.. Yet Chaloner would receive compensation from the abolition of slavery and, after his bankruptcy, was a prime mover in Irish land clearances and the forced emigration of ‘surplus’ peasant families3Ucl.ac.uk. (2012). Summary of Individual | Legacies of British Slavery. [online] Available at: https://www.ucl.ac.uk/lbs/person/view/45212 [Accessed 6 Nov. 2021]..

The reason why I’m relating this today, 6th November, is that because in 1820 Guisborough celebrated Guy Fawkes night by parading and eventually burning a ‘green bag’, an icon of the Tory government,  in support of Queen Caroline, the estranged wife of George IV, after the King demanded a divorce in an attempt to block her from taking her place beside him as Queen Consort. A charge of adultery was concocted and a trial arranged. The public was incensed and by September, there were weekly protests in London, 50,000 strong and carrying anti-government banners4The History of Parliament. (2020). The royal scandal that helped change British politics: the 1820 Queen Caroline affair. [online] Available at: https://thehistoryofparliament.wordpress.com/2020/06/17/the-royal-scandal-that-helped-change-british-politics-the-1820-queen-caroline-affair/ [Accessed 6 Nov. 2021]..

I have also written about this Guisborough parade before. Not much happened in Guisborough without Robert Chaloner’s knowledge and acquiescence; he owned over 90% of the land in the parish5Malcolm Chase (2015) CAROLINE FEVER, ROBERT CHALONER AND THE NORTH RIDING WHIGS, Page 14, Northern History, 52:1, 85-100, DOI: 10.1179/0078172X14Z.00000000079.. The windows of his hall in Guisborough was brightly illuminated. There is no doubt he knew what was going on.

Subsequent parades and demonstrations followed throughout the country and continued after the Queen’s trial for adultery was dropped on the 9th November6Ibid. Page 5.. A classic U-turn. Guisborough had captured the nation’s attention and many towns and villages copied their idea of symbolically burning the ‘green bag’.

Because of the demonstrators’ expressed allegiance to the Queen of the realm, it was thought they fell outside the repressive legislation introduced in the wake of the Peterloo Massacre in Manchester the year previously7Ibid. Page 11.. And besides many magistrates were sympathetic; Chaloner himself was a JP.

The radical populace continued to take every opportunity to to insult and revile the Tory Government and by implication the King himself. This eventually alienated the political nation and by associating themselves to the radicals, resulted in the exclusion of the Whigs from power at Westminster for the rest of the decade8Ibid. Page 27..