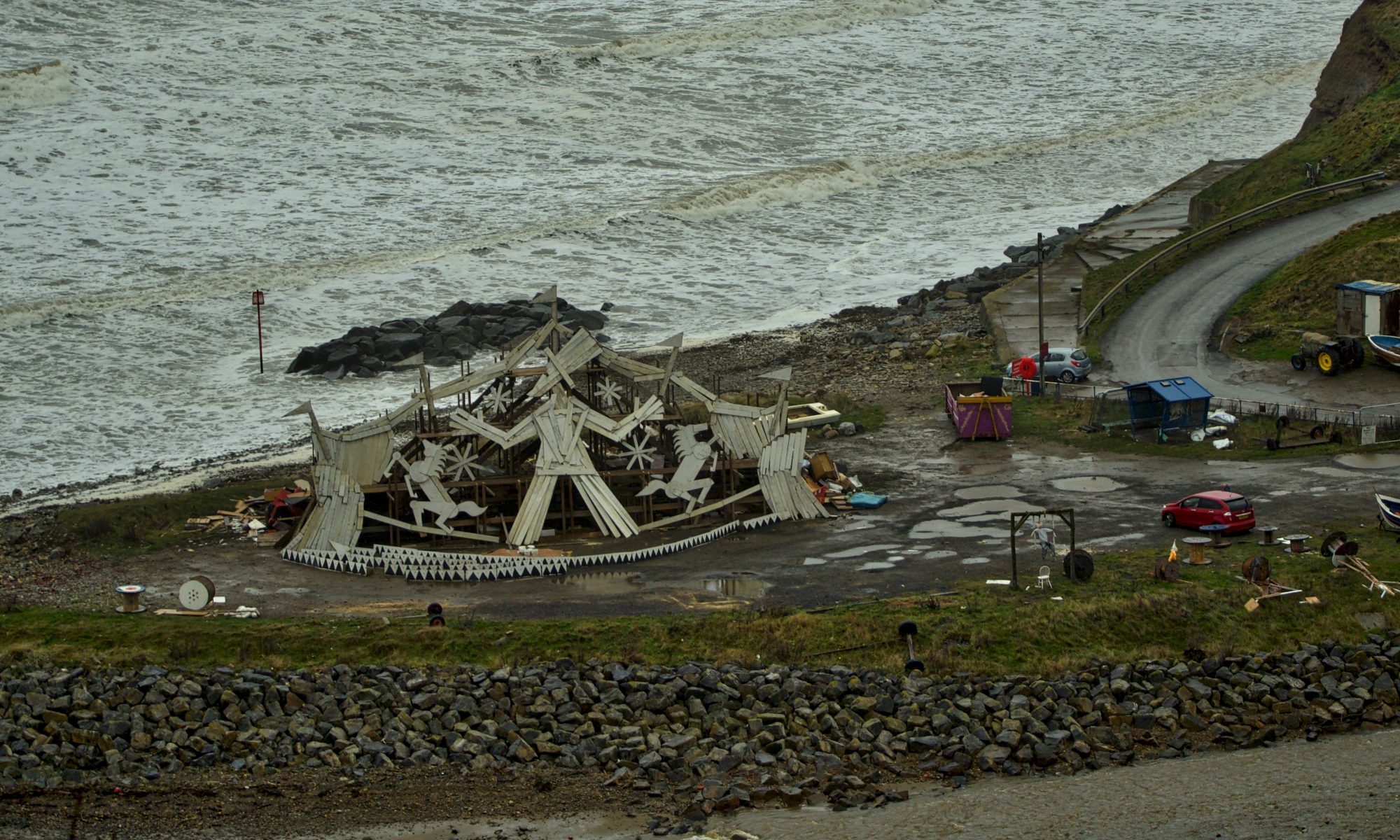 With a theme of “Skinningrove’s Greatest Showman”, the final touches are being made to Skinningrove’s enormous bonfire. A tribute to a 19th-century local miner, Henry Cooper, “The Yorkshire Giant – Tallest Man in the World”, who travelled across America with P. T. Barnum’s Travelling Show. At eight and a half feet tall, Cooper was actually born in Scugdale and worked at East Skelton so his link to Skinningrove is somewhat tenuous, to say the least.

Nevertheless, it’s a modern theme, Guy Fawkes is becoming a forgotten villain. Soon after his attempt to blow up Parliament in 1605 a public day of thanksgiving was created by an Act of Parliament (which wasn’t repealed until 1859), and enthusiastically adopted by the Puritans preaching anti-Catholic sentiment. On Guy Fawkes Night 1820 Guisborough was the scene of a radical protest which was reported around the country from Bristol to Edinburgh and in The Times and exuberantly copied during a period of celebration in support of Queen Caroline.

A quote from the York Herald & General Advertiser, 11 November 1820:
Sunday last being the 5th of November, the usual political ceremonies of that day were postponed till Monday; when notice as given to the inhabitants of Guisborough and its neighbourhood, that a large fire would be made in the evening, in the Market-Place, and that a Green Bag, ‘filled with rubbish and combustibles,’ would then be committed to the flames. This mode of expressing public detestation of the Green Bag system of Ministerial notoriety, was accordingly carried into effect, between eight and nine o’clock. A large fire was made, and the PEOPLE being assembled, there was a numerous procession, preceded by persons with lighted flambeaux – a large GREEN BAG, inscribed on one side ‘Perjury and Conspiracy,’ and on the other ‘Pains and Penalties,’ was carried at the top of a long Fork, by a veteran of Waterloo – and the Band of Music, belonging to the third North York Militia enlivened the numerous concourse by martial music. In this manner they paraded the streets, and on their return to the Market-Place, the Bag was formally set on fire and burnt to atoms – the Band playing the national tune of ‘Rule Britannia,’ and the People to the amount of several hundreds, hailing the destruction of the Bag and its contents by loud and continued cheers.

It was a protest on the face of it in support of Queen Caroline, the Royal Consort but in reality, it was a cumulation of grievances against the King and his Tory Government. According to parliamentary custom at the time, all papers from the King’s government were sent to the Lords in a green felt bag, hence its significance in the report.

The year before, 1819, the Peterloo Massacre had taken place in Manchester followed by oppressive legislation severely limiting free speech and the right to gather for peaceful demonstration. Then followed a year of extensive popular unrest in London and the North of England. In January, the ostentatious George IV ascended to the throne and quickly demanded a divorce from his estranged consort, Queen Caroline, who returned to England in the summer of 1820 after living 14 years on the Continent. She was, however, a popular Queen. By July normal parliamentary business had come to a standstill as the Lords discussed a “Bill of Pains and Penalties”, the divorce bill alleging adultery by the Queen. MPs from the Commons crowded into the galleries hoping to hear some sexually explicit tittle-tattle. Outside of Parliament, the populace affirmed their support for Queen Caroline and their dislike of the government.

So the townsfolk of Guisborough chose to celebrate Guy Fawkes night by an innovative display of loyalty to the Queen. The “Bill of Pains and Penalties” was actually dropped by the Government on the 9th November but not before many other demonstrations were spontaneously organised throughout the country. But Guisborough was the first.

News of the Bill’s withdrawal, effectively acquitting the Queen, only reached Guisborough on the following Sunday. On the Monday notices were posted inviting subscriptions to a collection for a service of plate to be presented to the Queen. On Wednesday there would be a ‘general illumination’ where those who supported the Queen would display as many lamps and candles as they could afford in their windows. Lord Gisborough illuminated his seat, Gisborough Hall, while further afield fellow Whig, Lord Dundas, did the same to Marske Hall. Tory newspapers and another green bag was paraded through the town, attached to a high pole in the Market Place and “with all its horrid contents blown to smithereens by the mass discharge of fire arms”. A “large party of gentlemen” toasted ‘the health of her Majesty at a dinner at the Cock Inn. Quite an exuberant display of support for the Queen.