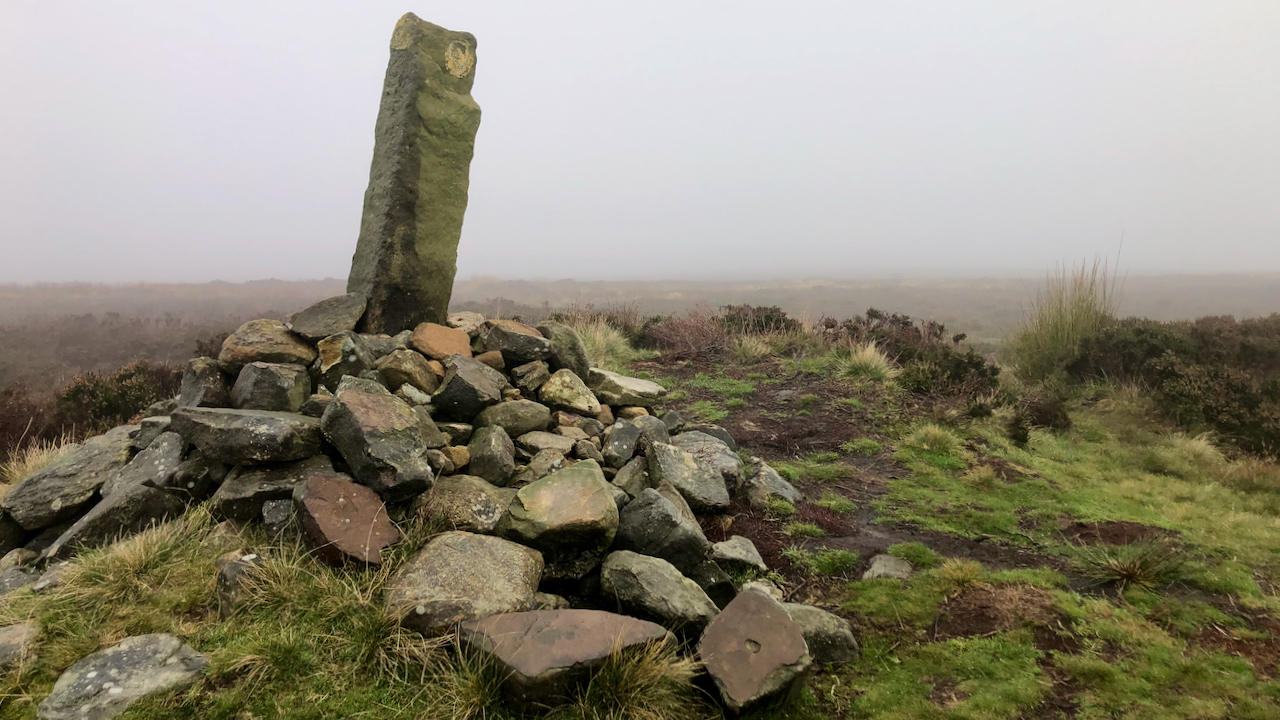 A rouky run from the Lords’ Stone Cafe to Chop Gate via Noon Hill and Cock Howe.

‘Rouky‘ — listed in a dictionary of North Country dialect words as misty, damp, or foggy1BROCKETT, JOHN TROTTER. “A GLOSSARY OF North Country Words IN USE; WITH THEIR ETYMOLOGY, AND AFFINITY TO OTHER LANGUAGES; AND OCCASIONAL NOTICES OF LOCAL CUSTOMS AND POPULAR SUPERSTITIONS”. Page 249. Newcastle upon Tyne. 1829.. I did initially type the word ‘claggy‘; for I have some recollection of hearing someone once using it to describe that familiar blanket of low cloud that often covers our hills and moors. But the same dictionary defines claggy as “sticky, unctuous, clogging by adhesion”, as in mud2Ibid. Page 87.. Ah well, some of the paths were were certainly that. There was a lot of water about.

Cock Howe is a Bronze Age round barrow 2m high, 15m in diameter, and topped with a post Medieval boundary stone. It lies just within the south-eastern end of the 400m ring contour of Noon Hill but not quite reaching the lofty high point of 404m. The mound would have been once surrounded by a ditch which has become infilled3Historicengland.org.uk. (2012). Cock Howe round barrow, Bilsdale Midcable – 1015761 | Historic England. NYM HER No: 195. [online] Available at: https://historicengland.org.uk/listing/the-list/list-entry/1015761 [Accessed 3 Nov. 2021]..

The stone marks the old boundary between Snilesworth in the parish of Hawnby, and the townships of Bilsdale Kirkdale and Bilsdale Midcable in the parish of Helmsley. These are probably coterminous with old tribal boundaries dating back to the Bronze Age.

As for the etymology of the name. ‘Howe’ is the easy bit and is Old Norse for a mound or barrow. It is tempting to think that ‘Cock‘ refers to the male domestic fowl. Indeed that could well be right. One theory is that it comes from the Old English ‘cocc‘ but which, as well as meaning a rooster, also could mean a hillock, or even just the personal name of some Anglo-Saxon chieftain. Coxhoe in Durham has the same root4University of Nottingham – Institute of Name Studies School of English (2021). Key to English Place-names. [online] Nottingham.ac.uk. Available at: http://kepn.nottingham.ac.uk/map/place/Durham/Coxhoe [Accessed 3 Nov. 2021].. Another echoic theory is that it derives from the Old Norse word for a rooster ‘kokkr‘. You pays your money …5Etymonline.com. (2021). Etymonline. [online] Available at: https://www.etymonline.com/word/cock#etymonline_v_15750 [Accessed 3 Nov. 2021].