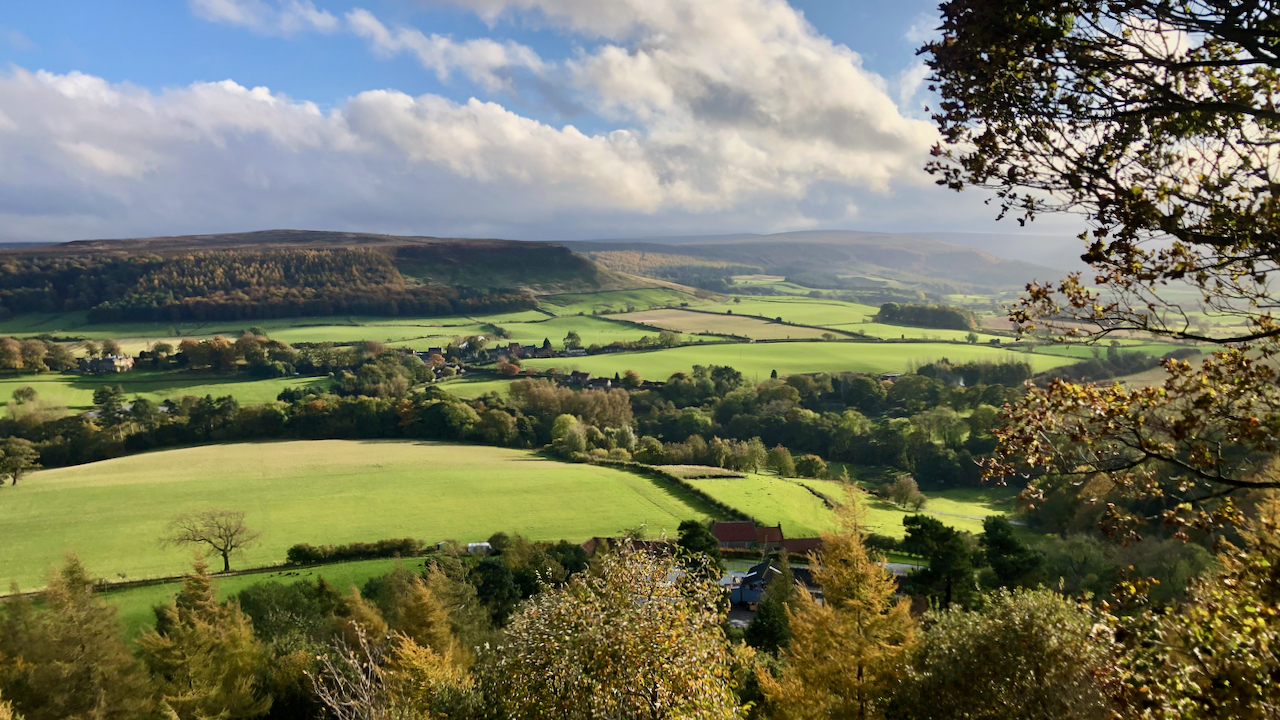 I delayed going out this morning because of the dismal weather. It was still raining when I left the house at 12:00 but by the time I crossed the River Leven at the other end of the village the sun was out.

I discovered something about Kildale the other day, although when you think about it, it’s pretty obvious. The dale was one of the places where the monks carrying St. Cuthbert’s Coffin rested while fleeing from the marauding Danes. Which must be the reason why Kildale church is dedicated to the saint.

Cuthbert died in 687, and was buried at Lindisfarne. Eleven years later his coffin was re-opened, when it was discovered that his remains showed no sign of decay. This and various miracles near to his remains led to his canonisation. He was reburied in a new coffin which remained on Lindisfarne as a shrine until 875 when, under a threat of a Viking invasion, the monks fled with it on what turned out to be a seven year journey of Northern Britain before settling at Durham1Wikipedia Contributors (2021). St Cuthbert’s coffin. [online] Wikipedia. Available at: https://en.wikipedia.org/wiki/St_Cuthbert%27s_coffin [Accessed 31 Oct. 2021]..

“In Clevelandshire, in the same Riding, they halted at Kildale, six miles east of Stokesley in a wild and mountainous part of the country; Kirk-Leatham, south of Redcar, and five miles northwest of Guisborough; Wilton, three miles and a half north west of Guisborough; Ormesby, about six miles west of Guisborough; Marton, i.e. Marshtown, six miles north of Stokesley and Middleton-upon-Leaven, four miles south east of Yarm.”2Eyre, Charles. “The History of St. Cuthbert Or, An Account of His Life, Decease, and Miracles, of the Wanderings with His Body at Intervals During CXXIV Years, of the State of His Body from His Decease Until A.D. 1542, and of the Various Monuments Erected to His Memory”. Page 105. James Burns, 1849. [online] Available at: https://books.google.co.uk/books?id=2pFQAAAAcAAJ&lpg=PA105&dq=%22pilgrimage%20of%20grace%22%20%22kildale%22&pg=PA105#v=onepage&q=%20%22kildale%22&f=false [Accessed 19 Oct. 2021].

In the photo, Kildale church is in the shade right of centre, partially hidden by trees.