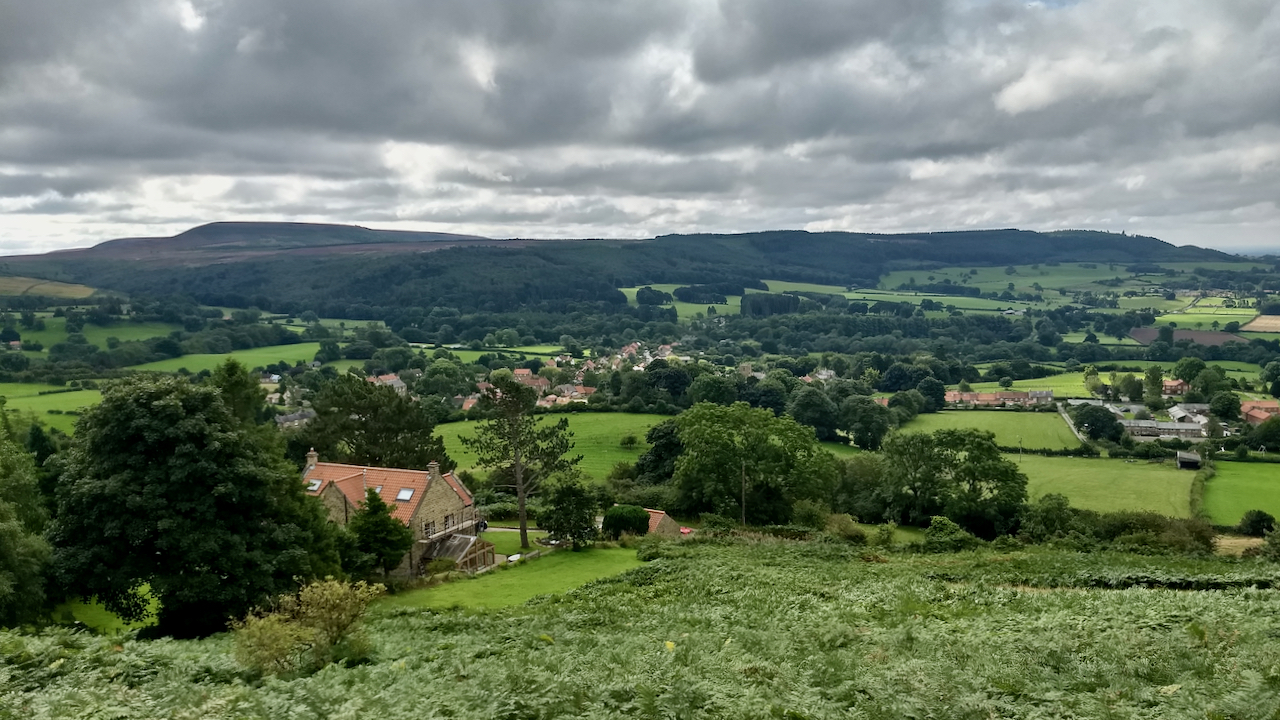 “Osmotherley is an endearing village on the fringe of the Hambletons and the Clevelands. It lies about a mile and a half to the east of the main Thirsk – Yarm road, but it is most accessible from Northallerton. The King’s Head hotel at Clack Lane End points the way to the village. It is a large village, standing on the slopes of a steep hill, with its heart around the market cross and the old stone table.

“The bald facts do little justice, however, to the charm of this attractive village. The name suggests a benevolent, motherly sort of place, full of homely stone cottages and inns, and that is exactly what Osmotherley is. The ancient church with its fine tower, and the rugged scenery around, seem entirely in character with this hill village.

“Osmotherley once had a market, and once it was well known for its handloom weaving, but both are things of the past. Its Feast used to be a famous affair, which lasted a week, but both are things of the past, with old Bob Douthwaite fiddling away around the cross, year after year, and all the inns doing a roaring trade. It is said that whisky stills used to be worked on the moors and that smugglers did a brisk business. But the village seems to have sobered down considerably since those glorious days. The thing that struck me most was the number of children playing in the street, and that is always a pleasant and healthy sign in any village.

“The Queen Catharine inn in the middle of the village and the Three Tuns over the way are pleasant looking inns. Legend has it that Catharine Parr — who came from Snape Castle — once spent a night at one of these inns. Like Elizabeth, she turns up all over the North Riding, and if she or Elizabeth slept in half the beds claimed for them, they must have led a very nomadic existence indeed.

“Osmotherley is the sort of place that invites one to linger. The main street is full of fascinating passage-ways (mostly marked private) that always tempt me sorely. But one passage at least is a public right-of-way and leads to an enchanting footpath over the fields to Slapestones and beyond.”

So wrote Alfred J. Brown in 19521“Brown, Alfred J. “Fair North Riding”. 1952 Country Life Limited.. Today’s Osmotherley seems a world away from this idyllic description. And indeed it is. The virtual motorway of the A19 has contributed to Osmotherley being transformed into a commuter village for Teesside and a tourist hotspot. Children no longer play in the street, cars now dominate the village. Staycations have exacerbated its popularity.

In describing Osmotherley as a motherly sort of place, Brown was perhaps alluding to one story of the origin of the name where Oswi, a child prince of Northumbria, drowned in a spring on Roseberry Topping. His mother, heartbroken, died soon afterwards. Both were buried side-by-side in this quiet valley between the Cleveland and the Hambleton Hills. Hence, Oswi-by-his-mother-lay.

A tall story for sure. The more scholarly thinking is that the name comes from two elements. The first is ‘Asmundr‘, a Scandinavian personal name ,and the second is from the Old English ‘leah‘, meaning a clearing. Osmotherley is recorded in the Domesday Book as ‘Asmundrelac‘. It is a not uncommon example of a hybrid place-name comprising elements of both Scandinavian and Old English2Morris, R.W. “Yorkshire through Place Names”. David & Charles. 1982. ISBN 0-7153-8230-6.