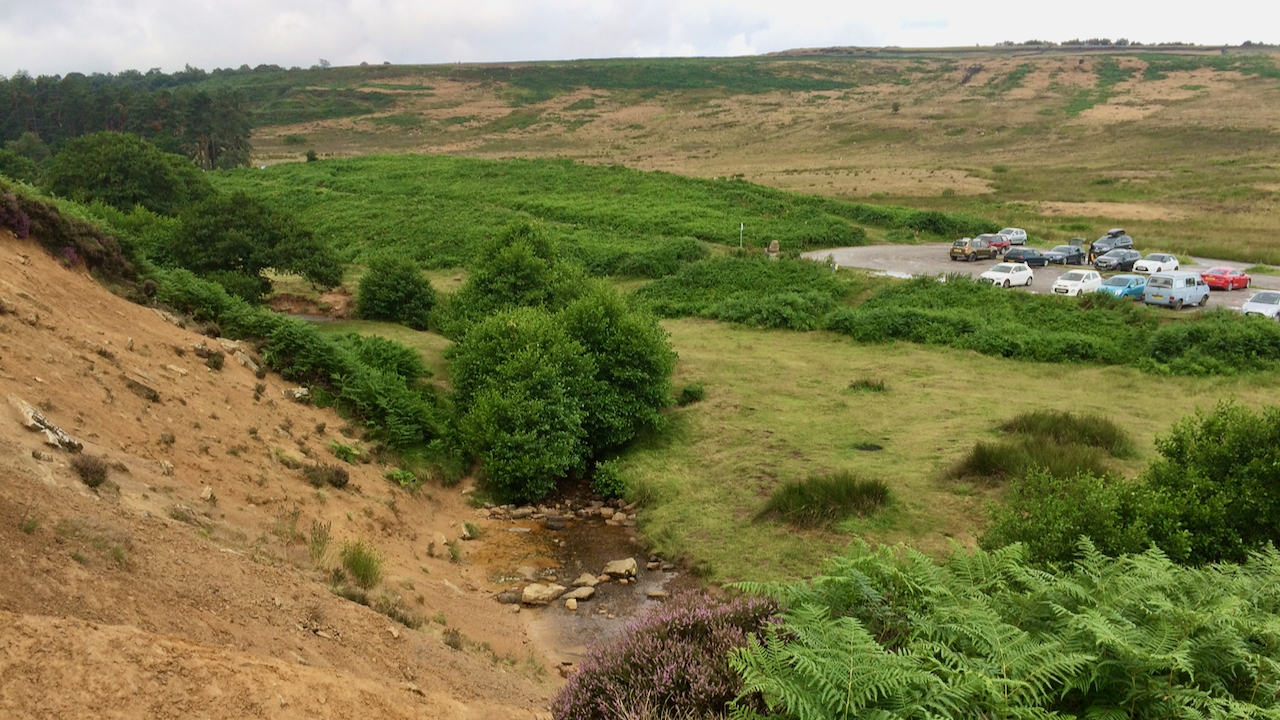 Cod Beck on a summer’s day. The threat of storms has kept the visitors away. Normally this would be heaving. It’s been a popular spot for thousands of years. During the construction of the car park, evidence of prehistoric occupation was found.

During the mid-18th-century, there was a reservoir here supplying a head of water for the flax mills of Osmotherley. It was called ‘High Dam‘, and is clearly shown on the 1854 survey of the Six-Inch Ordnance Survey map.

It was the highest of three dams, ‘Middle Dam’ and ‘Low Dam’ being the others, both upstream of ‘High Mill’, which is now the Cote Ghyll hostel. These two dams were actually located between the mill and the modern Cod Beck Reservoir dam wall.

By the 1890 survey (published 1895), the reservoir is no longer mapped, just the hachured earthworks.

I heard a tale the other day, from an Osmotherley resident, that High Dam burst in 1857. Apparently a farmer noticed the dam wall failing and ran down to warn the mill workers. As a result no lives were lost.

An accident of a deplorable nature occurred to the “high” spinning mill of the Messrs. Yeoman, on Tuesday night, occasioned by the late heavy rains. The accident was caused by the bursting of one of their dams, commonly called the ” middle dam,” which is situated about 200 yards above the mill, and was newly-erected about a year and a half ago. At this point the water runs southward. The mill, which for a long time has been empty, has, within the last six months, been entirely fitted up with new machinery ; and a new engine affixed, to assist when scarce of water, stands on the east side of the river at the low side of the “low dam,” which is also entirely new, and from which it receives its supply. The only entrance into the mill is on the north side, facing the dam ; and, the water rushing with such force from the middle dam, caused it to overflow the whole breadth of the low dam, driving the mill door open, and sweeping a great portion of the south wall down, along with the glass roofing, clearing away the machinery and other things from that portion of the building down the stream, a great deal of which was found several miles distant. Fortunate indeed it was that the flood did not happen in the day-time, when the hands were in the mill, for immediately the rush of water came upon the door, all chance of escape was entirely cut off, and it is more than probable that a sacrifice of life must have been the result. It is, however, a matter of deep regret, that anything should happen to the proprietors to mar their designs, as within the last two years they have been at an enormous expense in making improvements, which have considerably benefitted the town, by giving additional labour.

This sounds the likely incident in which Charles Thompson alias Peace, the subject of yesterday’s post, helped save the machinery.

I have found no report of a failure for High Dam, but of course that doesn’t necessarily mean it didn’t.

Yet another mystery to solve.