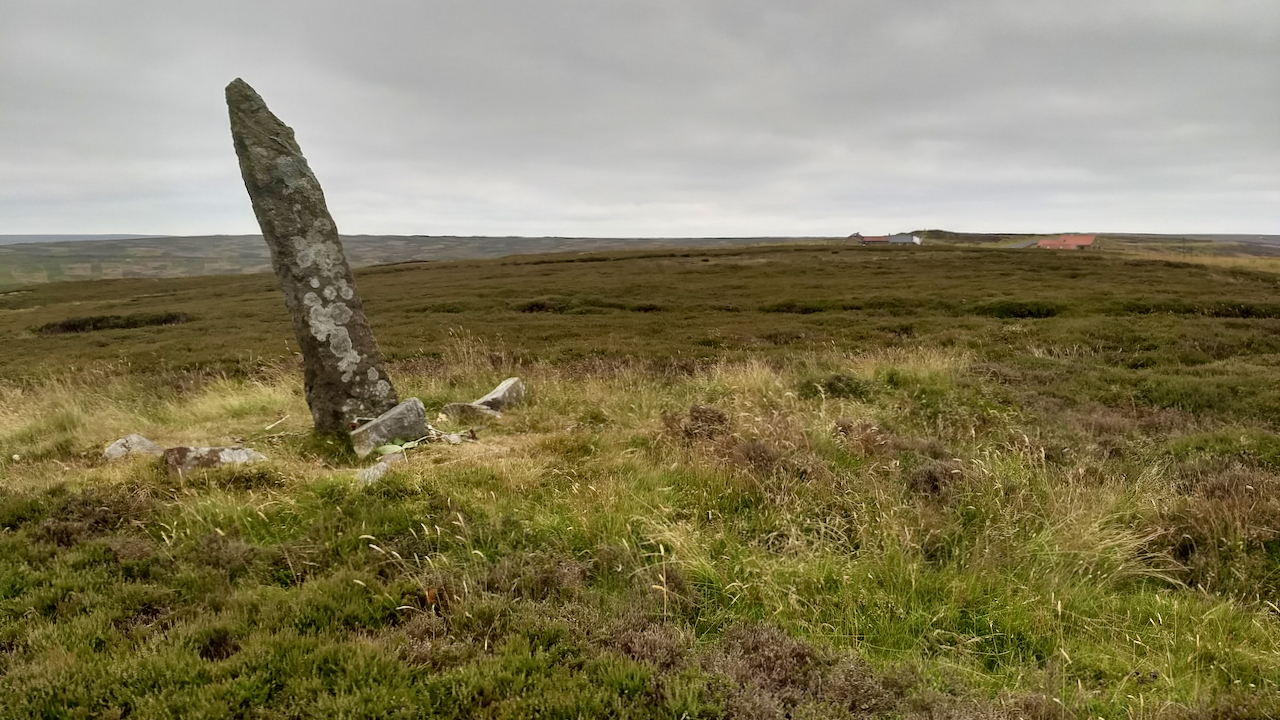 It is thought the stone may be a prehistoric standing stone, in which case it would have been standing when the Crutched Friars of the Order of the Holy Cross arrived in 1347 to set up a oratory at Blakey Ridge on the site of the modern Lion Inn, which can be seen in the right distance. They had been granted by Thomas Lord Wake of Liddell “a toft and 10 acres in Blakehowe Moor in Farndale for the foundation of a house of the same order.”2‘RELIGIOUS HOUSES: Introduction’, in A History of the County of York: Volume 3, ed. William Page (London, 1974), pp. 89-91. British History Online http://www.british-history.ac.uk/vch/yorks/vol3/pp89-91 [accessed 24 July 2021].

The Crutched Friars were an order of mendicant friars from Italy. They arrived in England in 1244, when they presented documents from the pope and asked to be allowed to settle in the country. Each friar carried in his hand a wooden staff surmounted by a cross and also had a cross of red cloth upon his brown or black habit. They settled in London, where they gave their name to an area, near Tower Hill, which is still called “Crutched Friars”. Several attempts were made to establish monasteries in various parts of the country. In Yorkshire, prior to Farndale, there had been houses at Osmotherley and Kildale but all of these were relatively short lived3‘RELIGIOUS HOUSES: Introduction’, in A History of the County of York: Volume 3, ed. William Page (London, 1974), pp. 89-91. British History Online http://www.british-history.ac.uk/vch/yorks/vol3/pp89-91 [accessed 24 July 2021].4Alston, George Cyprian. “Crutched Friars.” The Catholic Encyclopedia. Vol. 4. New York: Robert Appleton Company, 1908. 24 Jul. 2021 <http://www.newadvent.org/cathen/04557a.htm>5‘Friaries: The crutched friars of Kildale’, in A History of the County of York: Volume 3, ed. William Page (London, 1974), p. 270. British History Online http://www.british-history.ac.uk/vch/yorks/vol3/p270a [accessed 24 July 2021].. At Kildale, this was the result of some animosity with the Archbishop of York, but it is probable that the Farndale house succumbed to the Black Death6Crutched Friars and Croisiers: The Canons Regular of the Order of the Holy Cross in England and France. By J. Michael Hayden. Page 91. (Rome: Crosier Generalate [Via del Velabro, 19, 00186; infoosc@oscgeneral.org]. 2013. ISBN 978-1-304-53618-1.)  Available online at http://www.crocigeri.it/resources/hayden-croisiers.pdf.

Incidentally, a display summarising the history of the Lion Inn is mounted in the bar. It erroneously dates the established of this house to be between 1553 and 1558 “during the reign of King Edward III”. Between these dates Queen Mary was on the throne and her father had already dissolved all monasteries in 1542.