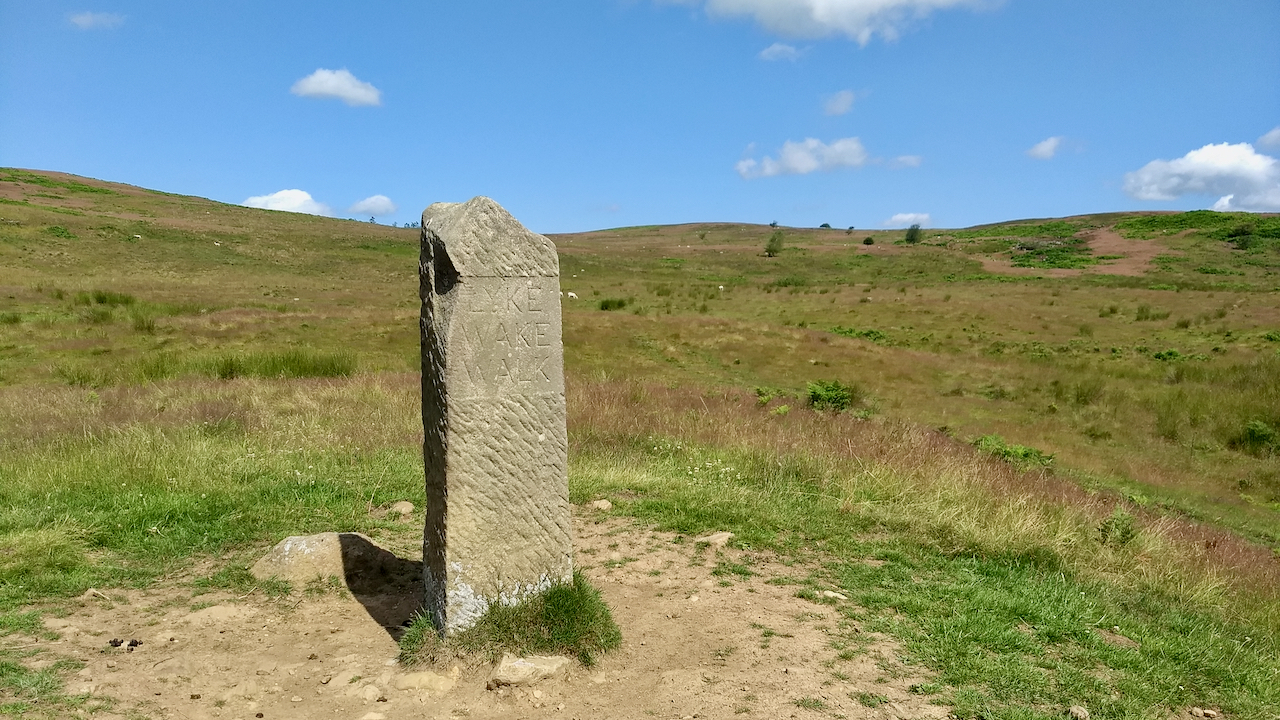 Or is it the finish? A 40 forty mile walk across the highest parts of the North York Moors, with most people tending to start here and finish at Ravenscar on the coast.

Since its inception in 1955, the idea of the late Bill Cowley, the walk rapidly gained in popularity during the 60s/70s; in one year there were almost 20,000 crossings, but suffered a decline due to increased competition from alternative long distant and sporting challenges, and pressure from severe erosion issues1‘Bill Cowley’ (1994) Times, 27 Aug, 17, available: https://link-gale-com.ezproxy.is.ed.ac.uk/apps/doc/IF0502070296/GDCS?u=ed_itw&sid=bookmark-GDCS&xid=c0eba03c [accessed 16 Jul 2021]..

The walk has also suffered from petty politics, The “New Lyke Wake Club” and the “Lyke Wake Walk” which I don’t for one moment pretend to understand.

The traditional route was from the Queen Catherine pub in Osmotherley to a now closed cafe in Ravenscar with the ‘start’ being the trig point on Scarth Wood Moor. At least it was when I first walked it in 1969. A 00:35 start meant a dawn crossing over the last of the ‘four sisters’, Hasty Bank. I remember the low lying mist over the Tees valley, little knowing that four years later I would make Teesside my home.

My main interest in the Lyke Wake has been with the race held in conjunction with the Osmotherley Summer Games. That went east to west and started at Beacon Howe near Ravenscar, finishing in Osmotherley by using the road from Scarth Nick. Start times were handicapped so that in “theory” everyone was supposed to finish in Osmotherley at the same time. That was rarely the case and famously runners’ handicaps were loaded. In recent years the race has been resurrected (but I’m not sure if in the same format) by the Quakers Running Club.

‘Lyke‘ comes from an Anglo-Saxon word signifying a corpse, and ‘wake‘ is also Anglo-Saxon meaning a vigil or a watching. The custom was that a body was never to be left from the moment of its last breath until it was laid into the ground. It was watched day and night, hence the night before the funeral became known as the ‘lyke wake‘2‘A Popular Antiquity’ (1881) Sunderland Daily Echo and Shipping Gazette, 15 Nov, 2, available: https://link-gale-com.ezproxy.is.ed.ac.uk/apps/doc/GR3224407661/GDCS?u=ed_itw&sid=bookmark-GDCS&xid=f94ec2e4 [accessed 16 Jul 2021]..

One Reply to “Start of the Lyke Wake Walk”