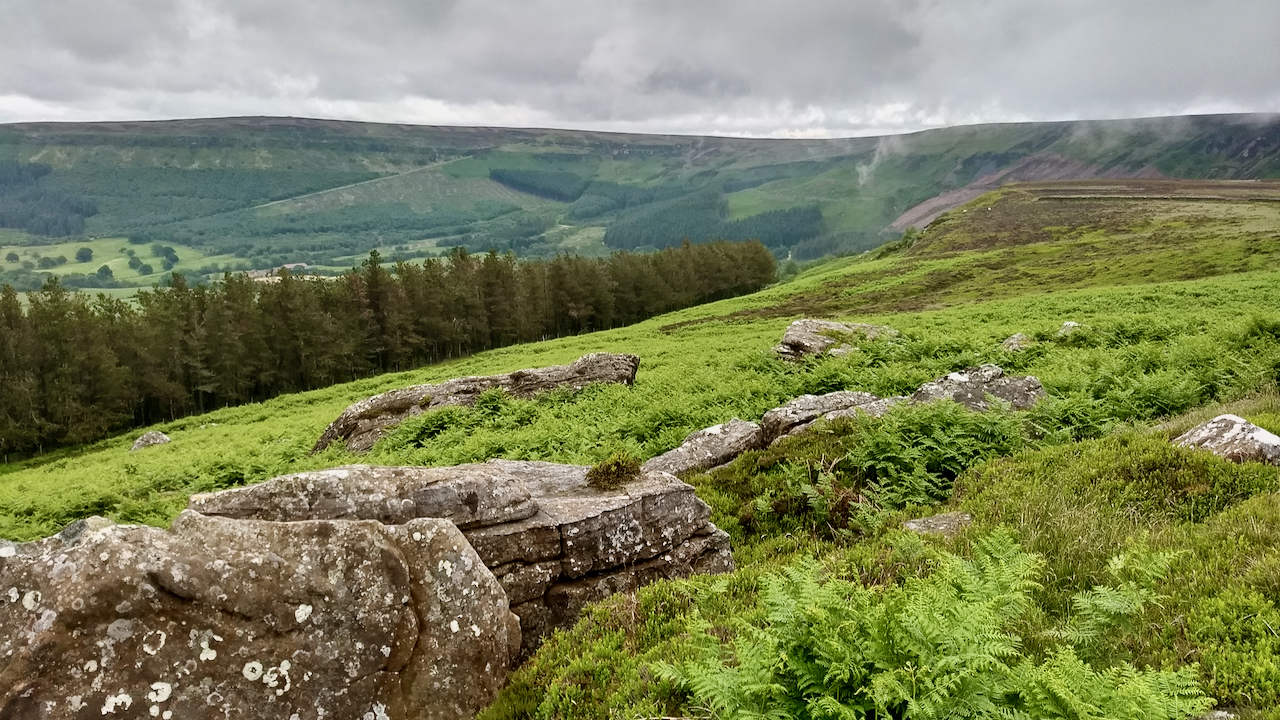 An obscure sandstone outcrop on Carr Ridge of Urra Moor, and overlooking to narrow north-facing valley of Ingleby Botton. The word Botton comes  from an Old Scandinavian word ‘Botn’ for a hollow or head of a valley of just this shape, rounded and flat-bottomed1Atkinson, Rev. J. C. “Forty years in a moorland parish; reminiscences and researches in Danby in Cleveland” 1891..

The early surveyors of the Ordnance Survey must have misinterpreted the local pronunciation which would be Bo’tton and it as Burton Head2Cowley, Bill. “The Lyke Wake Walk”. The Dalesman Publishing Company Ltd. 1967 (first edition, 1959)..

It was still referred to as Burton Head when the Aberdeen Journal reported in 1932 an attempt on the world’s gliding record. “Flying-Officer E. L. Mole and Flying-Officer E. O. Wanliss made their attempt from Burton Head, near Ingleby Greenhow, but after remaining in the air for four hours, Mole was forced to curtail the flight because of descending clouds and a rising gale. The attempt is to be repeated in the same neighbourhood as soon as the wind is favourable.“3“Gliding Attempt Fails.” Aberdeen Journal, 19 July 1932, p. 6. British Library Newspapers, link-gale-com.ezproxy.is.ed.ac.uk/apps/doc/JE3234497883/GDCS?u=ed_itw&sid=bookmark-GDCS&xid=f86e4740. Accessed 27 June 2021.

In the 1930s, gliding was a young sport rapidly increasing in popularity, particularly so in Germany. In 1931, Gunther Grönhoff flew 272 kilometres from Munich to Kadaň in Czechoslovakia4Wikipedia Contributors. “Gliding.” Wikipedia, Wikimedia Foundation, 2 May 2021, en.wikipedia.org/wiki/Gliding. Accessed 27 June 2021.‌.

Although the newspaper report does not say, I think this attempt was a time record, to see how long they could stay up, likely that there was a desire to challenge the German dominance. It is not known whether the attempt was repeated at Burton Head, but the following year Mole, flying a new British design of glider, remained aloft for 6 hours 55 minutes over the Dunstable Downs reaching a height of 1,500 feet. To reinforce my Nationalistic competition supposition, The Times reported that “This flight has proved that it is greatly superior to the German soaring gliders which we have hitherto been forced to import.“5“British Gliding Feat.” Times, 31 July 1933, p. 12. The Times Digital Archive, link-gale-com.ezproxy.is.ed.ac.uk/apps/doc/CS203106559/GDCS?u=ed_itw&sid=bookmark-GDCS&xid=eb8c60a4. Accessed 27 June 2021.

I do wonder how Wanliss and Mole actually got their glider up to the top of Urra Moor.