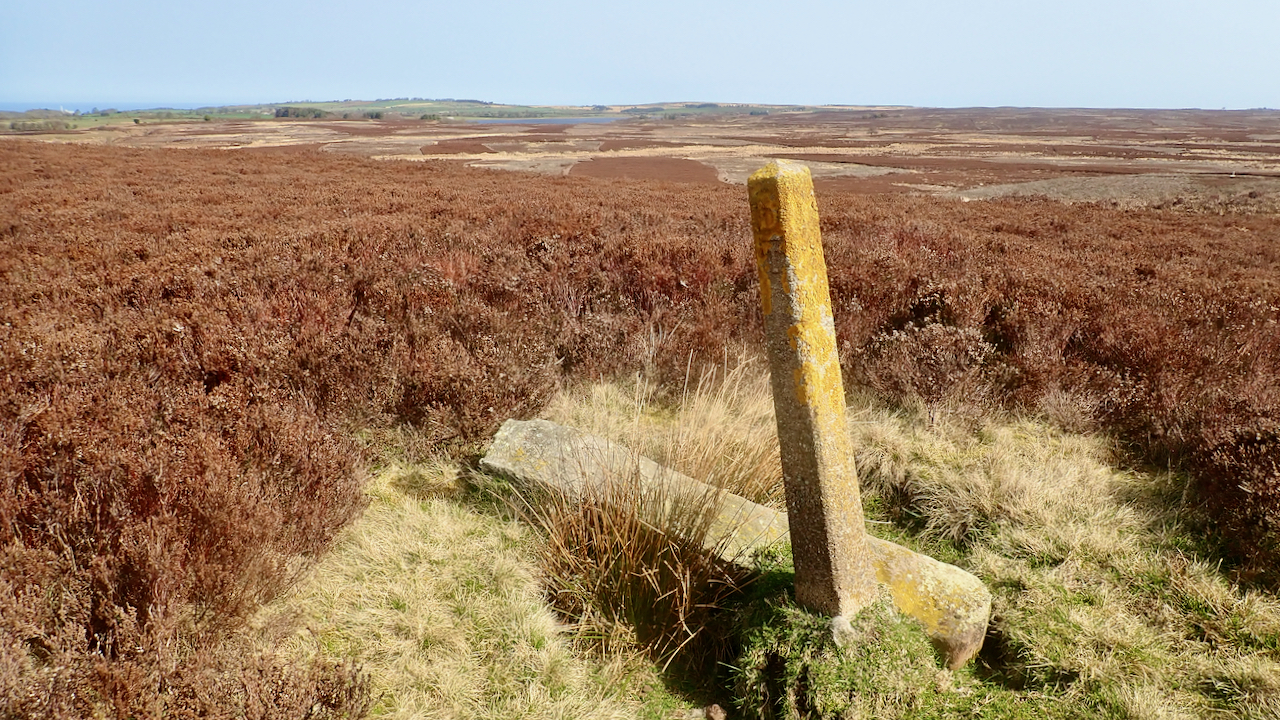 It’s good to feel freed from the restrictions of lockdown and the warmth of the spring sunshine. Not many crowds out here. I’m exploring the moors to the south west of Scaling Dam. Waupley Moor, Easington High Moor, Danby Low Moor and Lealholm Moor.

I do like these moors. They’re more varied than those on the west. Still predominately heather clad though but with significant patches of grasses, sedges and bog. The contours lines are more squiggly too. Perhaps that’s the reason for the bogs.

If you’re lucky the boundary between one moor and the next might follow a stream, but more often than not it will be just a straight line on the map connecting two feature or landmarks.

Great Dinnod is one such landmark, but it would be hard to find in the mist. Just one contour encircling a flattish knoll. There is said to have been a boundary stone here since the 13th-century1“HER Map: North York Moors National Park.” North York Moors National Park, 2021, www.northyorkmoors.org.uk/discover/archaeology/her-map. GREAT DINNOND NYMNPA HER Record No: 5053/5180. Cleveland HER Point SMR: 3741. Accessed 30 Mar. 2021.. That may well be it lying prone on the ground. Perhaps it’s broken, which may explain why it hasn’t been re-erected.

In its place, a concrete post stands. A travesty yet it’s calcareous content makes it a perfect habitat for Xanthoria aureola, a lichen which is not usually found on the acidic northern moors.

On the west face are the initials ‘D T’ and on the east ‘G T’. I’m not sure what these stand for. Someone has suggested D is Danby and G is Glaisdale. But T? Township?

About 600m away is another knoll, Little Dinnod, which is not even worthy of a ring contour, but is the next landmark on the boundary. I had been tipped off (thanks, John) that half way between the two is a peculiar piece of iron work.

It’s about the size of a manhole cover, like a wheel with five spokes, yet the absence of a rim and a boss on outside (12 o’clock position on the photo) would rule out it being a railway wheel or similar. There are some letters in the casting but they’re too corroded to be readable. It is close (100m or so) to the line of the railway that was never built, so my best guess so far is that it’s some scrap left over from the building of the earthworks for that.

Oh yes, and it seems to be covering a water filled sump yet it is not located at a low point in the terrain.

I have put a few feelings out but if anyone has any ideas it would be appreciated.