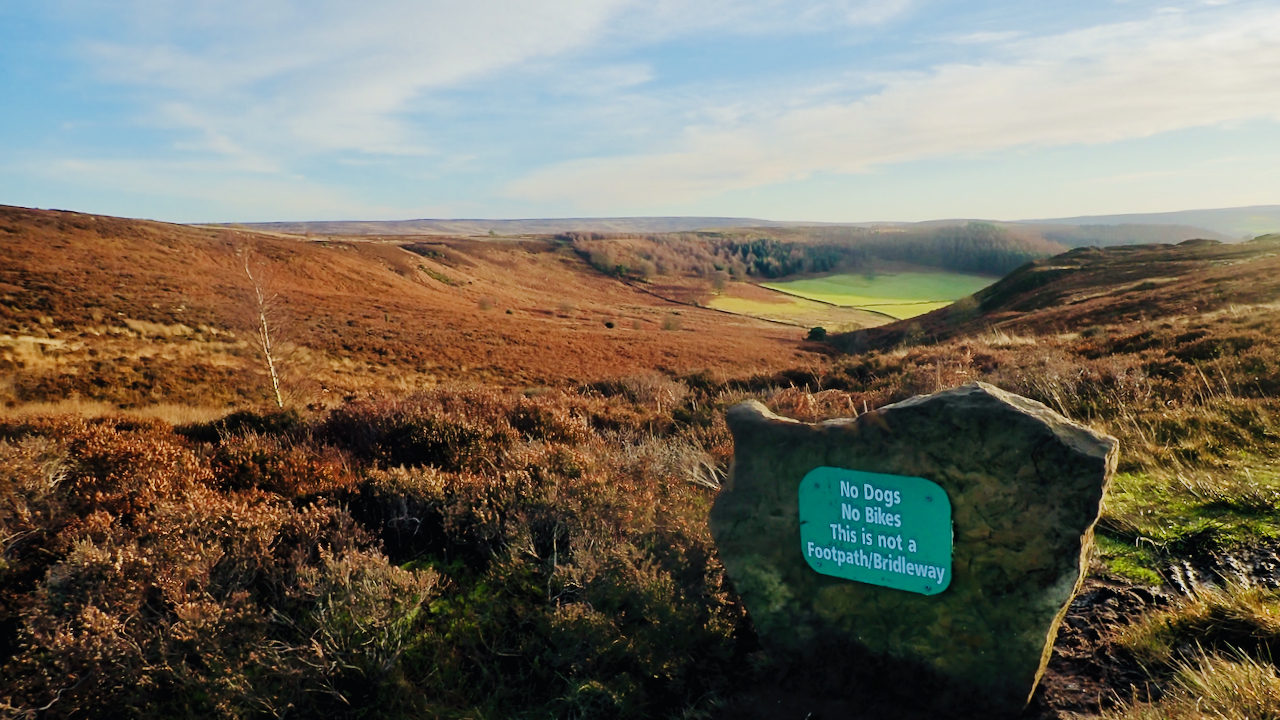 No Dogs
No Bikes
This is not a
Footpath/Bridleway

There is an increase in these signs across the moors. This one has been placed in the last fortnight or so right across a well-used path on Great Ayton Moor leading to Lonsdale Quarry. A blatant attempt by the landowners to intimidate the public to keep off the moors, despite the fact that this is Open Access Land on which the public is entitled to roam.

Of course, cycling is not permitted and I have always thought dogs were not allowed on Open Access Land but this Government website says that, so long as dogs are on a lead, they are. If I really wanted to be pedantic I would say it is a footpath as it’s well-trodden. It might not be a ‘Public Footpath’ but it is definitely a footpath.

Which brings me to the Government’s proposals to criminalise trespass which were included in the Conservative Party 2019 Manifesto. They are an unnecessary and draconian attack on our freedoms, potentially making criminals of walkers and runners who inadvertently stray from the path, wild campers in the hills, the travelling community and peaceful protesters.

A public petition opposing the criminalisation of trespass was signed by 134,000, as a result, the proposals are due to be debated at the Petitions Committee on 25th January 2021.

It is essential that you ask your MP to attend and represent your views, however, they will need to register to attend therefore you need to contact your MP as soon as possible.

To this end, a website has been set up with a template email which you can easily tweak and send to your MP. It will ask for your postcode to show you’re a constituent, otherwise, he/she won’t have to respond.

Template email for you to adapt and send to your MP:
Dear ____MP,
Subject: Don’t criminalise trespass – please register to attend the Petitions Committee debate on 25th January
As your constituent, I’m very concerned by the Government’s proposals to criminalise trespass. Together with over 134,000 other people, I signed this Parliamentary petition to oppose the criminalisation of trespass (here: https://petition.parliament.uk/petitions/300139). If you follow the link, you can click through to a map showing how many other of your constituents also care deeply about this.
The petition is now scheduled for a Petitions Committee debate in Westminster Hall on Monday 25th January 2021 at 4.30pm, and I would like you to attend to represent my concerns. Please register to take part in the debate with the Speaker of the House by Friday 22nd January.
I’m concerned because criminalising trespass would be an extreme, illiberal and unnecessary attack on ancient freedoms that would threaten ramblers who stray from the path, wild campers, Travellers, peaceful protestors and the wider public keen to enjoy nature. Fear of criminalisation may even deter amateur naturalists from carrying out wildlife surveys, as some scientists have warned.
Access to nature is vital for everyone’s physical and mental health – something lockdown demonstrated vividly. Last year’s exceptional spring, combined with the coronavirus regulations, meant many people stopped to observe and experience nature in ways they hadn’t since childhood. With restrictions on overseas travel, many more people enjoyed their summer holidays in the British countryside. Sales of camping equipment have soared; British Canoeing has seen a 40% jump in membership; and National Parks have seen huge numbers of visitors from sections of the population who’ve never visited them before.
Criminalising trespass would create a massive chilling effect on visits to the countryside. Many people are already put off visiting rural Britain through unfamiliarity, poor transport links, existing civil trespass laws and a general sense that they don’t belong or aren’t welcome in the countryside. Such feelings are multiplied greatly for Black, Asian and ethnic minority Britons.
Criminalising trespass isn’t just draconian, it’s completely unnecessary. Landowners who wish to sue trespassers can already do so via the courts. Police forces have stated they don’t want or need any additional powers to deal with unauthorised encampments, whether by Travellers or protestors (see https://www.theguardian.com/world/2019/nov/14/police-oppose-traveller-and-gypsy-camp-crackdown-foi-shows). Gypsies and Travellers are already amongst the most marginalised communities in the UK, and criminalising trespass or increasing police powers of eviction would compound the inequalities they experience.
Criminalising trespass is opposed by numerous access and environment groups, from the Ramblers and British Mountaineering Council to CPRE and the British Horse Society, who wrote to the Home Secretary earlier this year urging her to reconsider the proposals (see https://www.thetimes.co.uk/article/rethink-trespass-law-ramblers-urge-priti-patel-8ghgj3m8n). It is also opposed across party lines: the chair of the Conservative Environment Network, Ben Goldsmith, wrote an article in the Telegraph this Autumn calling on the Government to drop plans to criminalise trespass (see https://www.telegraph.co.uk/environment/2020/10/22/ben-goldsmith-calls-government-drop-plans-criminalise-trespass/).
The Petitions Committee has scheduled a debate on this subject for Monday 25th January. I’m therefore calling on you as my representative to please attend the debate, and to relay my concerns and those shared by people up and down the country.
Yours sincerely,
[Your name and postcode]

13 Replies to “A new sign’s appeared”