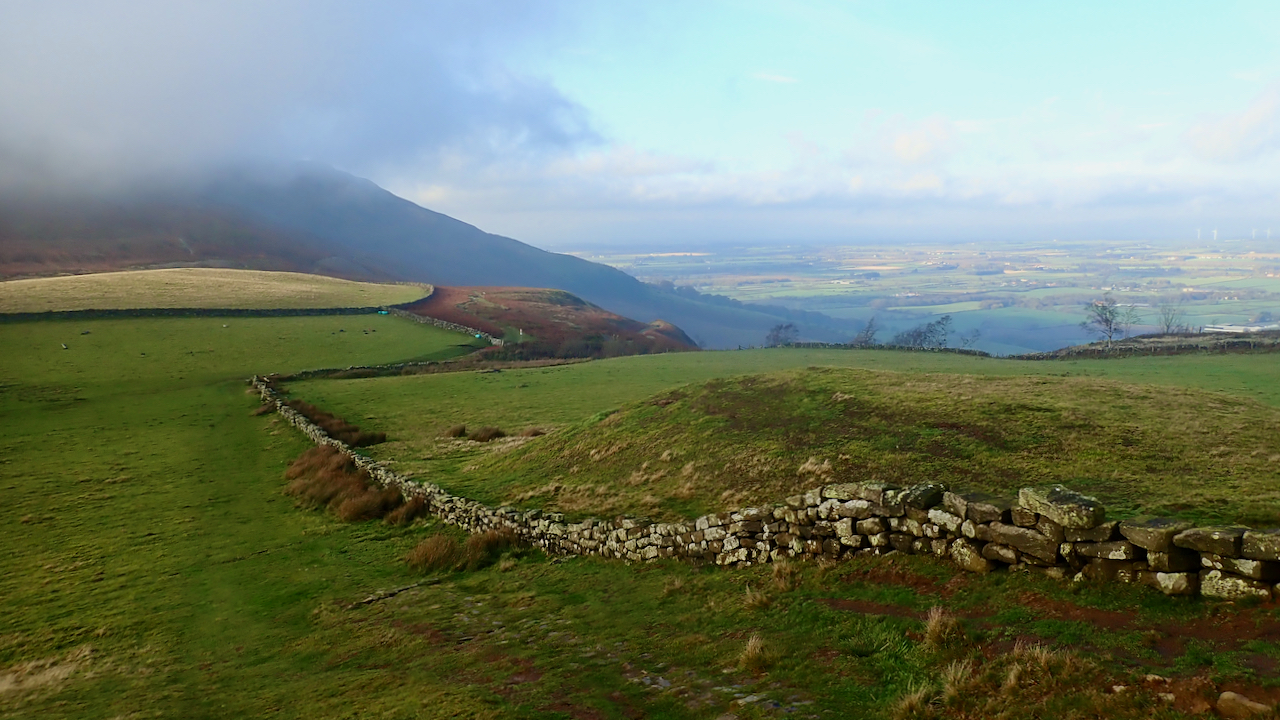 A morning of swirling cloud and bursts of sunshine. The mist cleared long enough to snatch this photo as I descended Cold Moor to the nameless col with Cringle Moor. Here, there is the base of the ancient Donna Cross and further down towards the low lands a stream develops called Halliday Slack but otherwise the Ordnance Survey maps are silent.

On an unrelated aside, William Camden, the English historian and topographer died this day in 1623. He was born in 1551 and his best known for his guide to the British Isles ‘Britannia’, first published in Latin in 1586, a year in which Elizabeth I was on the throne and another queen, Mary, Queen of Scots, was tried for treason and sentenced to death.

In one paragraph in Britannia, he mentions Stokesley:

Hard by at Huntly Nabb, the shore that lay for a great way in length open riseth now up with craggey rockes, at the rootes whereof there lie scattering heere and there stones of divers bignesse, so artificially by nature shaped round in maner of a globe that one would take them to be big bullets made by the turns hand for shot to bee discharged out of great ordinance. In which, if you breake them, are found stony serpents enwrapped round like a wreath, but most of them are headles. Then see you from thence Wilton Castle, sometime the Bulmers, and above it at Dobham the river Tees voideth into the Sea after it hath lodged sundry rivers, and at the last one that is namelesse, beside Yare a mercate towne well known, which river watereth Stokesley, a little mercate towne, likewise that hath a long time appertained to the noble family of Eure. Beneath which places, Wharton Castle belonging to the Barons Menill, and Harsley to the family of Hotham, and afterward to Strangwaies, now wrestle with old age, and hardly hold up their heads.

Perhaps a little help is needed with the names. My best guesses are:

And of course by “… stony serpents enwrapped round like a wreath ..” Camden is referring to ammonites, the Jurassic fossils.

3 Replies to “The col between Cringle Moor and Cold Moor”