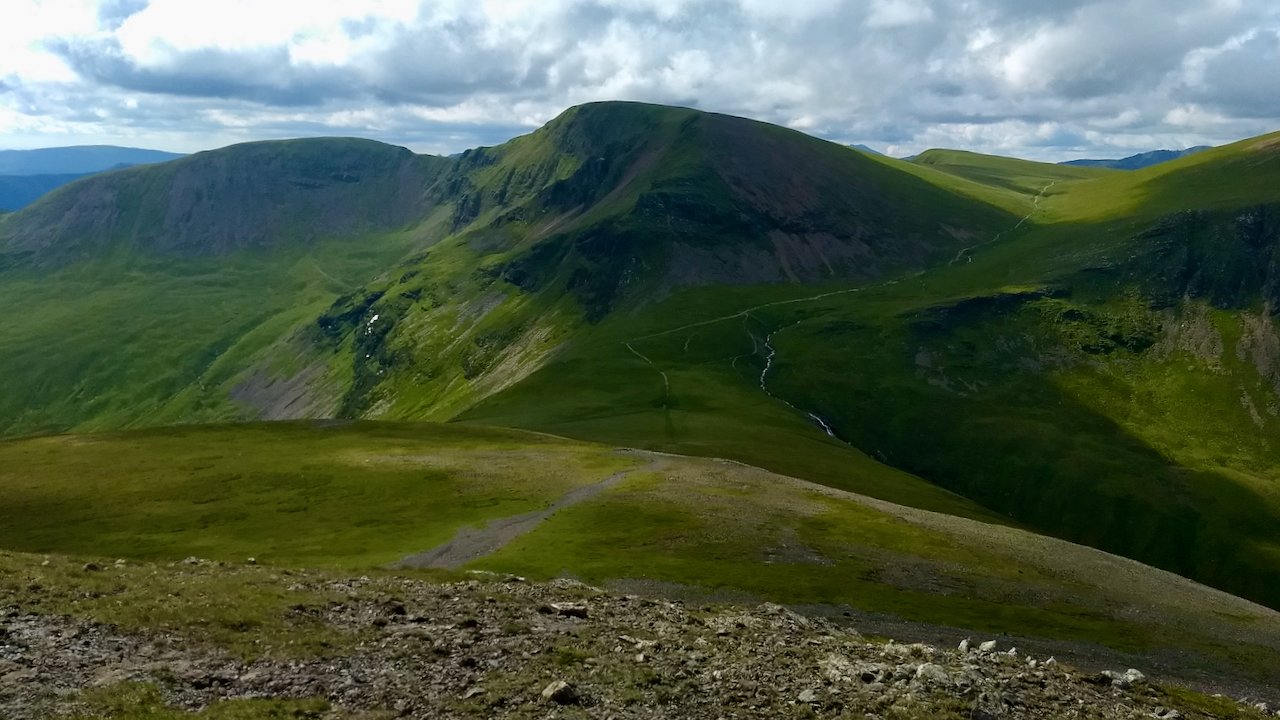 A grand morning with the tops free of cloud so the high fells beckoned. From Lanthwaite near Crummock Water, straight onto the south-west ridge of Whiteside, then a ridge run to Hopegill Head and back via Coledale Hause and Gasgale Gill. Back in time for breakfast.

The culmination of a good few days in the Lakes but today’s outing was made all the more memorable by a fleeting glimpse of nature at its rawest. Coming down Gasgale Gill, following Liza Beck, the sudden movement of a raptor chasing a smaller bird, probably a meadow pipit. One side of the beck at this point was a rocky crag and the pipit seemed to be managing to hold the larger bird off by flying back and forth close to the rock. But the end was inevitable. Both landed just out of sight behind a bank. A few steps further and the larger bird flew off down the gill leaving me with a glimpse of blue as it flew out into the sunlight. There was no sign of the pipit so I guess it had been taken.

I am not very confident in bird identification, but the blueness gives me a pretty strong hint it must have been a male merlin. A North Country dialect name for the bird is the ‘Blue hawk’ and its Gaelic name ‘Seabhag-gorm-an-fraoich‘ translates as ‘Blue Hawk of the Heather’.

The photo is of Coledale Hause, the pass or col between Gasgale Gill and Coledale Beck. Beyond is Crag Hill or Eel Crag as it is sometimes called.

Although it is well known that ‘hause‘ means a mountain pass or col, many sources say the origin of the word is unknown. The Ordnance Survey, however, reveal it to be of Scots origin. Scots is the language of lowland Scotland, not the Gaelic of the Highlands. It is a Germanic language, closely related to Anglo-Saxon. Now an 1829 dictionary of North Country words, lists ‘hause‘ as of Danish Saxon or Germanic origin and meaning the neck or throat and quotes the phrase “It’s down the wrang hause.”

Now I am not going to jump to any conclusion but the analogy of a mountain pass and your pharynx is intriguing.