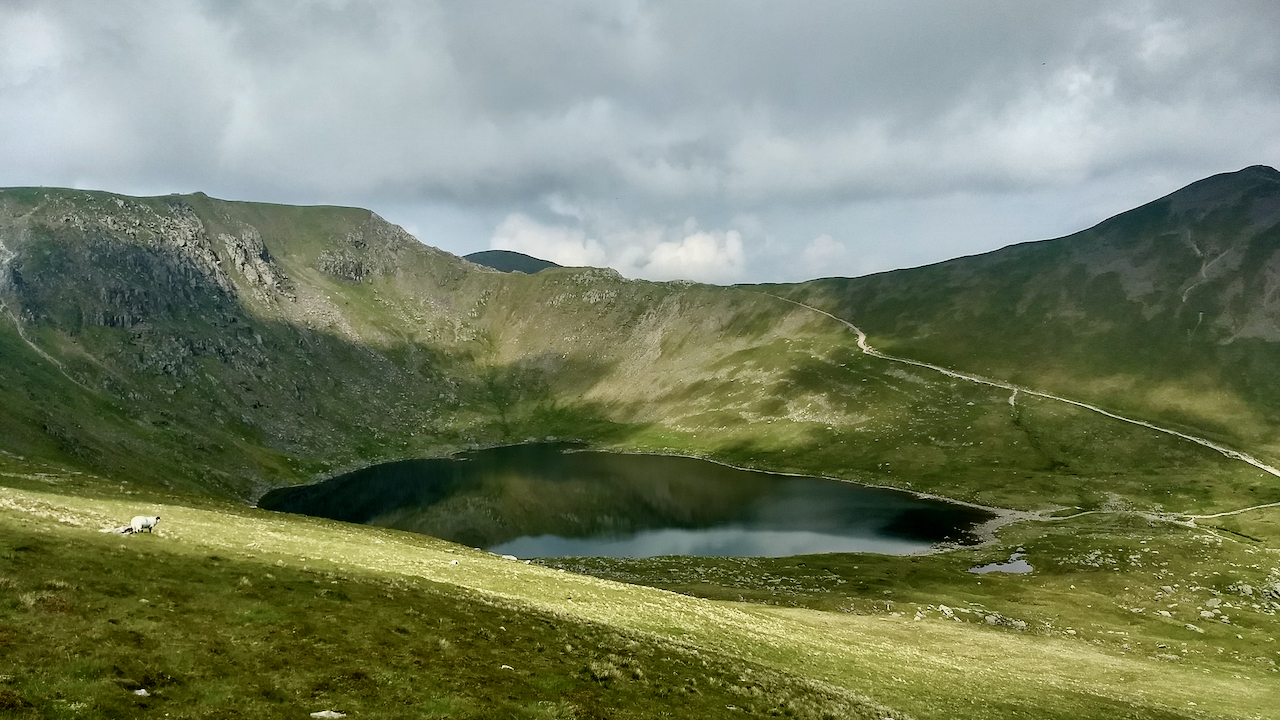 It’s good to be back in the Lakes even if only for a day trip. I could have packed my tent, camped high and not really increased the risk of spreading Covid-19. But the rule is no overnight stays and rules are rules.

Filling the cirque below Helvellyn, Red Tarn is perhaps one of the finest of the glacial tarns. Surprisingly it’s 26 metres deep and was actually made 2m deeper in 1860 when an earth dam was built to store water for the mining operations in Greenside. The dam was partially dismantled in the 1930s allowing the water level to revert back to its natural level.

Helvellyn is left with Swirral Edge connecting it to Catstycam, right, once regarded as one of England’s highest mountains. William Camden writing in the 16th-century quotes a proverb:

Skiddaw, Lanvedin, and Casticand
Are the highest mountains in all England.

Wainwright gives Catstycam another alternative name, Catchedicam by which he probably was referring to Sir Walter Scott’s poem ‘Helvellyn’:

I climbed the dark brow of the mighty Helvellyn,
Lakes and mountains beneath me gleam’d misty and wide;
All was still, save by fits, when the eagle was yelling,
And starting around me the echoes replied.
On the right, Striden-edge round the Red-tarn was bending,
And Catchedicam its left verge was defending,
One huge nameless rock in the front was ascending,
When I mark’d the sad spot where the wanderer died.

The wanderer here is Charles Gough of Manchester who fell to death in 1805 at a spot on the left of the photo. There is a memorial on Helvellyn summit. His dog, Foxey, guarded his master’s body for three months until it was discovered. Some say the dog survived on rabbits and carrion, a more macabre suggestion is that it ate its master. Richard Adams was also familiar with this story of Charles Gough, in his novel ‘The Plague Dogs’, Foxey’s ghost makes an appearance beside Red Tarn.