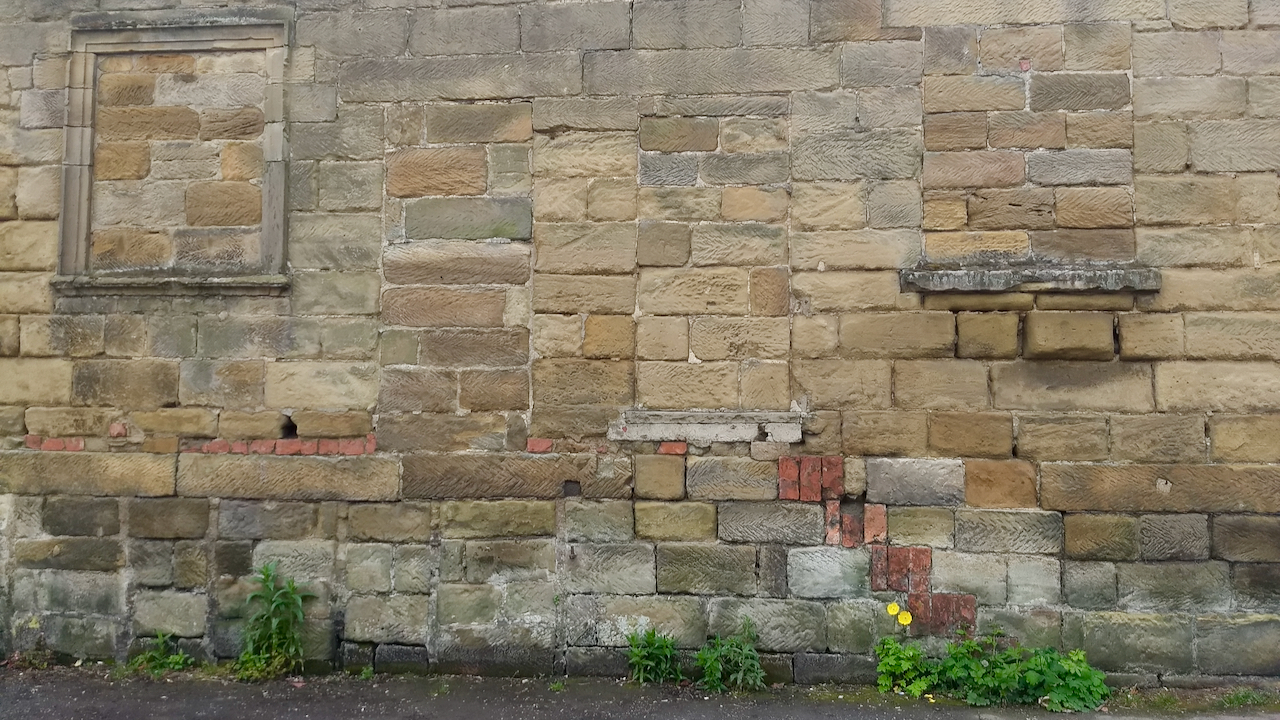 I’ve had my eye on this wall for years. Such a fascinating assortment of alterations over the years. Windows, doors, a platform, steps. Until this coronavirus, there are usually cars parked in front of it but this morning I was surprised to see it clear. Even those yellow poppies are taking advantage of the light.

The obvious questions are how old is it and who owned the building? I can answer neither.

An outline is shown on the 1853 map but it could have been rebuilt.

Who owned it? Well, from about 1880 to 1939 the property immediately behind, fronting the High Green was, I think, Dodsworth’s the Grocers, which is now a charity shop but perhaps better known as the former NatWest Bank. It would have been a long narrow plot, not suited I would say to a grocer.

Immediately to the left of this wall was R S Williamson the Chemist. In the earlier 1930s, this was also a grocer, Coates Grocer & Provisions Dealer. It is now a gift shop, Coopers Gifts.

Interestingly high on the wall to the left of Coopers Gifts is a faded ghost sign advertising Wm. Pearson who was a builder living at Well Cottage, which is now the newsagents, Worthy Pearson, just across the road. In a 1929 trade directory, Arthur Pearson, also a builder is listed as living at Park Cottage, which I would hazard a guess was on the site of Well Cottage. Arthur Pearson was also a stonemason and was responsible for the carving of the village war memorial.

But I digress. To the right of our wall, would be the back of the Royal Oak, which incidentally, had incarnations as the ‘Oak Tree’ and the ‘Green Tree’.

So, after all that, I am none the wiser. The openings were obviously used for loading something. But what? Who knows.