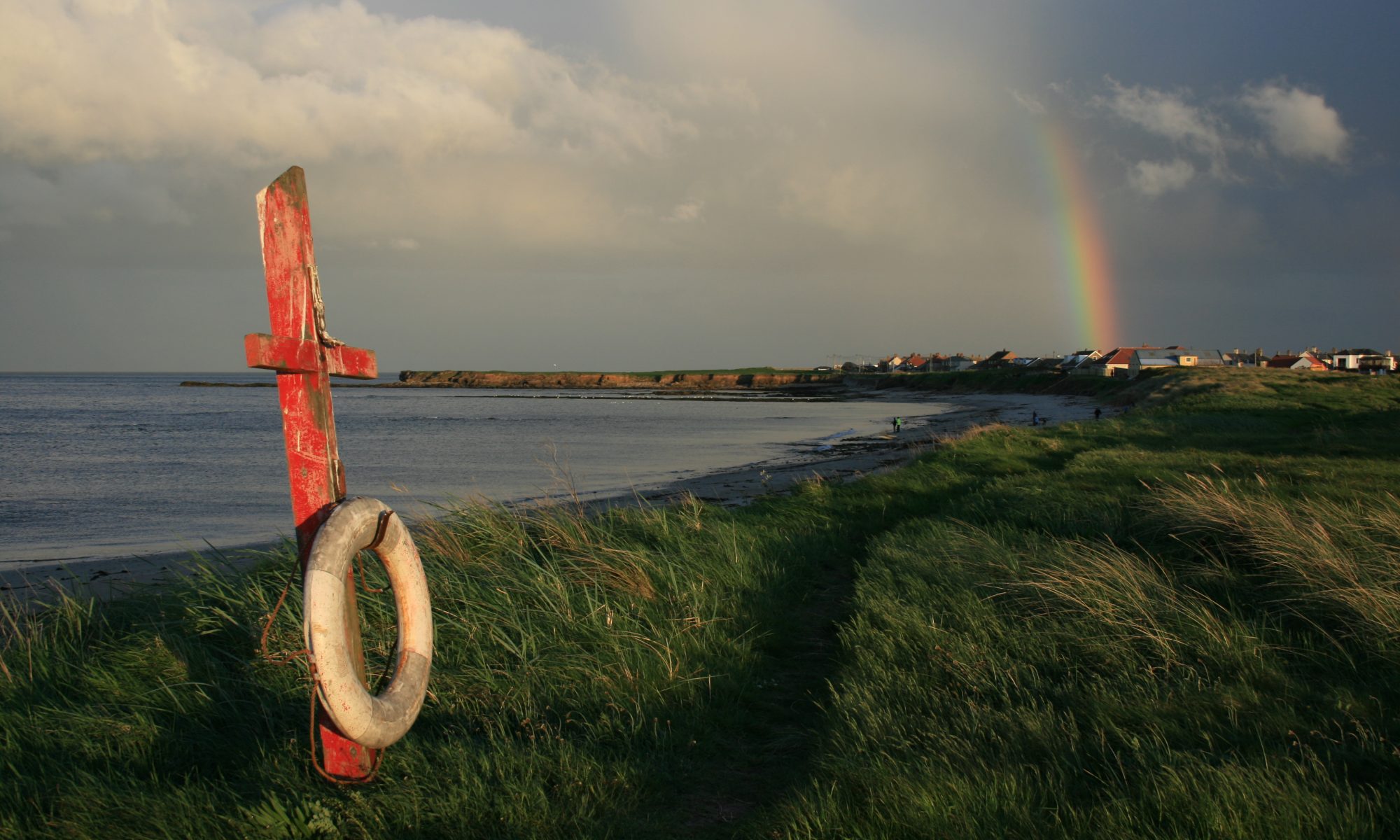 I suppose I am drawn to the sea, perhaps I am a thalassophile at heart, but not quite ‘sjøvant‘ as the Scandawegians would say, not being entirely at ease. I remember a works outing in 2003, a sailing trip from Hartlepool to the Farne Islands for the weekend. I was so bad, even though the sea state was calm. I could cope with sea kayaking when it was quite rough and choppy but not a long rolling swell.

Today’s posting is of a navigation aid on the Northumbrian coast just north of Beadnell. A simple wooden cross intended to hold a lifebuoy but conveniently placed to guide boats into the safety of a narrow sandy bay between rocky scars known as Collith Hole. In the distance, the end of the rainbow is at the fish and chip shop at Beadnell.

A ‘hole‘ is a cave or fissure, from the Old English hol and is extensively used as a coastal feature all along the North East from Boggle Hole at Robin Hood’s Bay to here at Collith Hole. The name seems not to be used further north.

The ‘SS Isorna‘, a 6,809-ton vessel, was wrecked at Collith Hole on 27th March 1941. I haven’t been able to find out any further details but I guess the captain wasn’t trying to beach the vessel.

An ‘importuous‘ coastline is one that has no suitable spot for a harbour. The North East coast can hardly be described as importuous. There are numerous flat sandy bays where the tradition north eastern flat-bottomed boat, the coble can be hauled ashore.

And there are traditional harbours too. Beadnell has one which actually faces west, quite an achievement on the east coast.

An old name for a harbour is a ‘haven‘, either from the Old English hæfen or Old Norse höfn, the jury’s out but they both mean essentially the same thing, a refuge. Beadnell Haven is somewhat of a misnomer, being a fissure in the rocks that is actually narrower than Collith Hole and not much of a refuge.

There are two other coastal features which are worth mentioning:

A ‘wyke‘ is from the Old Norse vik meaning a creek, inlet or small bay, but seems to be a word confined to the Yorkshire coast, for example, Hayburn Wyke and Cloughton Wyke.

The other word is ‘pool‘ from the Old English pol for a small body of water or a deep and still spot in a river. The obvious examples are Hartlepool and Liverpool.
 Open Space Web-Map builder Code