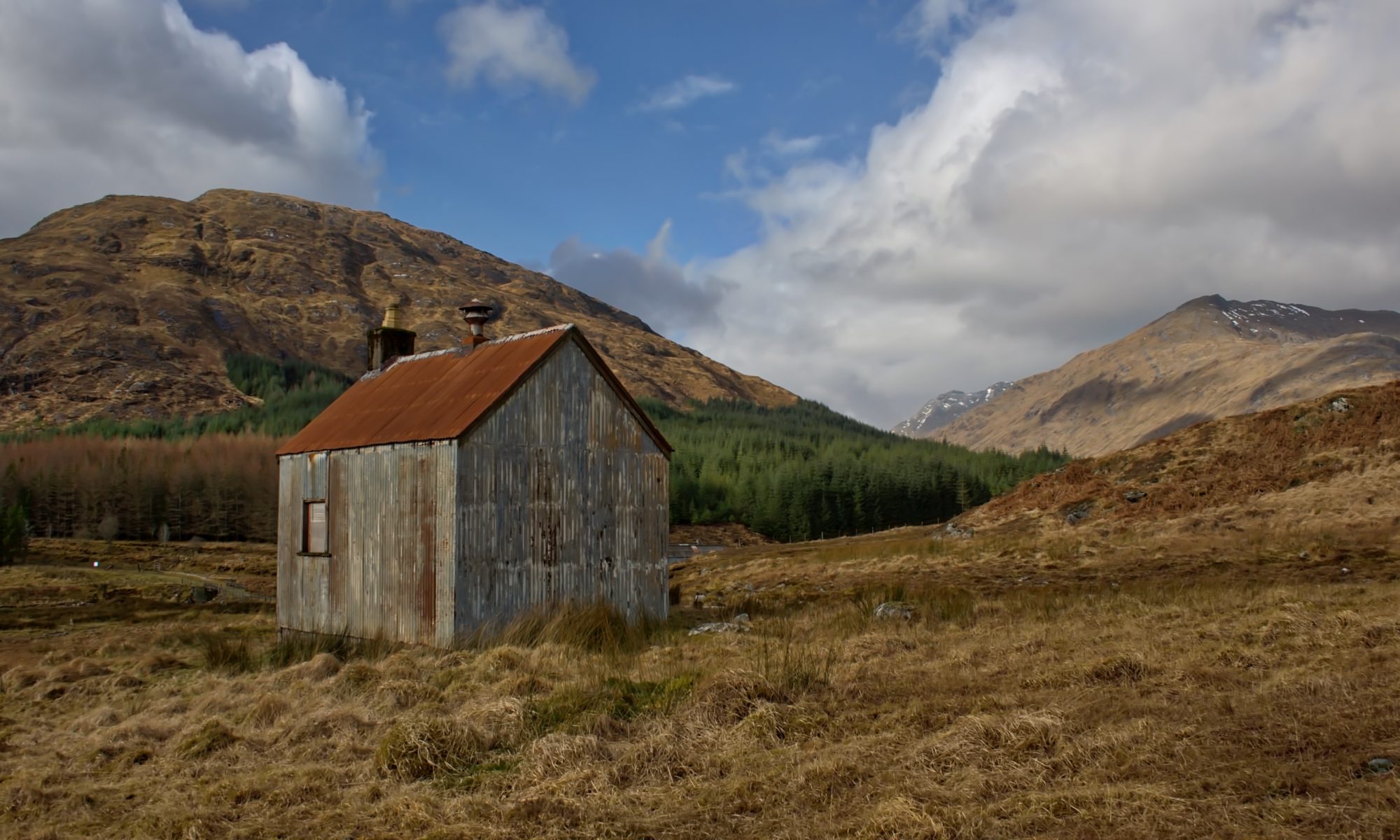 A tin hut stands at the confluence of Glen Pean and Glen Dessary at the head of the 12 mile Loch Arkaig. This is Strathan, the end of the public road from Spean Bridge and a parting of the old routes north to Loch Nevis and south to Glenfinnan. It is probable that the Glen Dessary path was built at the time of the herring boom on the north-west coast when Loch Nevis was an important fishing ground and used by ponies bringing barrels of herring to the markets further south.

For me, it marks the start of a 3½ mile hike into A’Chuil bothy as part of a maintenance squad. I have always understood the tin hut, which was once a familiar sight but has now been demolished, to be the old school but now I’m not so sure. Cranmore, the Scottish National Record of the Historic Environment indicates that the old school at Strathan was a stone-built structure which is still in use as an agricultural building.

However, re-reading an email I was given in 2014 from a lady whose father actually lived at A’Chuil contradicts this. The lady, Sandra Pryce, wrote:

My father’s name was William Blair Douglas born 1905 in Skye, second youngest of a family of eight. His parents were Alexander and Annie Douglas and in 1923 they left Skye and went to live in A’Chuil Glendessary. Alexander was employed by Sir Cameron of Locheil as a shepherd and the family remained there until 1938 when he retired. They then went to live in Glenelg. William had several jobs when he lived there, he had been a gillie, a shepherd and had the contract to build the last six miles of road up Loch Arkaig side which took some time to complete. He then went to work for the Forestry Commission and was employed by them until he retired in 1970.

When they lived in Glendessary there were about eight families in the area, Stewarts, Hendersons, MacInnes were some of the surnames. There were twelve children at one time attending the small school, a tin hut near Strathan. My aunt used to walk once a week to Spean Bridge to buy some shopping which took most of the day there and back. My father and friends would walk over the hill into Glenfinnan to attend a dance then return sometime next morning. My uncle Norman Douglas married while they lived there and their reception was held in the barn at Strathan, It was all cleaned out and decorations hung and everyone had a great time.

When my father was 86 he completed the walk from Strathan to Glenfinnan, he wanted to do it once more before he died. He always walked whenever he could right up till he died at 91.

Could the stone-built school, marked on the 19th-century O.S. map, have been replaced by the corrugated tin structure once the population decreased? Even so, twelve children in a schoolroom the size of the tin hut would have been quite cosy. Interestingly, there is an image of a near-identical tin hut school on Isle Martin near Ullapool. Perhaps it was a standard design.

Today, Strathan is a one-house community, lived in by the gamekeeper and his family. Nearby are the ruins of some old barracks, Tigh nan Saighdearan, built by Government forces around the time of the Jacobite Rebellion. Perhaps soldiers were stationed there when six caskets of Spanish gold bound for the Bonnie Prince were brought over the Glenfinnan pass to Loch Arkaig and hidden near here by his supporters. The last person to be entrusted with the secret of the gold’s whereabouts was Macpherson of Cluny, head of the Clan Macpherson but Charles left Scotland in September 1746 without his gold and bitter rows broke out between Charles, Cluny and factions of Jacobite supporters. Some say the gold is still hidden, on the shores of Loch Arkaig.

8 Replies to “The old schoolroom, Strathan”