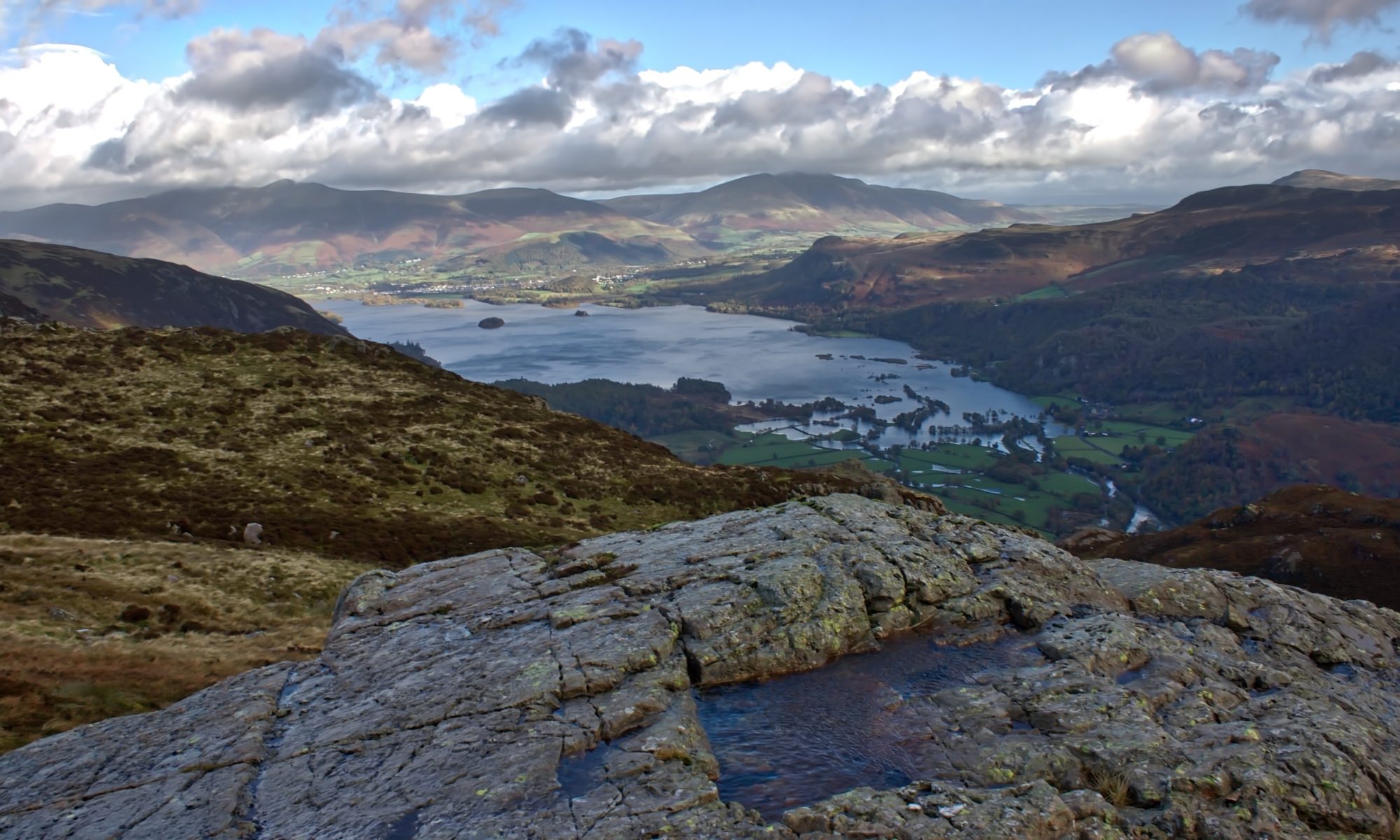 I wanted to post a photo of Castle Crag today, the smallest Wainwright, but I couldn’t find a decent image, just a long-range shot from Swanesty How near Grange. Instead, I found this photo of Derwentwater taken, by coincidence, on the same day as my photo of Honister Pass posted four days ago. It actually shows how high the water level was on the day after the great storm of October 2008.

Castle Crag would be directly below me on the right. It’s a wooded hill that has been heavily scarred by quarrying but it also contains a cave that was, in the early 20th-century the ‘home’ of an eccentric hermit called Millican Dalton. A colourful character, he styled himself a ‘Professor of Adventure’ and guided tourists in what we would call today ‘outdoor pursuits’ such as rock climbing, raft building and sailing here on Derwentwater.

He was born at Nenthead, ended up in London working in a shipping office, and then give it all up at the age of 30 to live on a small plot of land in Essex. That didn’t last too long and he began to migrate to the Lakes in the summer living in a tent, then returning to Epping Forest in the Winter, to live in a hut. He had a tiny income which he supplemented by making tents and rucksacks. It started to lead climbing tours to Lake District, Scotland and the Alps and, in 1922, he moved into his cave on Castle Crag.

Dalton was teetotal, a vegetarian, and a Quaker, and “made his own clothes and equipment, very strong and efficient, entirely of his own design, toning with the fells. But whether from choice or a streak of laziness … they were never quite finished, the edges remaining unhemmed. A red plaid added colour, and was put to innumerable uses. A slouch hat always bore pheasant’s feather. Bright blue eyes sparkled in a permanently tanned face, and a pointed beard was slightly grey even then.” This according to Mabel Barker in his obituary, recalling when she first met Dalton in 1913.

Millican Dalton died in 1947 aged 80, active to the end. Mabel again: “He had, I think, early worked out a theory of life for himself, and if ever anyone did so, he lived up to it consistently and completely. He had found something, and was well content with it. Into this union and practice of life, climbing fitted as a natural part. He did things on the rocks, as everywhere else, to please himself, but not for self-seeking; to fit in with his theory of life, and of earth and his relation to it.”