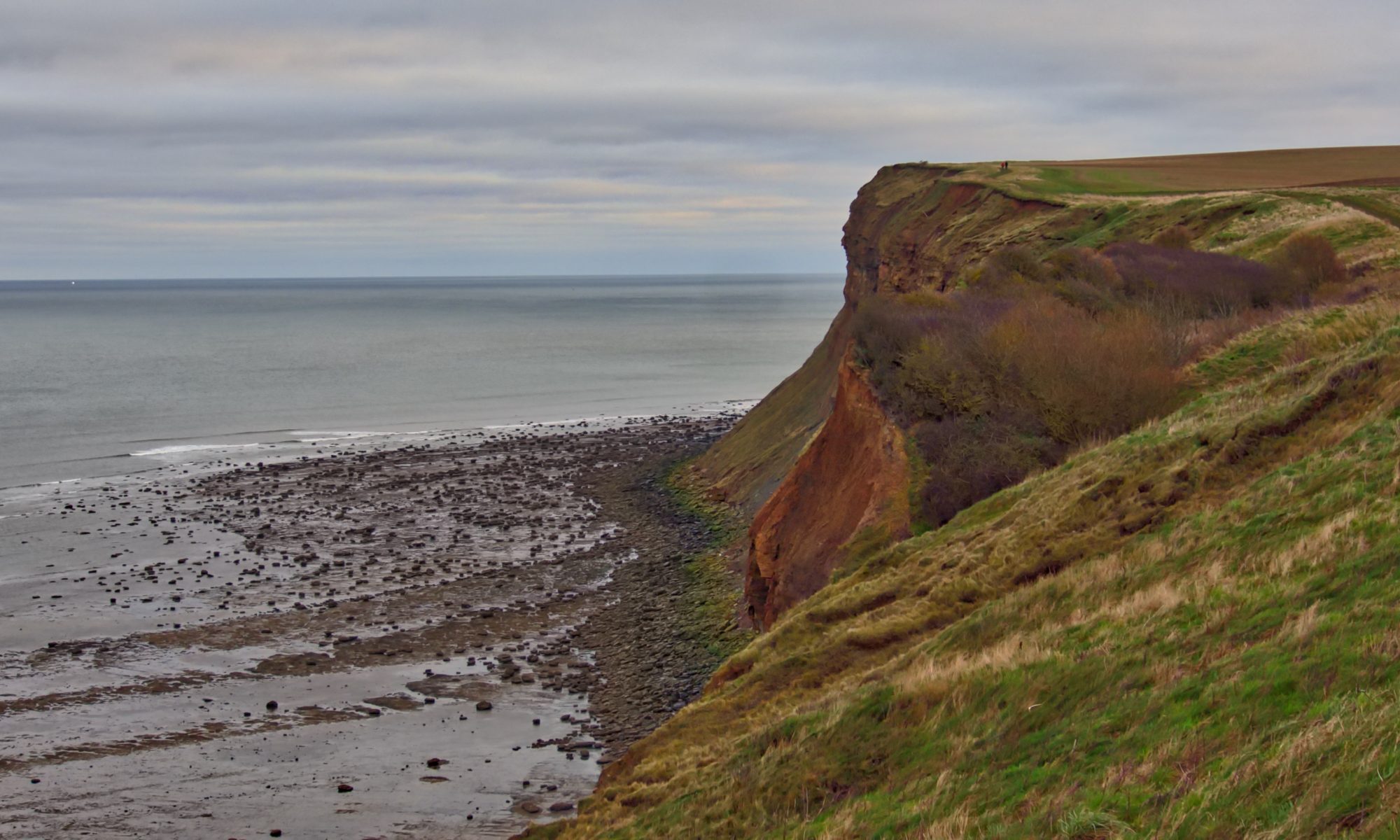 The prominent landmark east of Saltburn-by-the-Sea. An hour before low tide.

This was once the site of a Roman signal station which main purpose was to look out for pirates raiding settlements along the east coast. It comprised a stone turret 15-metre square with walls 2.3-metre thick suggesting it must have been quite a tall structure. The turret was surrounded by a further stone wall and beyond that a ditch giving an overall site plan of perhaps 60-metre square. When the site was excavated in 1911 only the shoreside of the turret remained, the rest having succumbed to the erosion of the cliff by the twice-daily action of the sea. The recession rate for Yorkshire’s cliffs is estimated to be about 4 inches per year, on average. And for the softer lower slopes of glacial till the rate is quicker at 10 inches per year. Today only one side of the defensive ditch remains. In the middle distance, the small re-entrant of scrub is mapped as Cranedale. I envisage this will soon give way. In fact, there was a posting on Facebook earlier in the week showing large cracks at the foot of the cliffs.

Such is the relentless gnawing of the sea. When the glaciers of the last ice age melted about 12,000 years ago the shore was perhaps ten kilometres or so away, the northern part of a great land bridge connecting Britain with continental Europe. A landbridge that archaeologists have called ‘Doggerland’ that was subsequently submerged by tsunamis during a period of undersea landslides along Norway’s Storegga continental shelf. About 8,000 years ago.

Now I have always thought that this ‘Doggerland’ was a modern theory but it seems such a landbridge was mooted way back in Victorian times. Writing in 1874 William Boyd Dawkins in his book “Cave Hunting” says:

“The identity of the British pleistocene (that is, almost the latest, from the geologist’s point of view) fauna (or catalogue of existing kinds of living creatures) with that of the continent, leads to the conclusion that in the said age Britain was connected with the adjacent countries by a bridge of land, over which the wild animals had free means of migration. And this might be brought about by a comparatively small elevation of the area concerned. It is known that Britain and Ireland constitute the uplands of a plateau now submerged to the extent of about 200 yards on the side of the Atlantic. On the east it extends at a depth of from 40 to 100 yards in the direction of Belgium; and on the south it is only sunk from 40 to 80 yards below the sea level . . . . Were this plateau elevated above the sea to the extent of 200 yards the British Isles would be united to the Continent;”
 Open Space Web-Map builder Code