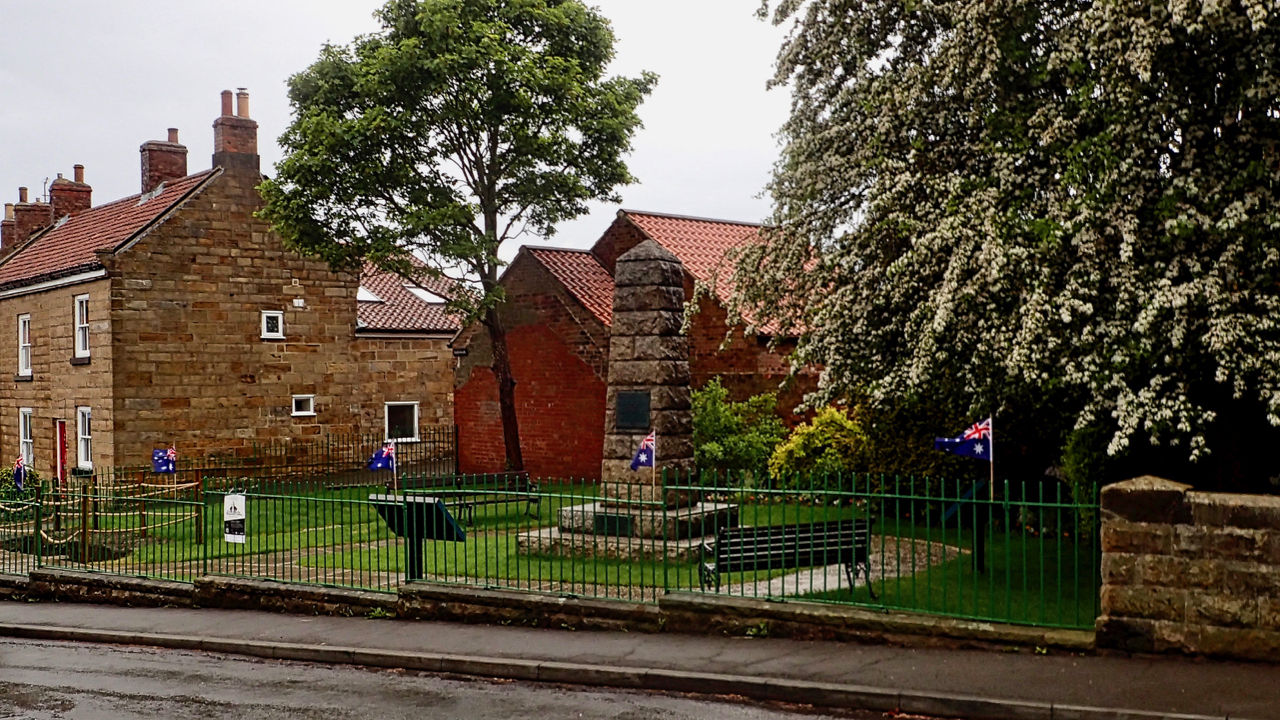 On 25 May, 1769, James Cook wrote in his journal “Most part of these 24 hours Clowdy with frequent Showers of rain”. Pretty much like the weather this morning in his home village of Great Ayton then, if a tad warmer. Cook’s ship the Endeavour was moored offshore Tahiti in preparation for his task of the measurement of the transit of Venus on 3 June.

Today’s photo is of the James Cook Memorial Garden in Great Ayton which has just been reopened following restoration. The obelisk and garden are on the site of the cottage of James Cook, the father of the famous explorer, and was sold, transported stone by stone and re-erected in Australia. During the restoration, the original footings of the cottage were found. There is no evidence that Captain James Cook, the son, actually ever stayed there.

It is 250 years since Cook made the first of his famous voyages and made his “discoveries”. Later this year the New Zealand government are planning on spending $20 million on commemorations to celebrate Cook’s landing at Tūranganui-a-Kiwa. However, some Māori are calling for a boycott calling him a diseased, kidnapping, murderous, thieving invader. Stan Grant, an Indigenous Australian broadcaster, has written: ‘Surely we need no longer maintain the fiction that he “discovered” this country. It dishonours the people who reached this continent 60,000 years before Cook.’

I think this is very harsh. It’s naive to interpret history through modern eyes. Cook was a Naval officer, from a farming family, and would have been duty bound to carry out his orders which included:

“You are also with the Consent of the Natives to take Possession of Convenient Situations in the Country in the Name of the King of Great Britain:”

Of course, ‘consent’ is open to much interpretation, it gave Cook a great deal of flexibility but that discussion is perhaps for another posting as is the diseased, kidnapping, murderous and thieving allegations. Let’s stick with discovery.

The right of Cook’s superiors, the British Crown, to order him to take possession of countries originated in a series of 15th-century Papal bulls or decrees known as the Doctrine of Christian Discovery by which ‘Christian’ explorers were allowed to claim ownership over those who were living in ‘non-Christian’ lands. Thus Cook, as the Crown’s representative, was able to claim Australia and New Zealand under this doctrine, hence he is referred to as the ‘discoverer’ of these lands.

This doctrine is still in existence. It has not been condemned by the Pope. In 2012, the UN reported that:

“the Doctrine of Discovery had been used for centuries to expropriate indigenous lands and facilitate their transfer to colonizing or dominating nations, speakers in the Permanent Forum on Indigenous Issues stressed today, urging the expert body to study the creation of a special mechanism, under United Nations auspices, to investigate historical land claims.”
 Open Space Web-Map builder Code