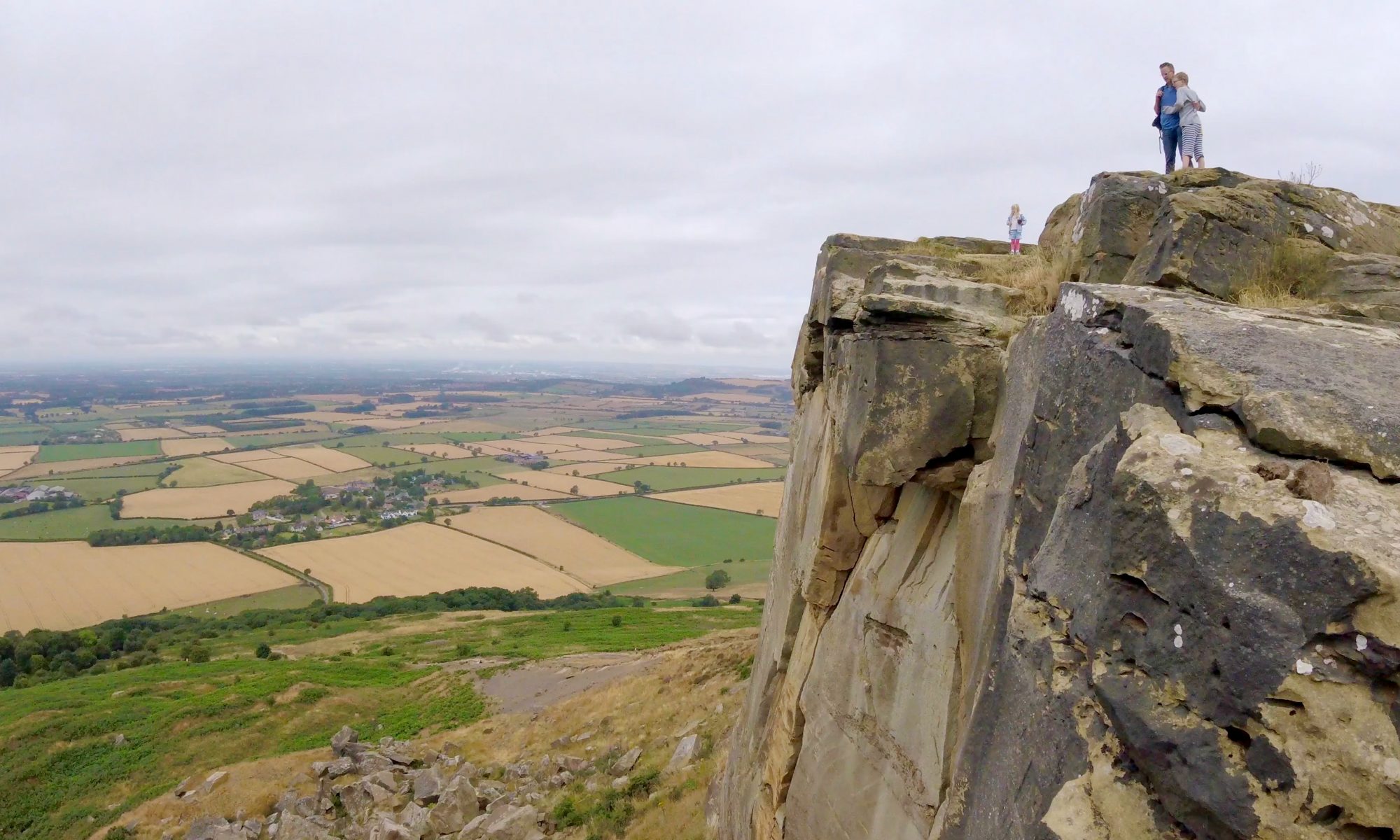 A rather unusual view of the summit crag, the result of playing with a GoPro on a selfie-stick.

The rock face is not as vertical as I remember but that may be due to an optical illusion due to the wide angle lens.

The sandstone crag looks good but is considered unstable by the climbing fraternity. It seems to be still lichen free even after being exposed for 120 years since the rockfall, although the face between the two cracks seems to be ‘newer’ than the remainder — a more recent rockfall perhaps?

I wonder how many people who peer over the edge of that topmost boulder appreciate how much it is overhanging.

There was once a hermitage on the summit and a narrow gap between two rocks called St. Winifryd’s Needle. From a document dated around 16001From a letter by ‘H. Tr.’ to Sir Thomas Chaloner (so possibly from around 1600?), printed in v2 of the Topographer and Genealogist, 1853. Available online at https://archive.org/stream/topographergenea02nich#page/408:

“That is for shappe, scyte, and many raryties, more excellent then any that I have seene; yt hath somtymes had a hermitage on yt, and a small smith’s forge cut out of the rocke, together with a clefte or cut in the rocke called St. Winifryd’s Needle, whither blynde devotyon led many a syllie soule, not without hazard of a breaknecke tumblinge caste, while they attempted to put themselves to a needlesse payne creepyng through that needle’s eye.”

There is a Wilfrid’s needle in the crypt of Ripon Minster which is said to test a woman’s chastity2Brewer’s Dictionary of Phrase & Fable, 14th Edition. Revised by Ivor H Evans. Cassell. 1993. Page 1178.. It has been suggested that Roseberry’s Winifryd’s needle served the same purpose3BURTON J.P., F.G.S., J.J. ROSEBERRY TOPPING IN FACT AND FICTION. CLEVELAND NATURALISTS’ FIELD CLUB—RECORD OF PROCEEDINGS 1920 – 1925, VOL.III. Part IV. Page 7..

Although there seems to be a definite recess cut into the summit rock, any trace of the hermitage and the needle have long been lost by either zealous quarrymen or the 1912 rockfall.