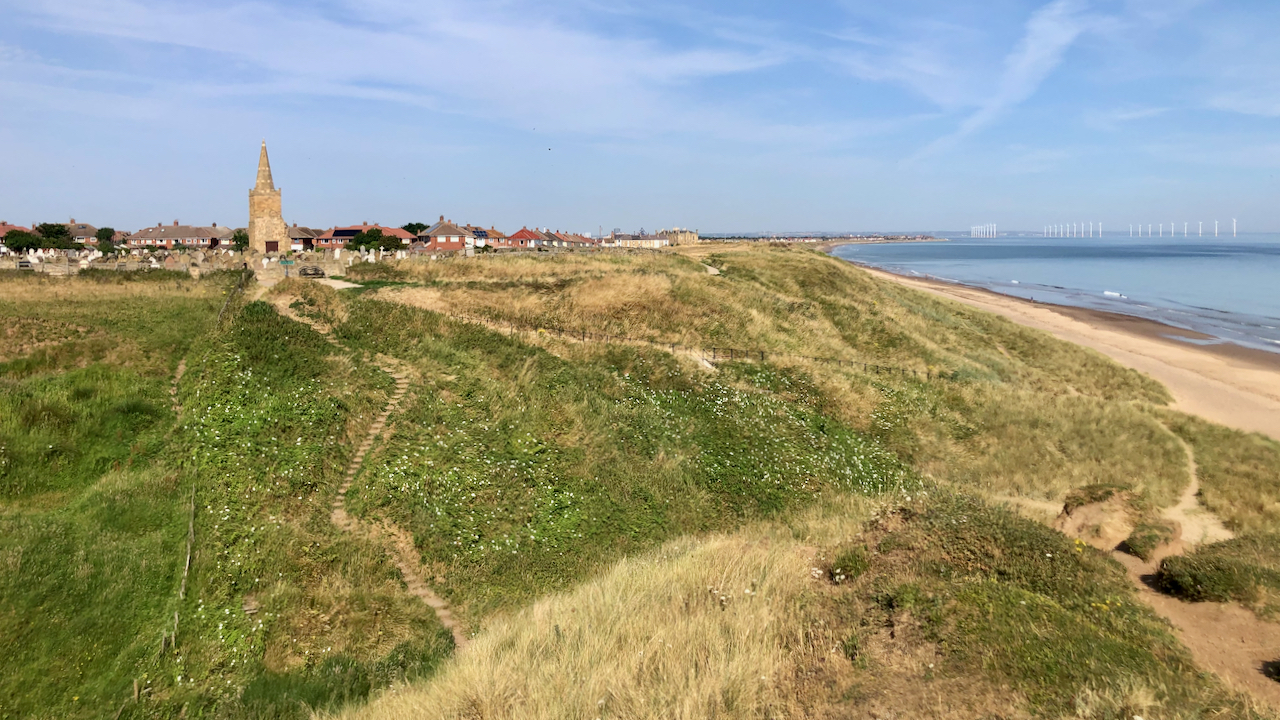 I came across a series of articles written in the Cleveland Standard during the 1930s/40 by a Hugh W. Cook of Redcar. They explore the history of ‘Cleveland’ and contain a wealth of information.

One article inspired a cycle ride through Marske this morning before the day became too hot. St. Germain’s steeple stands proud on the cliff tops, retained as a navigational landmark for the coastal waters.

I must point out that the historical facts contained have not been checked (a couple of odd things about the first paragraph).

Before the Norman the invasion of 1046[sic] and while the son of Ethelred still sat on the throne of England, William De Percy held the manor of Marske and had Brotton (then Broctune) and Upleatham tor neighbours One Normann[sic] also held “eight carucates of land here and four ploughs.”

Copsi, uncle of the infamous Earl Tosti of Northumberland, also held property at Marske years before the Conqueror brought his fighting hosts to England.

Let us see what Domesday Book says about this ancient little place. At that period the manor of “Mersche ” was valued at 10 shillings and the extract, which is written in Latin — is somewhat lengthy, which is evidence that at that period — 1080 — some 850 years ago — the place was one of importance.

The word Marske is derived from “Marish” or “Merich,” from the Anglo-Saxon “a pool” or “Marsh,” and apparently at the making up to Doomsday Book much of the land around Marske and Redcar was waste land.

When translated from the Latin the entry in Doomsday Book shows that William De Perci held 8 carucates of land (about 800 acres in “Mersche” and also had 15 vellanes (or farm labourers), five ploughs, two yoke of oxen, with ten acres of pasture land, the remainder being waste (or as Doomsday has it “terrae wastum.”)

With the arrival of the eager Norman hosts the Saxon owners had to give place to William’s friends and favourites, and if one held out an objection “off went his head.” This happened all over the country.

Therefore after the Conquest we find Robert De Brus or Bruce a Norman favourite of “King Willie” as the manor owner.

For many years this family held the manor until on the death the last De Brus without issue, in 1271 the inheritance became divided between the four sisters and then became the property Agnes De Fawconberge (one of the De Brus sisters).

In the reign of Henry VI the Conyers held Marske and in 1557 it to the Athertons who later conveyed it to the Penrymans. In 1662 the Lowthers purchased the estate, which eventually passed to the Earls of Zetland —the present owners [at the time of writing].

We can, therefore, trace the estate owners from the Saxon period, to the present day.

Curious to note, we find Marske appearing under different names on several occasions. In Saxon days it appeared as “Marsch,” while Doomsday has it as “Mersche” and “Mersc.” Later it appears as “Maresk” and “Mareski” and in 1660 as Marsk, the “e” having been recently added.

This multiplicity of names for one and the same place is a little puzzling, but it is a well-recognised maxim on tho interpretation of place names and names of local objects of antiquity, that the earliest form in which the name is found is most likely to give the clue to its meaning — thus “Marsch” (Saxon-Anglo).

The church — always a place of interest in all old places — and a key to the inhabitants — must next attract our attention. (I could write many pages about its history if only space would allow).

Curious to note we search in vain in Doomsday Book for “Ecclesia et Presbiter” (“Church and Priest “) at Marske.

There might have been a “church and priest” here in connection with Brotton, but if this was the case surely the vigilant eyes of the compilers of Doomsday Book would not have missed the church.

In spite of this we have it on fairly authentic evidence that in 1050 (30 years before Doomsday Book was compiled) the church of St. Germaines at Marske was dedicated in that year by Egelric, Bishop of Durham.

This is the first reference we get of Marske, followed in 1068 when Copsi gave 10½ carucates of land and the rectory near to Durham Cathedral, giving also a silver bowl to be preserved for ever as a perpetual memorial of the gift.

The first known “St. Germain’s” was probably replaced about 1150 by a fine Norman church which stood on the same site and was in constant use until 1821, doing duty for nearly 700 years.

The list of vicars goes back to 1160 and during that period there were 41 in all. The Vicar is the Rev. A. Waton.

The old Norman font dating back to about 1180, one of the finest of its kind in North Yorkshire. is now in the new church.

In 1822 this beautiful font was thrown out of the old church and for many years was put to the profane use as a cattle trough, later being used as a flower pot on the vicarage lawn until 1901, when it was restored. rededicated, and placed in St. Mark’s Church. In the church of St. Marks is a most beautifully carved ancient wayside cross, dating from about 1230. This was dug up in the sand about 30 years ago. There are only three like it in this country. The register books date back to 1569 and since that date alone, over 5,000 people have been buried in the old churchyard as records verify. There are 24 volumes of these Marske registers. These books contain the following simple entry: “April ye 1st, 1779, buryed thys day James Cook of Redcar.” This refers to the burial of the father of Captain James Cook (the celebrated circumnavigator), whose remains were buried near the northern door. Under the chancel is the vault of the Dundas family, where many members were buried.

All records of deaths, marriages with Redcar were kept at Marske Church until 1829, there being no church or burial ground at Redcar until that date.

The old tithe barn. which is the property of Lord Zetland, who is still lay reader of the parish, dates back over 200 years, and the tithes are several times mentioned in the old parish registers of the church.

The history of the old hall at Marske is interesting as the original mansion links it with the fourteenth century. The present hall is an elegant mansion in the Jacobean style, and was erected about 1650. It the residence of the Dowager Marchioness of Zetland, a charitable, kind-hearted lady, who does much for the people of Marske and surrounding district. In her younger she was always known as the “Beautiful Lady Lilian.”. She comes from the Lumley family who, for many years were lords of the manor of Kirkleatham, and one of the oldest titled families in the North.

Apparently the old hall dates back in the end of the fourteenth century — about 1390.

In an assignment of the dower of Dame Joan (the widow of Sir Thomas Fawconberge and lord of the manor of Marske), which was made at Skelton on October 20, 1408, we catch a glimpse of the surroundings of the older hall. This document refers to the extensive hall, orchards, gardens. etc., and mentions that this lady also had a share in the saltworks at “Ye Porte of Estcotum” (East Coatham), which at that period was in a flourishing condition, and employed many workmen, on the present Warrenby Marsh. At that time sea water was evaporated by means of fires made with local “sea coal” to produce salt.

We thus see that the historical, ancient Marske links us with the Saxon period, that without doubt it is one of the most interesting in North Yorkshire.