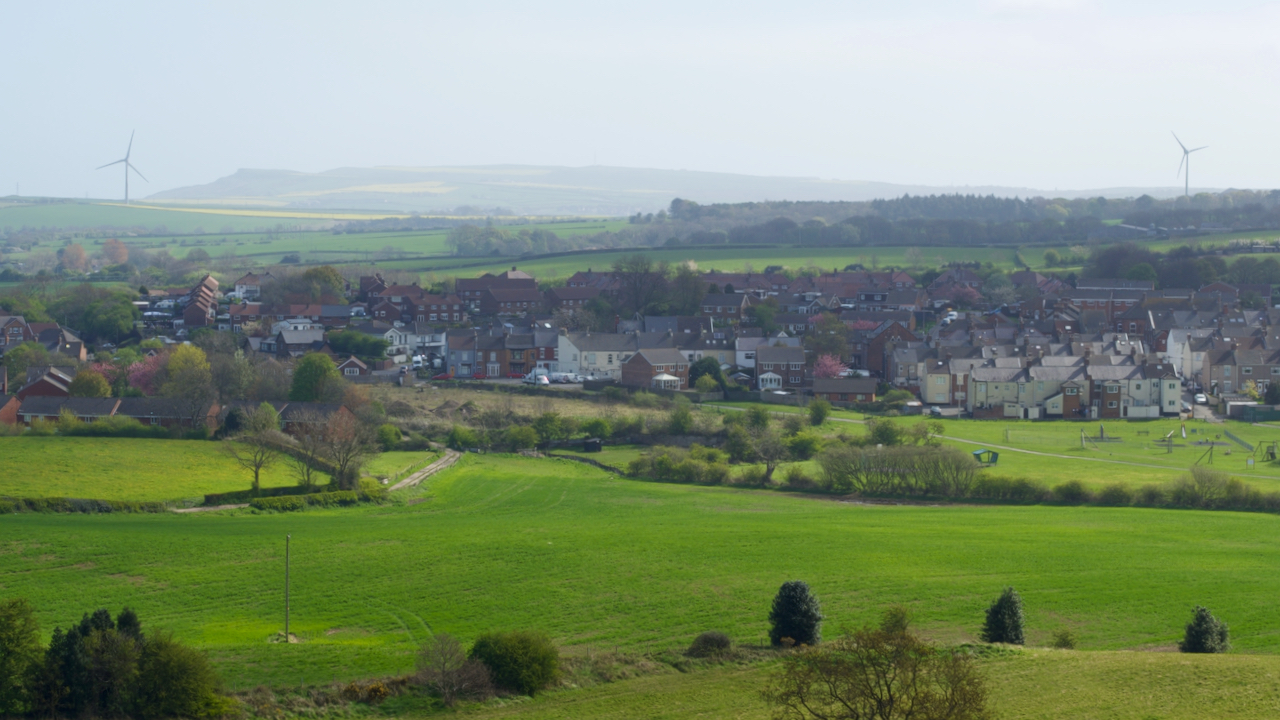 East Cleveland is a not so frequented neck of the woods for me, yet it is an area steeped in history.

This is Boosbeck, at the head of the Margrove valley, which Elgee insisted on calling the Boosbeck valley.

His reasoning? The valley originally drained east from the moors beyond Aysdale to Saltburn Gill. This was before the last ice age, when the North Sea glacier blocked the flow at Boosbeck causing the water to back up, eventually outflowing at Slapewath, thereby creating the gorge there1Elgee, F. Geological Notes. | Northern Weekly Gazette | Saturday 24 January 1903 | British Newspaper Archive. [online] Available at: https://www.britishnewspaperarchive.co.uk/viewer/bl/0003075/19030124/066/0007 [Accessed 16 Apr. 2022]..

Rock gorges such as this are a common feature in Cleveland, others are the Leven at Kildale, and the Esk at Crunkley Gill and Glaisdale.

But that is an aside. I didn’t explore Airy Hill to photograph geomorphological features.

My interest was more recent.

By 1872, when Stevenson, Jacques and Co. and T. Vaughan and Co. opened their ironstone mines, Boosbeck

The land owner was Christopher Jackson, a Brotton builder, who sold separate plots of land to individual builders to build houses for the miners and their families.  The houses were constructed to the builders own individual standard of a two-up two-down design — a somewhat piecemeal development with houses being built first with the roads and paths later by a private improvement scheme4Sherlock, Stephen J. “IRONSTONE MINERS’ HOUSES IN THE MARGROVE
VALLEY, CLEVELAND”. Page 96. Durham Archaeological Journal 10, 1994, 93- 103. Altogether not atypical in mining communities.

In August 1883, 17 houses were declared unfit for habitation. The situation worsened and three weeks later the gable end at the north of Gerrie Street collapsed on the very same day that labourers moved in to Carney Street to remove  woodwork from the roofs of the houses. The problems had been caused by the under-ground mine workings coming too close to the surface and affecting houses’ foundations.

By the end of the year, most of Boosbeck was now affected by problems caused by subsidence, 139 homes had been condemned as unfit for habitation and many more were seriously damaged. In February, 1884, seven residents took Jackson, and Stevenson, Jaques, and Co. to court to recover damages7The Land Subsidence At Boosbeck. | Daily Gazette For Middlesbrough | Monday 04 February 1884 | British Newspaper Archive. [online] Available at: https://www.britishnewspaperarchive.co.uk/viewer/bl/0000159/18840204/017/0004 [Accessed 24 Apr. 2022].. A complication was that Jackson, the landowner, undertook to indemnify Stevenson, Jaques, and Co. against claims for damages, thereby retaining control over the operations.

Boosbeck mine was 300 ft. deep, and the seam 18 feet thick. It was usual in mining operations to leave pillars to hold up the roof of the mine. These pillars were supposed to be 85 feet thick by 50 wide; but it was found that they had been driven through and cross cut, in order to get maximum the ore extracted.

It was found that Stephenson, Jacques, and Co. had mined a total of 133,704 tons, whereas the quantity should have been only 115,000 tons. The cross cutting of the pillars had weakened the support and roof.

It was alleged that Jackson had gone down the mine and, ignoring advise that pillars needed to be left to support the houses, said that he wanted the whole of the ironstone to be worked out and the pillars removed8The Land Subsidence At Boosbeck. | Daily Gazette For Middlesbrough | Tuesday 05 February 1884 | British Newspaper Archive. [online] Available at: https://www.britishnewspaperarchive.co.uk/viewer/bl/0000159/18840205/024/0004 [Accessed 24 Apr. 2022]..

On the 25 March, Jackson announced that he had “conveyed to Messrs Stevenson, Jacques, and Co. tho whole of his real leasehold and personal property situate in this and neighbouring counties and elsewhere in the United Kingdom, and that from this date they will receive all rents, royalties, and other moneys owing to Mr Jackson, and discharge his liabilities. This arrangement has been made in settlement of Mr Jackson’s liabilities under the various actions brought for compensation in respect of injury done to houses at Bcosbeck caused by the working of Mr Jackson’s mines, and will put an end to all litigation as to the liability of the joint defendants in the several actions“12The Land Subsidence At Boosbeck. | Daily Gazette For Middlesbrough | Tuesday 25 March 1884 | British Newspaper Archive. [online] Available at: https://www.britishnewspaperarchive.co.uk/viewer/bl/0000159/18840325/018/0004 [Accessed 24 Apr. 2022].. Damages were assessed by abitration.

The mine closed in 1887, the royalty becoming part of South Skelton Mine which was by now operated by Clay Lane Iron Company, T. Vaughan and Co. having gone bankrupt in 187813Tuffs, Peter. “Catalogue of Cleveland Ironstone Mines”. Cleveland Ironstone Series 1996..

A school has now been built on the site of the Boosbeck Mine.