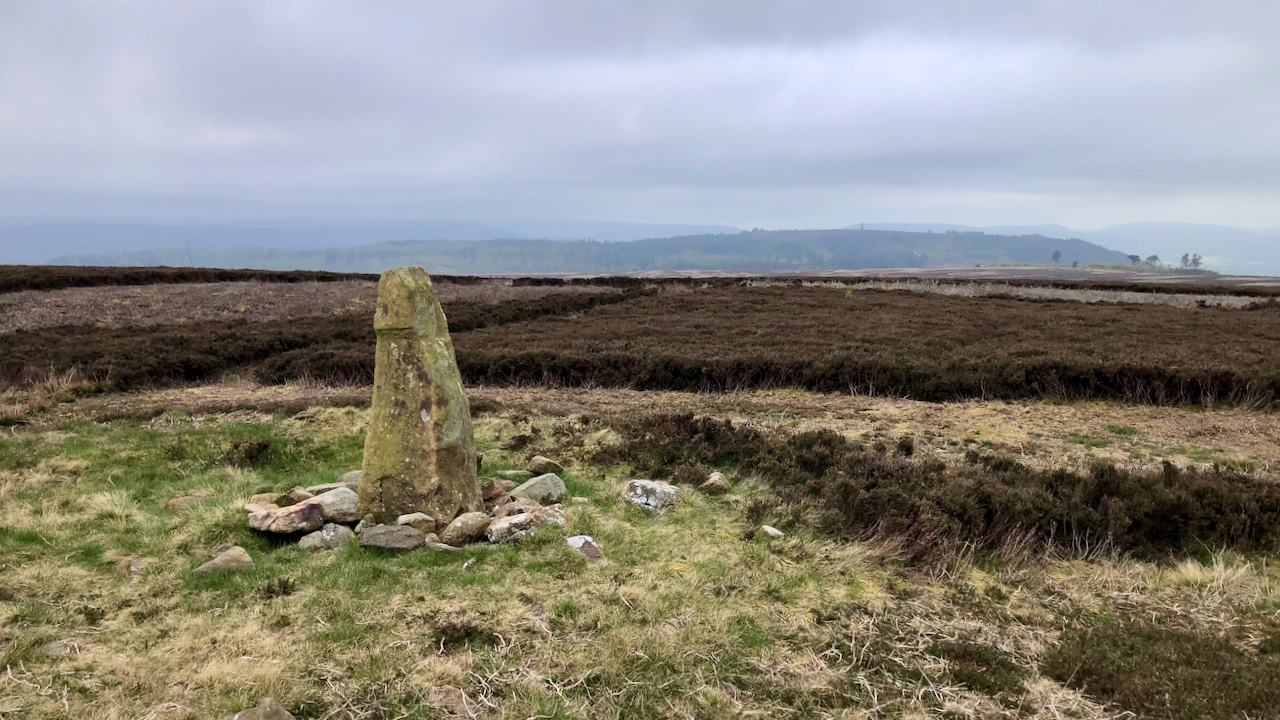 I don’t usually do this view — on a sunny day it would be into the sun — but, a bit cloudy today, and with a surprising chilly wind. From Great Ayton Moor.

On this day (23rd April) in 1605, Walter Calverley of Calverley Hall murdered his two sons, and seriously wounded his wife, and was on his way to murder his third son, an infant who was with his wet-nurse, when arrested.

He refused to enter a plea at his trial in York, thereby preventing his estate from being forfeited, and was sentenced to be pressed to death by having heavy stones placed on his chest until he suffocated.

The story of the murders led to a play, ‘A Yorkshire Tragedy’ which has been wrongly attributed to William Shakespeare. However, it is now thought the true author is likely to have been, Thomas Middleton, a contemporary of Shakespeare1A Yorkshire Tragedy. [online] Wikipedia. Available at: https://en.wikipedia.org/wiki/A_Yorkshire_Tragedy [Accessed 23 Apr. 2022]..

Calverley Hall is between Shipley and Pudsey, overlooking the River Aire. In the early-17th-century it had been the residence for six centuries of the ancient family of Calverley. The hall itself was probably built in the reign of Henry VII.

Walter Calverley, the son and heir of William Calverley, Esquire, married at the close of the 16th century Philippa, daughter of Sir John Brooke, by whom be had three sons, William, Walter, and Henry.

But before he was of age, he had been betrothed to marry Emily, but her father had asked him to wait six months until he had attained his majority.

Calverley reluctantly consented but within three weeks, it is said he broke the pledge he had made with Emily, and had fallen for Philippa Brooke, whom he married with improper haste.

Emily was evidently a forgiving woman, and when she heard of Walter’s betrayal she exclaimed, “I entreat of God to grant prosperous health and fruitful wealth both to him and to her, though I am sick for his sake.” She died not long after, seemingly the result of a broken heart.

He duly married Philippa who bore him three sons. However his extravagance and temper became uncontrolled. He soon frittered away his money and began to fear that his family would become destitute. He sold his wife’s jewels, and persuaded her to dispose of the rest of her dowry, for which she herself made an unsuccessful journey to London.

One day a visitor called from Cambridge, Calverley’s younger brother was security for £1,000, the forfeiture of which bond had caused the young man to be cast into prison.

Calverley asked the visitor to walk around the grounds of the Hall, while he should consider what to do. He came across his oldest boy, who was playing in the gallery.

Something must have snapped in his mind, Calverley fell upon his son and stabbed him two or three wounds with his dagger.

He picked up the bleeding child, and carried him to the room of his mother, who was asleep, while the nurse was dressing another of the children in the room. With a shriek of horror, she dropped to the floor. Calverley seized her and flung her downstairs.

By this time Phillpa had woken. She soon became aware of threat, and tried to save the second child from his fury, but he plunged the dagger into its heart, while still being held by his mother. His fury was then directed against his wife, and he stabbed her several times.

Calverley then ran downstairs, stabbing another man-servant. Rushing towards the stables, he came across the visitor who “expressed the hope that nothing unpleasant had happened“. He gave a reply, telling the visitor to go into the house. This he did, while Calverley mounted a horse and rode off for the village where his third son, a baby, was with his wet-nurse.

Calverley meanwhile  was thrown off his horse which galloped away. By the time he arrived at the wet-nurses house he was arrested.

On the following day he was taken before the magistrates of the West Riding, where he confessed his crime, adding, that “he had harboured the intention of killing his children for two years past“, and that “the reason that moved him thereunto was, for that his wife had many times heretofore uttered speeches and given signs and tokens unto him whereby he might easily perceive and conjecture, that the said children were not by him begotten, and that he found himself to be in danger of his life sundry times by his said wife.”

He was subsequently tried at York assizes, but refusing to plead neither guilty or not guilty, “he was adjudged to be pressed to death, according to which judgment he was executed in the Castle at York, the 5th of August, 1604.”

Before he died he begged for an interview with his wife, who had recovered from her wounds. This was granted to him. His son Henry succeeded to the estate which, by his father’s refusal to plead at his trial, had been saved from forfeiture.

The estate remained in the Calverley family till the year 1754, when Sir Walter Calverley, who took the name of Blackett sold the manor and estate to Thomas Thornhill, of Fixby.