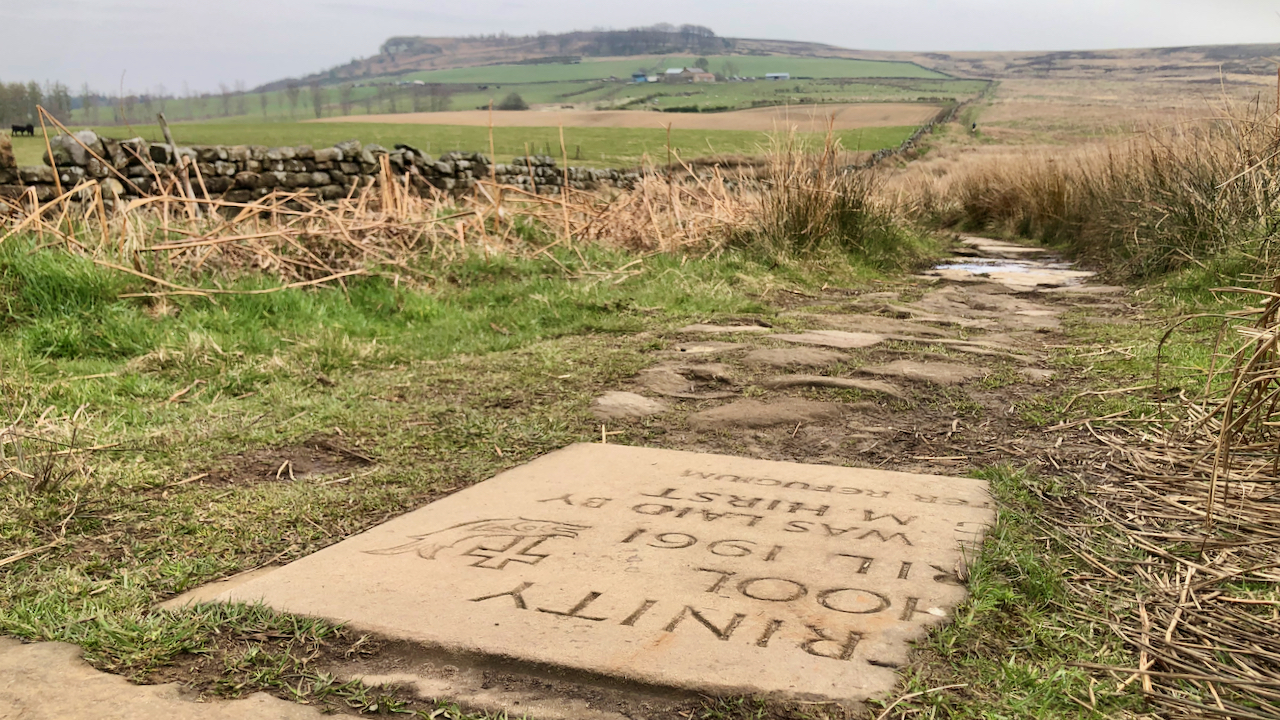 Walking along the Cleveland Way over Codhill Slack, I was reminded of a posting from 2015 when stepping onto this broken piece of flagstone.

I surmised then it was half of a foundation stone from the Holy Trinity Church of England Senior School in Halifax. Fifty metres or so further on is the other half.

With my new toy — access to the British Newspaper Archive — I thought I would do a bit of digging to see what I could turn up.

ONLY ONE OF ITS KIND IN THE DIOCESE

Clergy from many Halifax churches, and past and present pupils, were present at the ceremony, conducted among the bricks and mortar of the building site.

Speaking before the short service, the Bishop of Wakefield (the Rt. Rev. J. A. Ramsbotham) said the school, when completed, would be only school of its kind in the Diocese of Wakefield and from that point of view this was a significant moment.

“We believe that the traditions that will grow in this new school present will be as fine as the traditions of the old Holy Trinity School,” said Dr. Ramsbotham.

“A great deal will still be asked”

Referring to the ten-year-old Appeal fund, the bishop commented: “Since it is a secondary modern school, it has qualified for a grant from the Ministry of Education, which is by no means all the cost. To raise the money is something In which all the churches in Halifax are involved.

“Thanks to the leadership of the Archdeacon of Halifax, thanks to the enthusiasm of the vicar, the Rev. J. H. Rushworth, and members of the committee, past and present, and thanks to the response of countless people, we have been able to start and we shall be able to finish. But to do this, a great deal will still be asked from church people.

“The Church.” said the bishop, “will not do its money-raising by efforts which are not according to the church way of life. This means not so much money and not so easily as less challenging methods, but it does preserve that integrity which means far more in the end.”

The Appeal Fund stands at about £18,000. On top of this money, a loan has been obtained to enable work to go ahead, but a remaining total of £16,000 has to be raised over the next few years.

The school is scheduled to open In January of next year, and Savile Hall, the old school, will then be used to accommodate junior schoolchildren, after alterations costing £5,000.

The new school is situated just above the Roman Catholic School of St. Thomas More and just below the Halifax Technical High School. It will accommodate about 350 children.

Not quite 61 years ago. I haven’t been able to find when the building was demolished though.