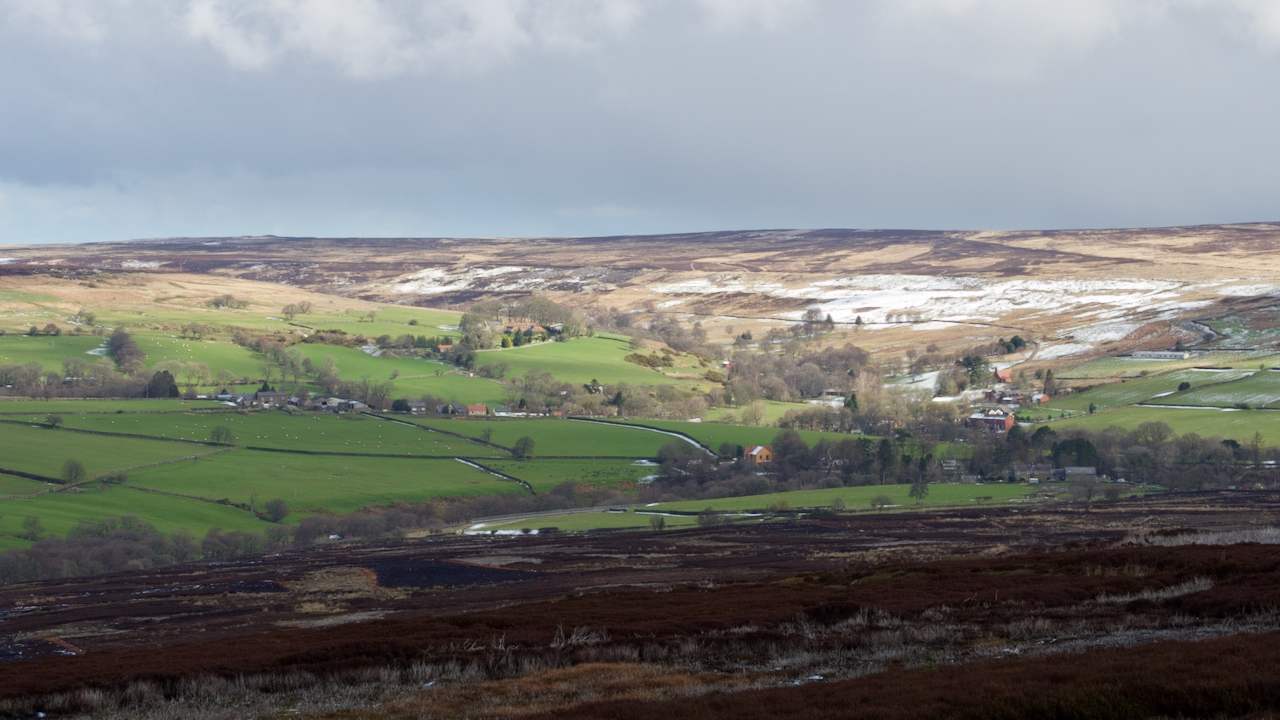 Kempswithin is a large expanse of heather moorland bound on the north by the Esk Valley railway and containing no Rights of Way; this latter fact reinforced by the abundance of signs that have been placed by the Kildale Estates advising “No Dogs | No Bikes | This is not a footpath or bridleway“.

Whilst this may be technically true — it may well not be a Public Footpath or a Public Bridleway — the moor is Open Access Land under The Countryside and Rights of Way Act 2000 ( CROW Act ). I consider the signs to be purposely deceptive, designed to intimidate walkers and runners to keep off the moor.

At 293 m above sea level, the high point is named Pike Howe, a Bronze Age round cairn, within a prehistoric landscape of cairnfields, field systems, and other funerary and settlement features1North York Moors HER Records Nos: 28/2505/7703/8304..

And it provides unusual views of Commondale to the north, Esk Valley to the east, and Westerdale to the south.

According to Atkinson, milk-stealing was a common offence in the centuries before he became vicar at Danby, citing the Quarter Sessions Records.

Before the Enclosure Act, the cows of all the villagers would have been pastured together in a common field and no doubt there was a temptation for dishonest milking.

Detection of illicit milking would be difficult and many cases of apparently mysterious failure of milk would then be alluded to witches often using their powers of shapeshifting.

The Reverend recounts the story of “Au’d Mally“, a witch from Commondale:

The scene was laid in Commondale, part of which valley lies in this parish and part in the parish of Guisborough. A farmer there was perpetually finding that his cows gave very much less milk to the milker’s fingers than they ought; and the loss became so considerable that it was deemed necessary to try and put a stop to the cause of it. There were witches galore in the neighbourhood, and their well-known nefarious practices in the way of diverting the flow of milk from the right channel were also only too well known. But how to discover if this were the right explanation of the loss complained of, and, if it were, how to obviate its continuance, were both matters the solution of which was not unattended with difficulty. In the issue it was settled that the best and most feasible plan would be to watch the field in which the cows were turned out to pasture during the night, and to take further means or measures according to the result of the watching process. Accordingly the farmer set a trusty hand to keep the necessary watch. An uneventful night, a second, a third passed. The sentinel declared nothing had passed into the field, the cows had never been approached by a soul, and least of all by crone or maid with pail and stool complete. And yet the morning meal of milk was as deficient as ever, there being nothing in the condition of the cows, or in the circumstances of the pasture, or what not, to account for the vexatious fact. At last one of the neighbours, “mair skeely ‘an t’ ithers,” or perhaps, like the Westerdale yeoman, a little more suspicious, on cross-examining the watcher, elicited the fact that it was not quite accurate to say that nothing whatever had gone into the field where the cows were pasturing, for that each night he had noticed a hare that came in through a gapway in the dike, and that seemed to be feeding about, and mostly right in amongst the cows where they were feeding or standing the closest together. Asked whether the hare always came from the same side, and entered the field through the same broken way, he answered, “Ay, for seear (sure), and wherefore not? Hares allays gaed the seeam gate, as a’ folks kenned.” But the said gap happened to be on the side that was handiest of access to a certain “Au’d Mally,” who had an uncanny reputation, and the “skeely” (or perhaps suspicious) neighbour suggested that “Au’d Mally might lik’ly ken whilk weea t’ milk gaed.” Hereupon followed another deliberation, the upshot of which was that the farmer himself should watch the next night, armed, and with his gun loaded — not with leaden pellets, but — with silver slugs ; and as it was not easy to come by silver slugs in an out-of-the-way place like Commondale, — and besides that, it was highly expedient to keep their plans as quiet as possible, which could not be if they went to a town to buy such ammunition, — it was resolved to cut up an old silver button or two, and charge the gun with the pieces. Well, all was duly done according to programme; the farmer, with his “hand-gun” charged according to rule, took up his position near the gap aforesaid, and in such a place that, while he was well concealed himself, he could have a good sight of the hare as she entered, and also of the pasturing cows ; for he did not want to ” ware ” (expend) his costly charge on a mere ordinary long-eared pussy, but wished to catch ” Au’d Mally ” — if it were she — flagrante delicto, and shoot at her in the very act. Midnight passed and nothing came; but as the small hours drew on the hare was seen approaching with stealthy step, and sitting up on her haunches every minute or two to listen for suspicious sounds, as natural as life. With sheer expectancy the farmer’s heart began to beat much faster than usual, and the palpitation did not decrease when, just at the verge of the gap, it stood up again and glowered at the very spot where he lay concealed. Apparently reassured by the stillness, pussy resumed her leisurely advance, and entered the enclosure; but instead of approaching the feeding cows, she came deliberately on with direct course to the farmer’s ambush, her eyes getting bigger and bigger with each lope she took, until almost upon the startled watcher, when she reared herself up, growing taller and taller, and “wiv her een glooring and widening while they war as big as saucers,” and with their glare directed full upon the terrified skulker the form stalked straight up to him ! With a scream of utter, horrified terror, he sprang from his hiding-place, flung his gun far from him, and rushed headlong away, “rinning what he could,” and never halting even to draw breath until he had got himself safely within his own door, and doubly locked and bolted it. And so ended that attempt to bring the milk-stealing witch to book ; and certainly hardly either to her complete discomfiture, or even to her complete conviction.