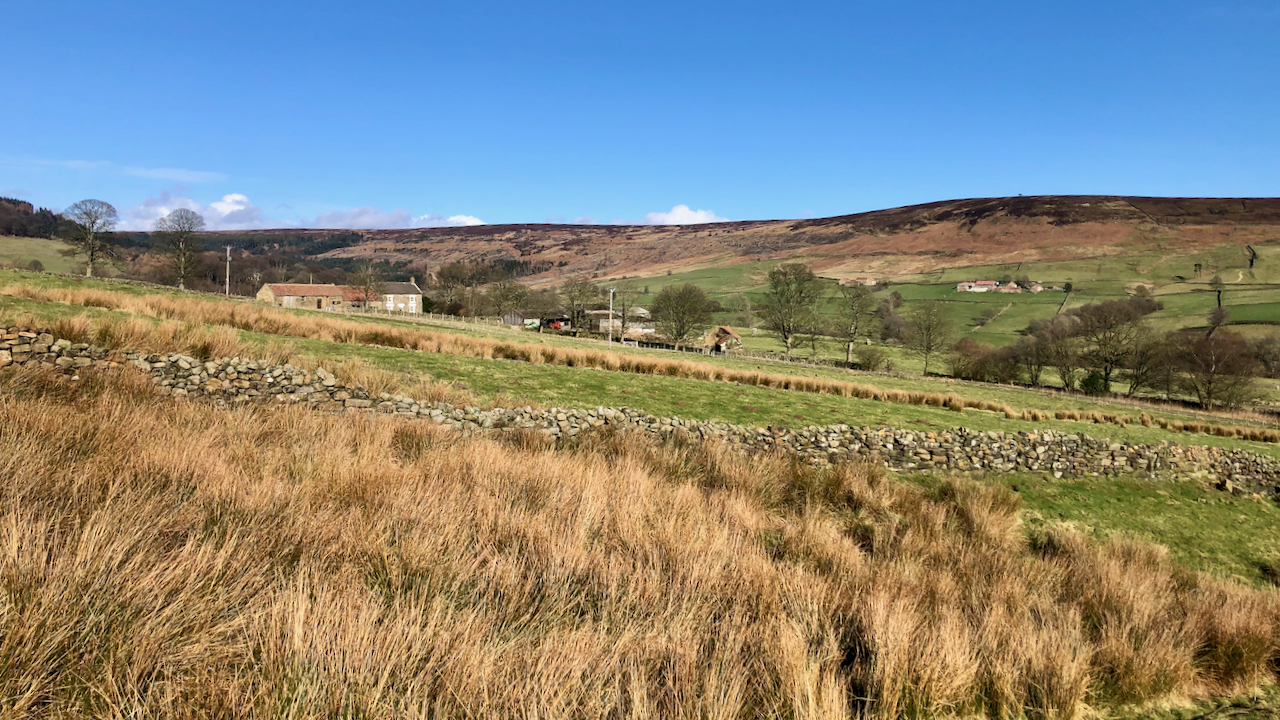 From a snowstorm to bright sunshine, Bransdale felt all seasons today.

I have been doing some repairs to dry-stone walling on the west side of the dale. It’s quite rare to view Bransdale from this angle. The nearest farm is Colt House, and, across the valley, are Cow Sike and Toad House. Between them, hidden beside Hodge Beck is Bransdale Mill.

Sir Hebert Read’s favourite walk was along the beck to Bransdale Mill which he described as his “spiritual hermitage, the ‘bright jewel’ to which I often retire in moods of despair”1Speakman, C. (n.d.). Sir Herbert Read. [online] Available at: https://www.nyma.org.uk/_webedit/uploaded-files/All%20Files/History%20Tree/36%201968%20Sir%20Herbert%20Read.pdf [Accessed 24 Feb. 2022]..

Herbert Read was born in 1893 at Muscoates Grange Farm, four miles south of Kirkbymoorside. When he was still a child, his father died and his mother had to move to Leeds, with Read attending school in Halifax. His studies in law and economics at Leeds University were interrupted in 1914, when war broke out.

He obtained a commission in the Green Howards, earning both the Distinguished Service Medal and Military Cross. After the war, he continued his writing and poetry, worked in a bank, the civil service, as curator of the Victoria and Albert Museum, Professor of Fine Art at Edinburgh, and editor of the Burlington Magazine. He co-founded the Institute of Contemporary Arts and was President of the Society for Education in Art.

Read became an outspoken pacifist during the Second World War. He was knighted in 1953.

In later life, Read was drawn back to the North York Moors continuing to write books and poetry about his recollections and current thinking. He died in 1968 and is buried in St Gregory’s Minster, Kirkdale.

A soldier passed me in the freshly fallen snow,
His footsteps muffled, his face unearthly grey:
And my heart gave a sudden leap
As I gazed on a ghost of five-and-twenty years ago.

I shouted Halt! and my voice had the old accustom’d ring
And he obeyed it as it was obeyed
In the shrouded days when I too was one

Into the unknown. He turned towards me and I said:
`I am one of those who went before you
Five-and-twenty years ago: one of the many who never returned,
Of the many who returned and yet were dead.

We went where you are going, into the rain and the mud:
We fought as you will fight
With death and darkness and despair;
We gave what you will give-our brains and our blood.