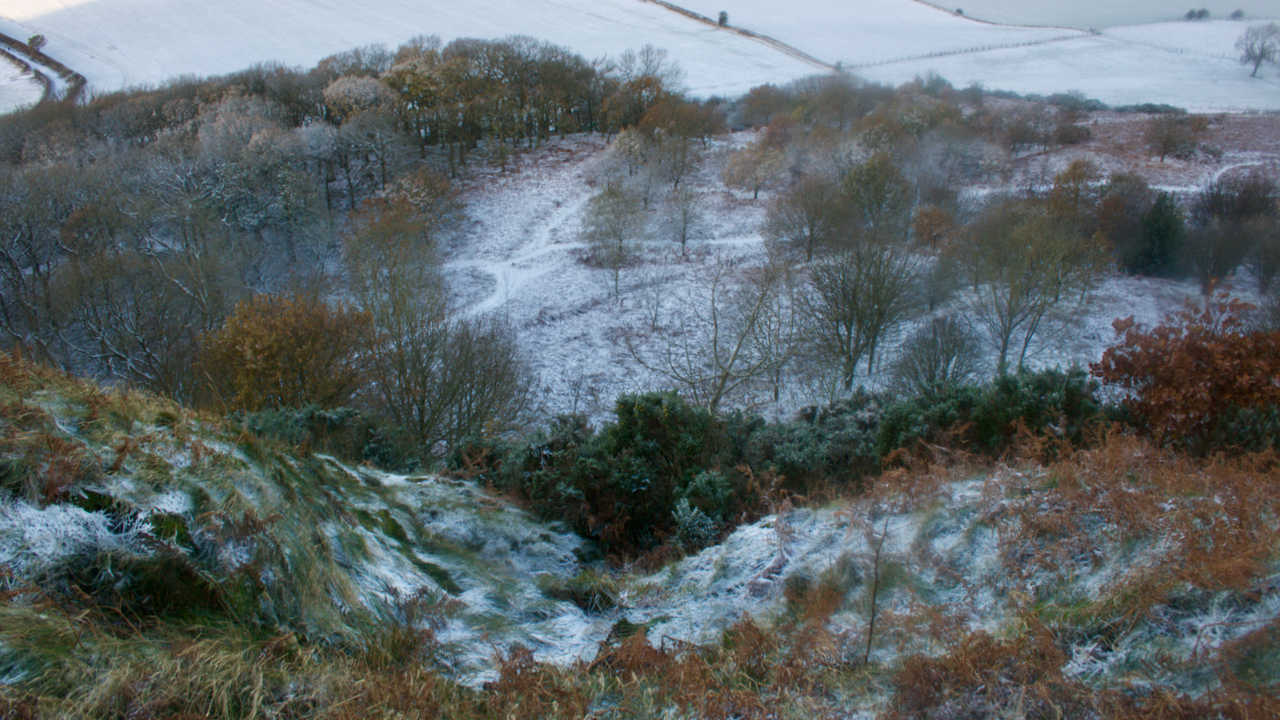 I’ve had my eye on this photo for some time, but either the view is dull looking from this way or very contrasty the other with Roseberry silhouetted.

It’s taken looking down Cockle Scar, Roseberry’s steep skirt of Staithes Sandstone Formation on its western side. This morning, a sprinkling of overnight snow puts some depth into the shot.

The interest is the gully, the small re-entrant, up which is the route of the actual Public Footpath; from the meeting of the paths below, just left of centre.

By the early 1990s, Roseberry was noticeably suffering from an increased footfall. Thousands of visitors climbing this iconic hill was causing immense erosion.

In September 1993, work began on a new zig-zag path which avoided the Right of Way by diagonally climbing the scar and cresting it 200 metres further south. A helicopter was used to airlift 200 tonnes of sandstone in polyester bags for the new path2Newcastle Journal – Saturday 18 September 1993. The stone was reused from an old stonewall in Kildale3“Roseberry Topping”. Great Ayton Community Archaeology Project. Page 180. 2006 ISBN 978-0-9554153-0-2..

The work was carried out by the Cleveland County Council in conjunction with the North York Moors National Park and the National Trust. The cost of £30,000 was met by the Countryside Commission4“Roseberry Topping”. Great Ayton Community Archaeology Project. Page 180. 2006 ISBN 978-0-9554153-0-2.. This included the helicopter airlift which took a day and cost £5,000. A Margaret Thomas, of the Cleveland Way project, said the path should last for 100 years5Newcastle Journal – Monday 14 February 1994.

Not quite thirty years later, Roseberry is again suffering from the many feet. In 2015, just short of 100,000 people made the climb from Newton — obviously this doesn’t include climbs from other directions. By 2019, the number had reached 145,00062019-20 North York Properties Engagement Report. Page 12. National Trust. [online] Available at: https://myvolunteering.nationaltrust.org.uk/South-of-Tyne-Portfolio/file/email-attachments/2019-20-Report.pdf?erid=37e24a69-ed8e-41a1-aaef-43780202f48 [Accessed 2 Dec. 2021]. Covid is expected to have contributed to further dramatic increases in visitor numbers.

But the good news is that, with contributions from the public and Sky Zero,  funding has now been raised to repair the eroded path up Roseberry7Out and about … (2021). Sunday morning climbing Roseberry. [online] Available at: http://www.fhithich.uk/?p=26140 [Accessed 2 Dec. 2021].. I hear the tendering process is underway. Watch this space.

I have also heard — now this may or may not be true, and I am guilty of spreading gossip — that the National Park have refused to contribute because the existing footpath does not follow the Right of Way.