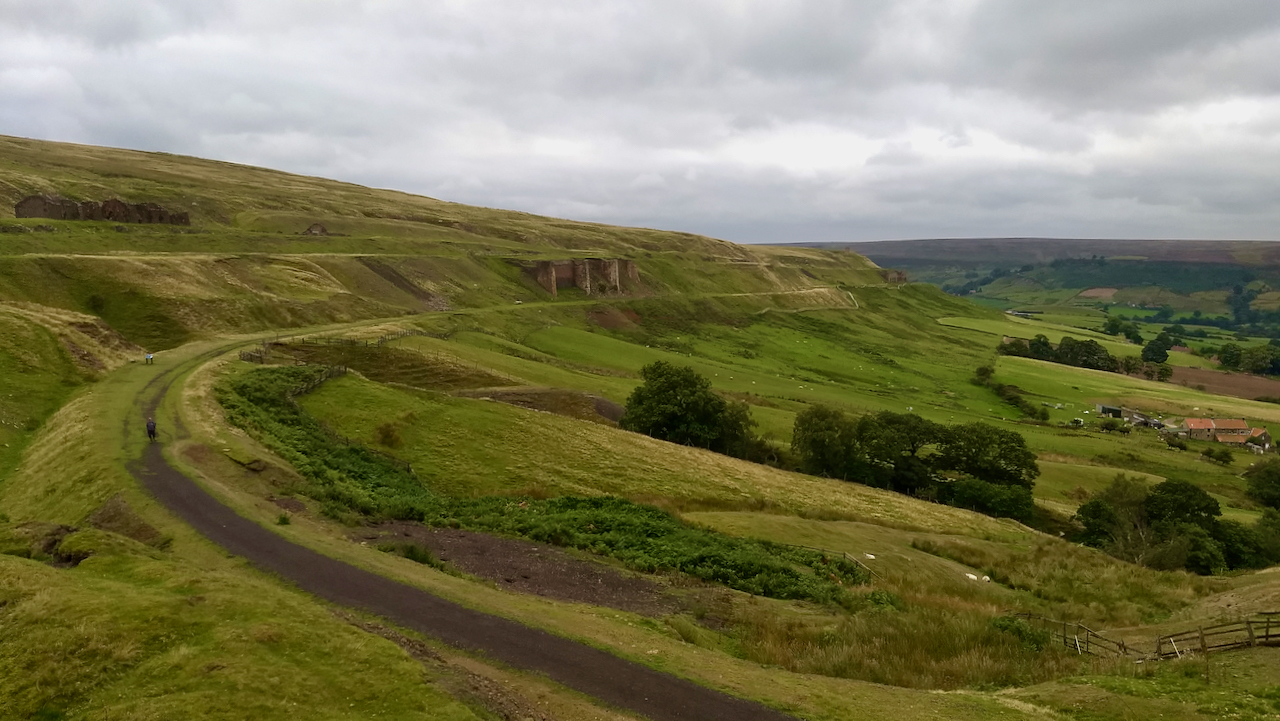 The great sweep of the old railway track as it descends to the calcining kilns of the Rosedale East Mines. The gradient at this point is about 1 in 60. The line continues to terminate at the goods depot and coal yard at Low Baring.

On the extreme left of the featured image are the ruins of a range of miners’ cottages called High Baring. I guess there would have been about two dozen cottages ‘L’ shaped arranged back to back with the fireplaces occupying the dividing wall. In the distance is another even more ruinous range for workshops.

It would have been a harsh existence, surrounded literally both sides by either the railway or a tramway,  and with the constant smell and smoke from the calcining kilns.

In 1873, a total of 1000 men were employed at the Rosedale Mines so the cottages at High Baring would have only housed a fraction of the workforce1‘GREAT STOPPAGE OF WORK IN THE CLEVELAND DISTRICT’ (1873) York Herald, 24 May, available: https://link-gale-com.ezproxy.is.ed.ac.uk/apps/doc/R3211121746/GDCS?u=ed_itw&sid=bookmark-GDCS&xid=18059bec [accessed 29 Aug 2021].. In May of that year virtually the whole of Cleveland ironstone miners were laid idle as a result of a dispute for an increase of 2d per ton of ore extracted2‘THE NORTH OF ENGLAND IRON TRADE.-THE CRISIS IN CLEVELAND’ (1873) Daily News, 26 May, available: https://link-gale-com.ezproxy.is.ed.ac.uk/apps/doc/Y3203053857/GDCS?u=ed_itw&sid=bookmark-GDCS&xid=61a62dd3 [accessed 29 Aug 2021].. Rosedale men were somewhat fortunate in that they were on half time, but nevertheless it would have been a lean year.

By then the east mines had been operating for eight years and the mining families were integrated into the life of the dale. At the 3rd annual Rosedale and Hartoft Agricultural Society show held in August 1873,  High Baring’s men took several of the ‘Special Prizes’ (which I guess means non agricultural or horticultural)3‘AGRICULTURE’ (1873) York Herald, 23 Aug, 4, available: https://link-gale-com.ezproxy.is.ed.ac.uk/apps/doc/R3211122432/GDCS?u=ed_itw&sid=bookmark-GDCS&xid=a5a679b0 [accessed 29 Aug 2021]..

In a prize “for wood or stone carving, mat making, netting, drawing, painting, modelling, or designing of any description, done by a miner in his leisure hours in Rosedale” we have:

Isaac Cudmore also won 3rd prize “for the best useful work of art“. However he was not as prolific as Miss Bimby though from Rosedale Abbey who won “Best specimen of darning“, “Best put in patch“, “Three buttonholes“, and for her “Specimen of cowkeeper’s butter“.

Anyway, this shows that the miner’s life was not all hard work, beer and tobacco.

By the autumn, there were some grumblings in the air. In October, “A Rosedale Miner” has cause to write to the “Miners’ Advocate and Record” complaining of the monopoly on the two local company owned shops let to one man at a very high rent with a guarantee that no other shop selling the same wares shall be allowed. He calls them “tommy shops“4‘A Complaint from Rosedale’ (1873) Miners’ Advocate and Record, 11 Oct, 2, available: https://link-gale-com.ezproxy.is.ed.ac.uk/apps/doc/MUEPED736735947/GDCS?u=ed_itw&sid=bookmark-GDCS&xid=28122d3d [accessed 29 Aug 2021]..

The Rosedale Mining Company owned most of the village and leased out the other shops so this “guarantee” could be enforced. So “the tailor must only sell clothes made by himself, the boot maker boots made by himself, the newsagent must not sell his few grocery goods and sweets, the baker must not deliver flour nor sell anything but bread ; if they infringe on these regulations they will lose their shops, and there are not four houses here but what belong to the Company, and certainly not one that could be had for a shop.”

Another dispute brewing in late 1873,  concerns the “trickery” of the “checkweighman“. The checkweighman recorded the weight of each tub the gang of miners produced. At the end of the fortnight, he tells each man what pay he will receive but apparently “forgetting to deduct for powder, and other stoppages” which leaves the men short and aggrieved. They feel they are being conned5‘Trickery at Rosedale’ (1873) Miners’ Advocate and Record, 13 Dec, 2, available: https://link-gale-com.ezproxy.is.ed.ac.uk/apps/doc/EFWOWB003450451/GDCS?u=ed_itw&sid=bookmark-GDCS&xid=8f02a220 [accessed 29 Aug 2021]..