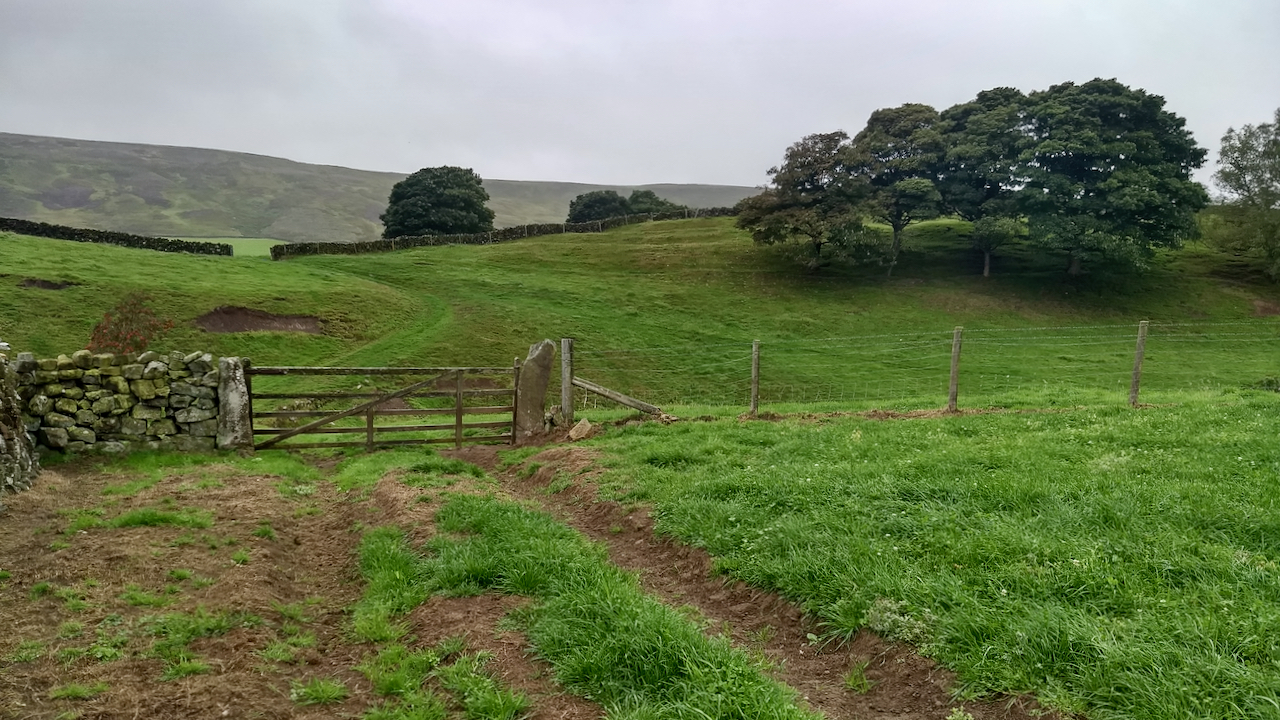 These Promontory Forts are generally located on the Cleveland and Hambleton Hills: Eston Nab, Roulston Scar, Boltby Scar, Live Moor. They date from the Late Bronze Age to the Iron Age, at various times in the millennium before the Romans came. Their position on the cliff edges and promontories suggest there primary purpose was defensive, a place of protection for a community at night and in times of emergency.

Round Hill is technically a mutivallate hillfort, which means having two or more lines of earthwork ditches. Although it’s on a hill, it is in the upper reaches of a spur of Westerdale and is surrounded by higher moors. It resembles a little brother to the well-known Maiden Castle in Dorset, and would have been clearly visible from within the surrounding dale. A high status residence and statement of local power.

The site is entirely on private farmland so an opportunity to visit was not to be missed. Like Maiden Castle, the best photographed would be from above using a  drone. Furthermore a band of trees covers most of the ditches. On the north east side these are discontinuous which can be partially explained by a staggered, more defendable, entrance.

The defences would be expected to have consisted of a series of imposing ramparts as well as the deep ditches. A palisade would have topped the ramparts. Today, there is no evidence of these ramparts on the inside of the ditches but the fortified area has been well ploughed over the millennia. This morning, a large bull and his cows and calves protected this central plateau. Within this fortified area there would likely have been dwellings, shelters for livestock and storage areas for food and weaponry. The site is located on the main ironstone seam and field walking has produced evidence of low temperature slag, a characteristic of early iron smelting.

No archaeological exploration has ever been done. A 16th-century document refers to the hill as ‘Burnt Oak Hill’. The same document also names the collection of farmsteads along the upper east side of the dale as ‘Trowsdale’. Both names have now been lost to history2Wilson, Carol M. “Westerdale: the origins and development of a medieval settlement”. ISBN 978-0-9565779-2-4 2013.