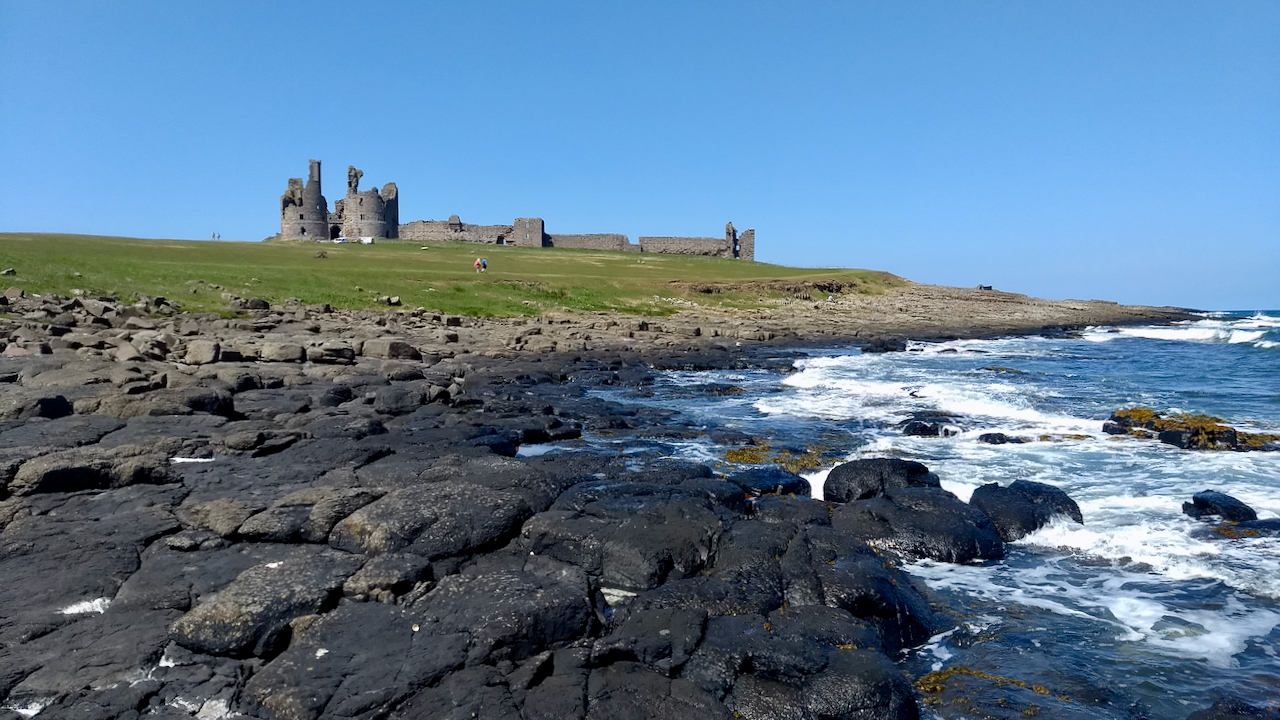 One stormy night, a brave and noble knight, Sir Guy, is riding along the coast and arrives at Dunstanburgh Castle on the Northumbrian coast. Suddenly the gates burst open to reveal a tall old man with a white beard and a halo of flames flickering around his bald head. Around his waist, there is a red-hot chain and he carries a staff of ‘burning iron’. He tells Sir Guy that a lady is waiting for him to rescue her, but warns that under no circumstances must he look at her.

Sir Guy boasts that he has no fear, and follows the wizard through dark passages to a winding staircase. A bell tolls slowly as he starts to climb and soon sobbing and whispering can be heard. At the top, there is a brass gate protected by a snake which the wizard paralyses. Behind the gate is a large hall paved with marble and lit by candles held by candelabra of dead men’s hands still dripping blood. In the centre is a crystal tomb, guarded by two giant skeletons and either side a hundred knights and their horses are asleep. In the tomb, Sir Guy sees a woman who seems to be whispering but he cannot hear her words. Sir Guy edges closer and snatches a glimpse of her and instantly becomes enchanted by her beauty.

The wizard points to the two skeletons one of which holds a sword, the other a horn. He tells Sir Guy that he must choose, either drawing the weapon or blowing the horn but not both. He takes the horn and blows it, at which the sleeping warriors awake to starts to attack him. He immediately grabs the sword but the wizard is furious. The last thing Sir Guy hears before passing out is a piercing cry. He wakes to find himself on the floor in the castle porch.

For the rest of his life, Sir Guy searched in vain for the stairway and another glimpse of his beautiful lady, and on stormy nights it is said Sir Guy can still be seen searching the ruined castle.

This local legend was first written down by the novelist writer Matthew Lewis, in his epic poem “Sir Guy, the Seeker” (1808). (See below for a full version but I have to admit I haven’t actually read it and am grateful for the synposis provided by Sophia Kingshill and Jenneifer Westwood in their book “The Fabled Coast“). Lewis was a contemporary of the Shelleys, Percy Bysshe and Mary, trading ghost stories whilst visiting them in Geneva. However, on the darker side, Lewis held sugar cane estates in Jamaica and so was the owner of more than 500 enslaved people. It was on the voyage home from visiting these estates that in 1818, Lewis succumbed to yellow fever and was buried at sea.