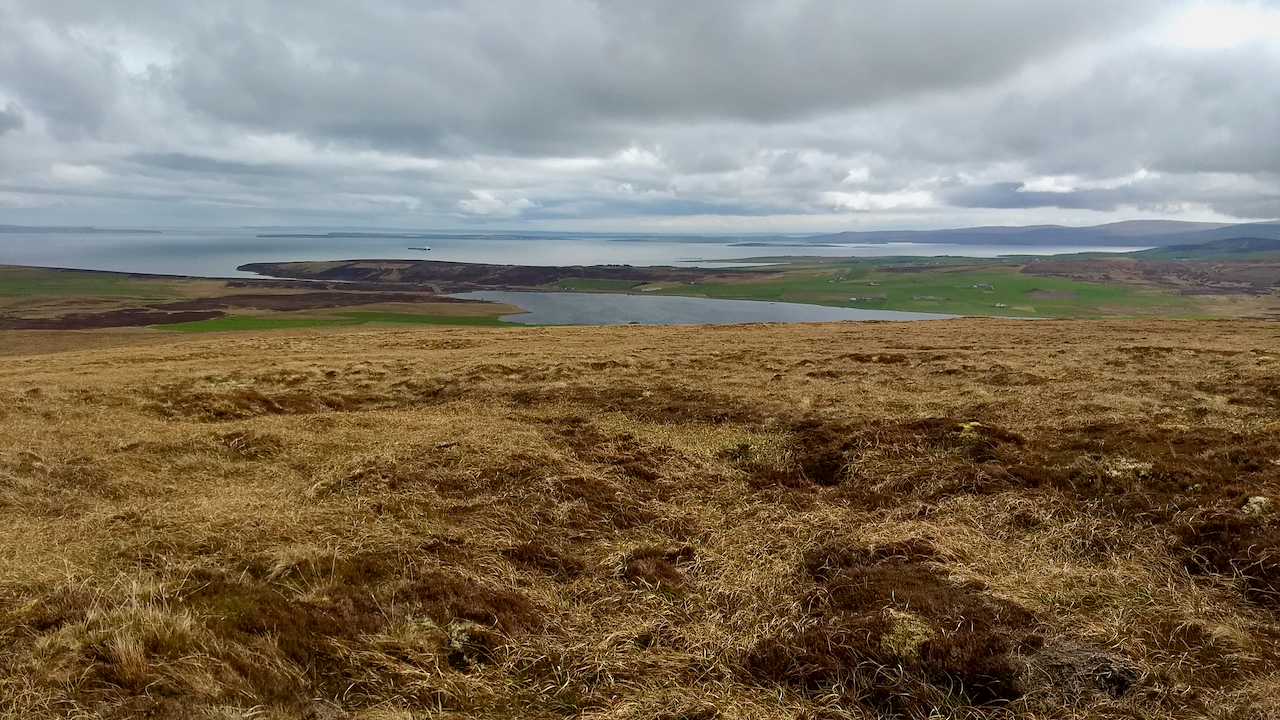 Had a lovely walk around the headland of the Deerness peninsula with its dramatic sea cliffs and geos.  One spectacular feature was a collapsed sea cave resulting in a huge chasm, 40 metres long and 25 metres deep, funnelling up the sound of waves and sea birds.

But the main photo is of Scapa Flow from Keelylang Hill, a titchy 221m high hill overlooking the campsite. But despite its size the going was very tough, particularly the direttissimo ascent.

The photo also shows the fresh water Loch of Kirbister, in the valley of Tuskerbister which is the scene of a piece interesting folk lore.

There was once a poor man from Tuskerbister who had many children, the potato crop had failed and his sheep were dying. One night, in darkest December, a strange sheep mysteriously appeared on his croft. The minister was suspicious especially when he overheard one of the children singing a song1Westwood, Jennifer and Sophia Kingshill. “The Lore of Scotland: A guide to Scottish legends”. ISBN 9780099547167 2011:

Me father’s stol’n the parson’s sheep
An’ we’ll hae mutton an’ puddin’s tae eat,
An’ a mirry Christmas we will keep,
But we’ll say nethin’ aboot it.

For if the parson gets tae know,
It’s ower the seas we’ll have tae go,
And there we’ll suffer grief an’ woe
Because we stole fae the parson.

The minister offered the little boy new set of clothes and half a crown if he would sing the same song in church the following Sunday. The boy agreed, but at the service, when the parson invited him to sing to the congregation, he sang different words:

As I was walkin’ oot one day
I spied the parson very gay:
He was tossin’ Molly in the hay —
He turned her upside down, sir.

A suit o’ claes and half a croon
Was given tae me be Parson Broon
Tae tell the neighbours all aroon’
What he hed done tae Molly!’

I’m not sure what the moral of this tale is, perhaps it’ll take more than a hypocritical parson to trick a mischievous child.